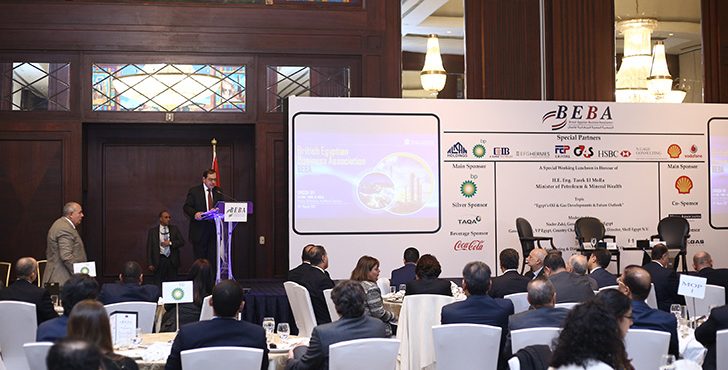 Even amid a significant dwindle in global oil and gas prices, Egypt’s energy sector is witnessing an unprecedented boost, fueling prospects for a bright petroleum industry.  On Sunday March 19th 2017, The British Egyptian Business Association, BEBA, hosted a luncheon event in honor of His Excellency, the Minister of Petroleum and Mineral Resources, Eng. Tarek El Molla, bringing together Egypt’s key industry leaders at the Conrad’s Cairo Hotel.

The event showcased the government’s achievements in the energy sector including most recent progress Egypt had reached in the development of the industry, the future of gas resources, and Egypt’s role in the regional market as an energy hub. The event came in line with the Egyptian Ministry of Petroleum and Mineral Resources’ efforts to shed the lights on arising issues in the Egyptian energy industry, in an attempt to push forward the Arab Republic’s economy following a period of political unrest.

The event kicked off with a welcoming speech by Khaled M. Nosseir, Chairman of the Board of Directors of The British Egyptian Business Association (BEBA) and a keynote speech by His Excellency, Minister of Petroleum, Tarek El Molla, who presented a general overview of the country’s oil and gas sector. In his speech, Minister El Molla praised the Egyptian government’s endeavors to bolster the country’s economy, noting that the government “has taken the necessary measures including the currency floatation.” He further outlined the government’s latest attempts in expanding and innovating the oil and gas sector in terms of energy security by boosting, diversifying, and managing the energy supply, ensuring financial sustainability, and addressing internal and external debts. Furthermore, the government contributed to the enhancement of the sector’s performance by reforming energy subsidies schemes and sector governance in terms of expanding private sector investments by streamlining current concession agreement processes and expanding the concession agreement portfolio.

Moreover, the Minister pointed out major success stories that the country marked in 2016, which includes 76 new upstream exploration agreements signed with a minimum commitment of $15.3 billion in investments and the bid rounds conducted by the EGPC and GANOPE, whereas new blocks continue to be on offer by EGPC, EGAS, and GANOPE.

In line with the Oil Ministry’s Modernization Program, which is an overhaul transformation policy to help enhance the country’s potential in the sector and thus contribute to economic prospects of the country, the ministry has embarked upon a unified strategy to achieve financial sustainability and “unlock the sector’s full value chain potential by 2021,” as Minister El Molla stated. He further affirmed that Egypt had concluded a deal with Saudi Aramco and, to date, the country had received two cargos of diesel fuel worth $340 million. He also added that he was thrilled that the import schedule with the distributors had resumed after an inexplicable halt to Aramco’s shipments in November.

Held under the patronage of H.E. Minister El Molla, the discussion panel was moderated by the Vice President, Country Chairman and Managing Director of Shell Egypt, Gasser Hanter, and General Manager of British Petroleum Egypt, Nader Zaki. The debate tackled an influential role that the energy sector is playing in the overall welfare of the country, domestic self-sufficiency in gas, and Egypt’s positioning as a regional energy hub. El Molla honored the June 30th wave of protests that brought about stability across the country and as a result, an equiponderant oil and gas market. In turn, the government was able to pay a large amount of its arrears to the foreign IOCs, bringing down the total amount of remaining dues to $3.5 billion.

The discovery of Zohr, the super giant offshore gas field, has massively transformed forecasts for Egypt’s bright future in energy self-sufficiency. Indeed, Italian Eni’s news for the field’s discovery has tipped the odds, signaling a prosperous future for the industry as a whole and for the thriving gas sector in particular. Not only did the industry eye huge cash inflows to the country, it further changed forecasts for gas production. As domestic gas demand has hiked in the last few years, El Molla affirmed that by the end of 2018 Egypt will achieve self-sufficiency in gas. The government predicts that Egypt can regain its position as a gas exporting country. The Minister said: “We believe that by 2019 Egypt will be an exporter of energy and not an importer.” As he explained, “Egypt is going to have a sufficient amount of gas from Zohr field that will ensure Egypt’s natural gas demand for decades and the rest will be used for export.”

As the country is taking favorable steps towards gas production, the country will remain reliant on petroleum exports for some time. As a matter of fact, “we [Egypt] still import 35% of our refined products,” El Molla said. Nevertheless, the government is striding forward to take strict measures to depend less on imports so that “by the year 2020, we will go down to around 5% to 7%.”

The fierce regional and international market competition has driven oil players to come up with multiple approaches to increase their efficiency in the energy industry. In this regard, the discussion brought to the table Egypt’s aspiration to become an energy hub and the government’s commitment to achieve this target. Egypt possesses many advantages that would qualify it to be a center for energy trade. Egypt’s Sumed pipeline, EDCO, and Damietta LNG plants, huge refining capacities, and the strategic location of the Suez Canal, are all factors that can turn Egypt into a hub. This is besides the North African country’s geographical location and its national gas grid. In this sense, El Molla said that the new gas law will provide independence for the private gas sector as the “law will stimulate having an independent regulator,” offering a transparent platform for suppliers to handle gas.

As the discussion came to an end, officials from the government expressed their admiration for the luncheon event. General Manager of Mass Communication at the Ministry of Petroleum and Mineral Resources, Ahmed Kowarshi, told Egypt Oil&Gas: “We are thrilled to be a part of such a magnificent event; everything is in order and absolutely top notch. The information that were stated by the Minister are very essential to all those who work in the field, and also for all the media personnel so that they would spread it to comfort the people about the entire Ministry’s progress.”