ALGERIA: A LOOK WITHIN AND A PATH FORWARD 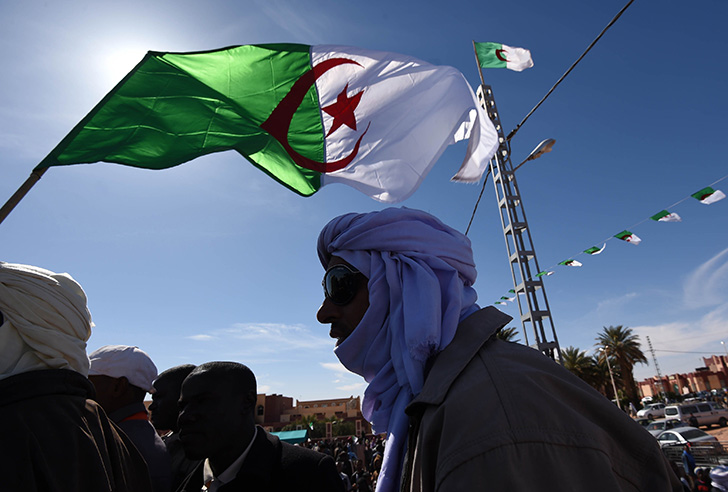 Ever since Algeria seized independence in 1962, the country has maintained a level of relative stability despite the propagating waves of the 2011 Arab spring. The North African republic is rich with abundant natural resources such as petroleum, zinc, natural gas, uranium, iron, and phosphate.

In fact, the economy of Algeria is heavily reliant on the energy sector, forming around 35% of the country total GDP and an average of 65% of its exports.  As the French colonization has seceded off the Algerian lands, the country has commenced hydrocarbon extraction activities that transformed the agriculture-based economy to industrialization.

With a population of around 40 million people across the biggest state in Africa, Algeria is one of the few African members to join the Organization for Petroleum along with Nigeria, Angola, and Libya. The energy sector proves, therefore, to be the cardinal organ for Algeria’s economy. With that said; it becomes essential to observe the factors that pull the strings of Algerian oil and gas industry.

Energy Security in a Regional Context

Although the proliferating waves of the Arab spring originated close to the Algerian borders, particularly across Tunisia, Algeria remained resistant to the rampant unstable conditions in the Arab world. But this does not corner Algeria in a no-uprising state. In fact, the Algerian government has initially realized the risk on its petroleum sector should the nation become destabilized. With this, the democratic republic, headed by Abdelaziz Bouteflika, has ensured border control since 2011 by doubling its border police (Groupement des Gardes- Frontières, GGF) to reach 135,000 men. Center of Global Energy Policy Paper – The Impact of Low Oil Prices on Algeria, published in October 2016, explained that the military spending of the North African state increased by 175% between 2004 and 2014. Bilateral Security ties were manifested in the provision of logistic support by the US and the EU as the strategic relevance of Algeria has grown in the presence of ISIS militants in Libya. For the European continent, a weakened Algeria incapable of securing its territory can create tough spillovers to the EU’s energy security reliant on its southern neighbor.

Still, Algeria’s energy sector was jeopardized in spite of the strict security measures Bouteflika has adopted. The Algerian energy fields have fell victim for security threats and political rivalries. The prominent In Amenas gas plant attack marks the most spectacular gas field attack in the North Africa’s modern history. In January 2013, around 32 terrorists launched an attack on the Tingantourine gas facility at the major In Amenas gas field, taking more than 100 expatriate personnel hostage. As the motives of the attack remain in question, operations in the field that produced 9 billion cubic meters of natural gas annually were halted, taking it three years to return to its full production capacity in 2016. This has largely influenced the gas supply in Algeria as In Amenas provided around 11.5 % of Algeria’s total natural gas output before the attack.

It goes without doubt that Algeria’s production and export capacities have been the operator engine for its economy ever since the former French colony has gained independence. The Energy Ministry has been ramping up its efforts to increase production throughout the past few decades. In 1960, average daily crude oil production stood at 181.1 thousand barrels per day. This number has gradually increased to reach 1,157.1 thousand barrels per day in 2015. This has paved the way for Algeria to be an energy exporting country and one of the main oil and gas producers in the world. But the situation in Algeria has been affected by different factors that stood as obstacles for the industry.

Beside the regional security threats surrounding the Algerian economy, the increasing number of inhabitant has had a dramatic effect on the country’s exports and the energy sector as a whole. In 2017, the United Nations estimated the Algerian population to have reached  around 41 million, which has inevitably influenced consumption patterns. As a matter of fact, domestic consumption is witnessing a steady rise, eating up around half of the total production. “Consumption of oil more than doubled in the past 15 years, passing from 0.19 mb/d in 2000 to 0.39 in 2013; over the same period, gas consumption experienced a 70% increase, from 19.8 to 33.4 Bcm/y,” stated Economics PHD Candidate Nicolo Rosetto,  in his article – Algerian Hydrocarbon Sector Struggles to Meet Expectations and Country Requirements published by Institute for International Political Studies in March 2016.

Center of Global Energy Report said that the country’s oil production has declined after witnessing a peak in the mid-2000s, whereas OPEC Statistics Bulletin depicts a notable decline in Algeria’s value of petroleum exports, falling from $51,409 million in 2011 to $21,751 million in 2015. These numbers, in fact, affirm that the rising domestic consumption has been eroding Algeria’s exporting capacity, and further hints to the unlikelihood of raising oil and gas exports potential of the country.

With this situation at hand, it becomes essential for the Algerian government to take the necessary steps to enhance its energy industry and maintain a strong stature in the oil market.

The decline in export revenues and the increase in the domestic consumption fashion are not the sole challenges facing the Algerian government. In fact, Algeria needs to offset the sharp decline in global oil prices that has largely slashed the government finances.

Bolstering the Algerian energy sector can play a key role in thrusting the country’s economy forwards. The government needs to consider venturing new exploration and production agreements, especially as the country has the potential to produce more. But in order to increase production, Algeria will need to consider new exploration and production activities that can encourage foreign investors to bring in cash flow to the Algerian industry.  The Algerian government has realized the essentiality of reforming the energy sector amid an increasingly competitive energy market. In fact, Algerian Energy Minister Noureddin Bouterfa said in early April 2017 that “Algeria could change its hydrocarbons law to boost energy partnerships with foreign firms and draw more investment into its oil and gas sector,” according to Reuters. Even though the hydrocarbon law was amended in 2013 by offering incentives to foreign companies in unconventional resources, the foreign partners have deemed the changes unsatisfactory and non-enticing to subsequent public bid rounds. Since then, foreign companies have been dealing with giant state-owned company, Sonatrach, on a bilateral-basis. This means that the government’s attempt to re-address the law became indispensable and should be acted upon in a timely-manner.

While pressures are mounting to adopt reforms to draw foreign investment, such changes would require a solid strategy to involve the European Union boosting the energy industry. This leads to the fundamental question of whether the EU would be interested in doing energy business in Algeria or not. From Europe’s perspective, investment influx in Algeria’s energy sector is a mutual advantage for Algeria and the EU. Not only does this enhance the North African economy but further protects the southern border for the EU since that extending investments increases the country’s stability. Further, the European Union’s unstable political relation with Russia prompts Europe’s member states to find a lasting supply, of which Algeria can play the leading role.

But consolidating energy ties between the EU and Algeria entails a closer look at the Algerian pipelines’ capacity to transmit gas. Indeed, the lack of wide access to the European market has notably reduced Algeria’s ability to reach significant parts there. This has further contributed to the increase in the amount of unused imports capacity there. Spain has the Maghreb-Europe pipeline that supplies gas from Algeria through Morocco and the Medgaz pipeline that connects both countries directly with a combined capacity of 23 billion cubic meters. Both Spain and Portugal combined imported 15 billion cubic meters in 2015, leaving more than 8 billion cubic meters of capacity idle. This diminishes the capacity of a pipeline and further makes it hard to allocate the maximum amount of gas flow potential the pipeline is designed for. The Center of Global Policy paper explained that the addition of a new compressor becomes essential and “can easily increase the medgaz pipeline capacity by some 4 bcm,” turning the idle capacity to a spare capacity of around 12 billion cubic meters.

Unarguably, strengthening ties with the EU for gas exports will help, but with the rising domestic consumption, the government needs to put into consideration the amount of gas that the country can be capable to export. If Algeria’s population continues to increase, its energy export capacity will sharply decline, putting self-sufficiency as a priority over exports revenues.

It is true that the Algerian government has recently embarked upon policy reforms, including the subsidy system and the financial framework, yet Algeria’s energy-reliant economy is less likely to grow as the oil prices will continue to roam around $50 per barrel. Responding to the magnitude and the persistence of the oil slump is a pivotal step for the government. Thus, the country needs to address the long standing vulnerabilities by bringing forward robust strategies to diversify the economy away from hydrocarbon dependence. This can be achieved by drafting new investment laws that can secure an encouraging business environment for investors in the non-oil industries.

Revenue-generating sectors such as Agriculture and tourism should be expanded, bureaucratic hurdles should be removed and the private sector should be given more space. With broader reforms, Algeria’s economy can witness a boost, resist a sharp slump in oil prices, and the economic model will see major changes.