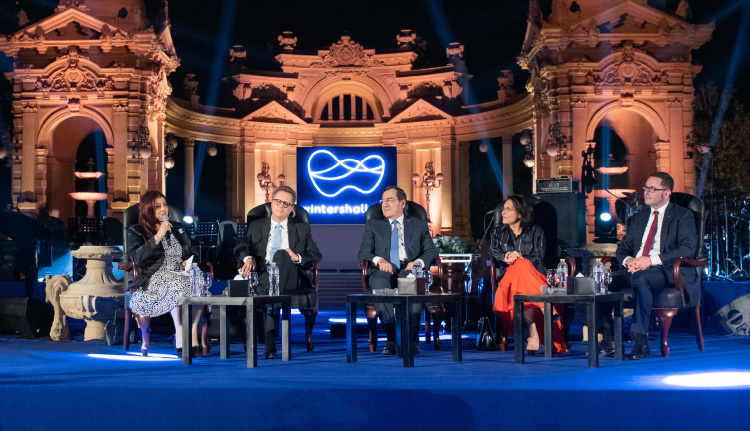 To celebrate long-term partnerships in Egypt, Wintershall Dea held a delightful evening reception that gathered the company’s partners and friends to celebrate the successful partnerships and to highlight their long-term commitment to Egypt. The celebration was held, under the auspices of the Ministry of Petroleum & Mineral Resources and the Embassy of the Federal Republic of Germany at the majestic Abdeen Palace in Cairo under the starry sky of October 11th. The event also celebrated 70 years of relations between Egypt and Germany, as well as almost 50 years of partnership between Wintershall Dea and Egypt.

The event started with an exciting tour of the royal Abdeen Palace. The celebration then showcased a short video on the successful history of Wintershall Dea, which reflected the deep-rooted Egyptian-German relationship and cooperation, especially in the hydrocarbon and energy sectors.

The talks held on the sidelines of the event accentuated Wintershall Dea’s role as a leader in carbon capture and low-carbon solutions in Europe and North Africa.

Wintershall Dea has a long history in the Egyptian energy sector and has proven committed throughout the years. “We have been here since 1974, and since we started, the country has changed tremendously. For example, when we started in 1974, Egypt had only almost 35 million people, until today the population has easily tripled. Not only the population, but also the economy has grown tremendously to different disciplines attracting billions of dollars of investments in different industries, and this would have not been possible without being fueled by energy,” Sameh Sabry, Managing Director of Wintershall Dea Egypt said during his keynote speech.

Dawn Summers, Wintershall Dea COO highlighted Egypt’s significance in the company’s business. “We operate in many countries across the world and Egypt is one of those extremely important countries and has a special place and a very important place in our portfolio.”

“For the past 50 years, almost everything has changed. One of the consistent things is our commitment to this country,” Sabry added.

In a panel discussion under the title; ‘Wintershall Dea and Egypt: Strong Partners for a Sustainable Future’, Minister of Petroleum and Mineral Resources, Tarek El Molla, highlighted the Egyptian government’s efforts to enhance investments climate and attract more investments to Egypt.

Wintershall Dea’s CEO Mario Mehren; Frank Hartmann, Ambassador of Germany to Cairo; and Houda Allal, General Director of the Observatoire Méditerranéen de l’Energie (OME) also took part in the panel that explored German-Egytpian as well as regional energy partnership and the role companies like Wintershall Dea can play in the energy transition. The panel further highlighted Egypt’s role as an regional energy hub.

“We as a government, our role is to make sure that we have the proper fiscal regime, proper legislative terms, and the right economic model with our partners,” El Molla said, highlighting the importance of stability and security, stating that “this is something that everybody will see, the stability and the security for any investor to be happy. I think that all expats here are enjoying their stay here in Egypt and they love being here,” El Molla said.

El Molla recalled some issues that Egypt faced due to gas shortages in the past, pointing out how Egypt worked day and night to overcome these challenges and to ensure energy security. “To do that we needed to make sure that we conveyed the proper message to our partners because we cannot deliver without the support of our partners,” El Molla noted.

The minister referred to the importance of border demarcation processes with neighboring countries and the formation of regional and international strategic relations based on trust and mutual benefit, whether within the framework of the East Mediterranean Gas Forum (EMGF) or outside it. El Molla insisted that the system of cooperation and integration between petroleum sector companies and foreign companies resulted in the implementation of large projects. In the field of research and exploration, 108 agreements have been signed with a minimum investment of $22 billion over the last 8 years.

Egypt has been a committed partner to its business and investments, which earned the energy companies’ trust in the sector. “We have been able to demonstrate to the world that we can be reliable, and not only that this country and this industry is worth investing in and worth putting hand in hand together for the growth, ” El Molla noted.

We have a long and successfull history as a reliable partner for Egypt’s energy sector. Today with a clear focus on natural gas, produced in the most efficient and responsible way. And we are looking ahead to a future, where we are delivering low-carbon hydrogen and Carbon Capture and Storage projects at scale. In this regard, we have signed an Memorandum of Understanding with our trusted Egyptian partner EGAS this year.”

The German and Arab leaders discussed natural gas supply to Europe. Germany plans to diversify its energy mix over time. As part of its sustainability plans, Germany looks forward to increasing gas contribution in their energy mix “from 38%, doubling to 80% of the energy mix. This is due to be realized until 2030,” Hartmann stated.

The Ambassador explained that Germany has been working to secure the gas supply for this year, expecting that with the agreements with Egypt, Israel, and the European Union (EU), “the supply will be there, but the prices have exploded,” adding that “the government is trying to compensate heavily the exploding gas prices by subsidies to the consumers and also to the industry.”

The panel was in agreement of the significance of carbon management plans and sustainability strategies, showcasing the energy and hydrocarbon sectors’ efforts toward energy transition.

Hartmann talked about the energy transition, pointing out that “for the industries that are highly affected, you cannot switch from gas to renewables in the petrochemical business, that is impossible,” and that “gas will be needed in the future, and we cannot only want to transform to renewables.”

He stated that Egypt and Germany are keen to cooperate to achieve energy sustainability. “Sustainable energy is at the heart of our cooperation, with the German companies, and also the German government, we did contribute a lot in the last 25 years in the field of energy going back even to the Aswan Dam and the Turbines in the 1950th and later on to Assiut Dam and many other examples. We are entering a new technological era and we want to contribute. I think our companies and namely Wintershall Dea, are positioned to contribute a lot technologically to make Egypt a successful country in the energy transition, which is due to come,” Hartmann explained.

In her keynote Summers highlighted Wintershall Dea’s insights on energy transition. “Security of supply of energy and achieving our climate goals are extremely important and Wintershall Dea is absolutely focused on ensuring that we are part of the solution, and also deliver on a sustainable future for our economies, our communities, and for the future of our industry.”

COP27: A Chance for Cooperation

Looking forward for cooperation and new partnerships for carbon management and clean energy, Egypt is hosting the 27th climate summit (COP 27) in Sharm El Sheikh City in November. “COP27 is a chance for our region, but it’s happening even in this difficult moment and it is important to (not only) bring the voices of the realists, but also the optimists,” Allal stated.

Germany is also excited to participate in the climate summit and to offer its technology for a green prosperous future. “We all know that we are looking to the upcoming COP27, and we are also bilaterally heavily working in contributing our technology into the new fields of green hydrogen and the huge projects, a few people around here this evening are highly engaged in these projects in cooperation with the Ministry of Petroleum, and also the Ministry of Electricity,” Hartman noted.

At the end of the event, the celebration was crowned by Sabry signing a letter of intent (LoI) with Magdy Galal, Chairman of the Egyptian Natural Gas Holding Company (EGAS). The LoI reflects Wintershall Dea’s commitment to decarbonization and how it supports Egypt in its carbon management plans.

The signed LoI aims to significantly reduce operational greenhouse gas emissions at the Disouq concession, using the company’s expertise, such as the methane Leak Detection and Repair Program (LDAR)  in Egypt, to achieve this goal. This comes as Wintershall Dea works hand in hand with Egypt to identify low-carbon energy projects for a green future.

The LoI fits within the Ministry of Petroleum’s efforts in cooperation with its entities and global partners, as well as all elements of the Egyptian oil and gas industry, to enhance production activities, curb and control carbon emissions, as well as economic exploitation of flare gas.

The celebration ended with fine music by the Egyptian-German band Cairo-Steps, performing a concert in the outdoor garden of the magnificent Abdeen Palace. The event was a great occasion for not only confirming, but also renewing the promise for committing to the mutual goals for a better zero-carbon future.