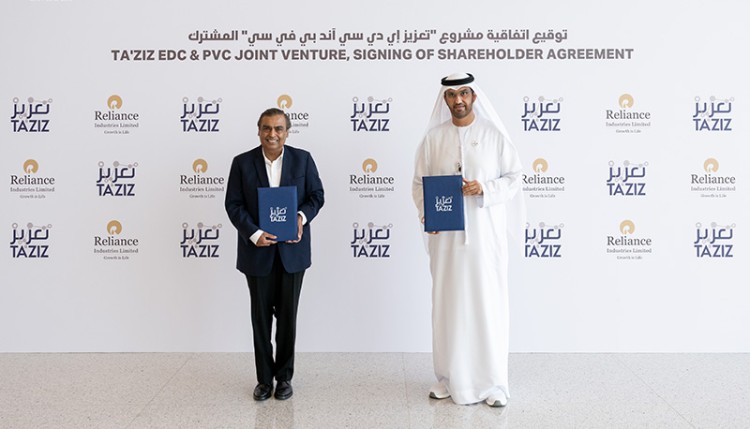 The TA’ZIZ EDC & PVC joint venture will build and run a Chlor-Alkali, Ethylene Dichloride (EDC), and Polyvinyl Chloride (PVC) production facility (AED 7.34 billion). For the first time, these chemicals will be manufactured in the UAE, opening up new revenue streams and opportunities for local producers to “Make it in the Emirates.”

Mukesh Ambani, Chairman and Managing Director of Reliance and Sultan Al Jaber, Minister of Industry and Advanced Technology and ADNOC Managing Director and Group CEO exchanged a signed framework agreement between ADNOC and Reliance to explore collaboration in Abu Dhabi in the exploration, development, and production of conventional and unconventional resources, as well as in decarbonization of operations, including carbon dioxide (CO2) sequestration.

The TA’ZIZ EDC & PVC project is making good progress toward the detailed design phase in preparation for the Final Investment Decision (FID) later this year.

Ambani also met with Masdar CEO Mohamed Jameel Al Ramahi to discuss potential collaboration opportunities in renewable energy and green hydrogen, both of which are top objectives for the UAE and India. According to the UAE’s “Hydrogen Leadership Roadmap,” Mr. Ambani was briefed on the country’s ambitious goals to develop its world-leading renewable energy portfolio and strengthen its clean hydrogen production capabilities.