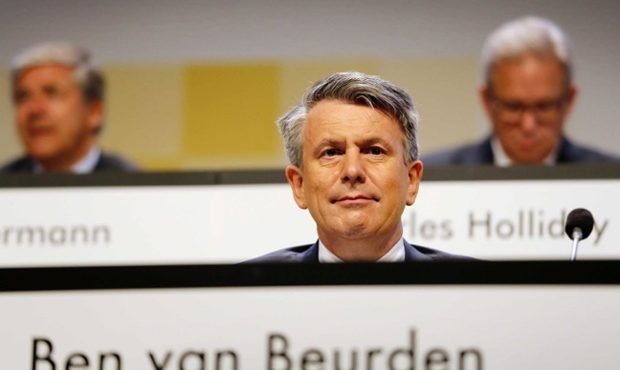 European oil majors are for the first time openly declaring interest in Iran in anticipation of a possible end to sanctions against the country over its nuclear program.

Leaders of Royal Dutch Shell Plc, BP Plc and Total SA all said Wednesday they were ready to return to the nation with the world’s second-largest natural-gas reserves and fourth-biggest oil cache, after similar comments by Italy’s Eni SpA last month.

U.S. oil companies, constrained by the history of American sanctions against Iran dating from the 1979 Islamic revolution, are more cautious in their statements on a return. The current curbs have prevented investment in Iran for a decade.

“Iran is a wonderful country with a fantastic resource base,” Ben van Beurden, chief executive officer of The Hague-based Shell, said in an interview in Vienna at a conference of the Organization of Petroleum Exporting Countries. “As soon as there is legitimate opportunity, we will be looking at Iran.”

“Everybody” in the oil industry wants to go back to Iran once the international sanctions have been lifted, he said.

European companies were guarded over Iran until now. Yet, with Iran holding the largest gas reserves behind Russia and the biggest stash of oil after Saudi Arabia, Venezuela and Canada, the prospect of an end to sanctions has given the energy operators renewed purpose.

BP CEO Bob Dudley said the London-based company would be “very much” interested in investing in Iran when sanctions go. Still, with talks between the U.S. and Iran over their nuclear dispute ongoing, any talk of deals remains premature, he said.

Iran, for its part, sees the return of foreign firms as the key to reviving its oil industry. The government has circulated drafts of oil-contract terms, suggesting it’s expecting to seal an atomic deal. Iran needs $200 billion of investment in its oil industry, Oil Minister Bijan Namdar Zanganeh said last month.

Companies, cautioning that the country needs to offer more competitive terms than the last time foreigners invested in the country, say terms mooted by Tehran are indeed more generous.

While the previous buy-back contracts had merely paid a set fee for the delivery of a project, the latest deals may give investors some share of a field’s production and allow companies to book more reserves on their balance sheets. Iran has yet to announce final conditions for the return of foreign oil groups.

“If U.S. companies are allowed to go back in and at some point in time that gets resolved, certainly we will would think about it,” Lance said in Vienna. A $1 billion deal Conoco signed in 1995 to invest in Iran’s energy industry was quickly canceled under pressure from the White House and shareholders.

After that Iran turned to European and Asian investors. The country now pumps 2.8 million b/d, down from more than 4 million a decade ago and a peak of 6 million in 1974.

The International Energy Agency has said Iran’s largest fields, including Gachsaran and Marun in production for more than 50 years, are in “sore need” of rehabilitation.