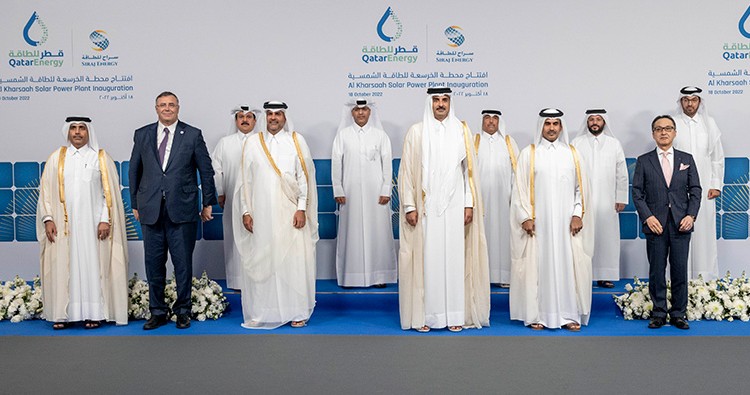 The plant was launched at the ceremony, marking the end of construction and its connection to the national grid.

The Al Kharsaah project, which has 800 MWp of installed solar capacity, is Qatar’s first significant photovoltaic plant and is situated 80 km to the west of Doha. The plant was constructed on a 1000-hectare terrain, equivalent to approximately 1400 football pitches, and integrates 2 million high-efficiency bifacial modules mounted on single-axis trackers. These panels, equipped with photovoltaic cells on the front and back, capture the sun’s direct rays on one side, and capture the rays reflected on the ground thanks to the other side, thus optimizing electricity production.

Al Kharsaah can supply 10% of the country’s peak power consumption and will avoid 26 million tons of CO2 emissions during its lifetime.

“After our recent entry in the giant LNG projects NFE and NFS alongside QatarEnergy, we are proud to announce today the start-up of the Al Kharsaah solar plant. This giant project, which contributed to the sustainability roadmap of Qatar, demonstrates once again TotalEnergies’ ability to support producing countries in their energy transition by combining natural gas production and solar energy to meet the growing demand for electricity”, said Patrick Pouyanné, Chairman and Chief Executive Officer of TotalEnergies. “This is another milestone in our long-standing and trustful relationship with QatarEnergy, also bringing us closer to our goal of 35 GW of production capacity by 2025”.