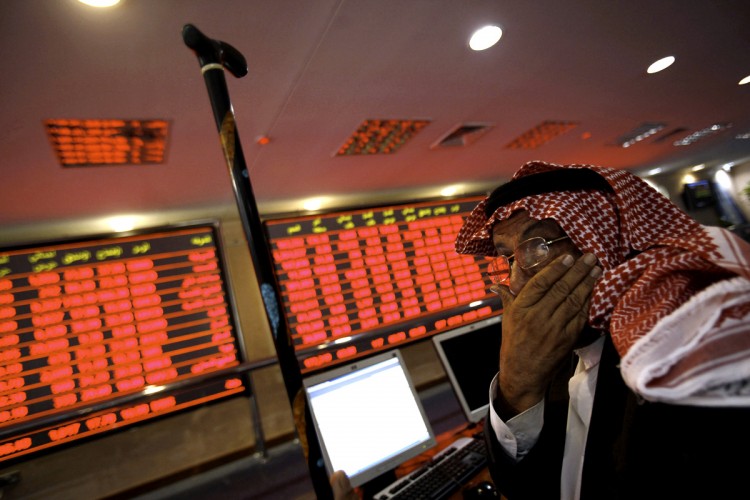 Brent oil, which fell 9% last week, edged down 0.6% in Asian trade on Monday. Traders said the price falls were due to diminishing spare capacity to store excess oil as well as the strong U.S. dollar.

With the earnings season largely over, Gulf markets appear to be lacking fresh positive catalysts and have started moving in line with oil again.

Dubai was particularly volatile on Sunday and dropped 2.5% to a three-month low of 3,614 points.

Emaar Properties, the emirate’s biggest listed developer, may come under selling pressure on Monday after it said it was not involved in a project to build a new capital city in Egypt, contrary to recent UAE and Egyptian media reports.

Builder Arabtec may also be vulnerable to negative sentiment as it has yet to announce any progress in resolving the latest dispute that stalled its $40 billion Egyptian housing project. Arabtec has yet to post fourth-quarter results.

Meanwhile, positive momentum from the weekend investment summit may continue to support Egypt’s market. Prime Minister Ibrahim Mehleb said on Sunday that investment deals worth a total of $36 billion were signed at the summit.

The deal announcements were carefully orchestrated and some were not new, but even so, the success of the conference may remain a bullish factor for stocks in coming days as investors speculate about which companies will benefit.

Orascom Telecom, Media and Technology may attract interest after its chief executive Naguib Sawiris told Reuters he was ready to invest $500 million in Egypt and was diversifying his telecommunications business into infrastructure, energy and transportation.

On global markets, Asian equities barely moved on Monday morning. Investors’ main focus this week is on the U.S. Federal Reserve’s two-day meeting, beginning on Tuesday; after successive months of strong jobs data, expectations have been growing that the Fed will point towards a June interest rate rise.