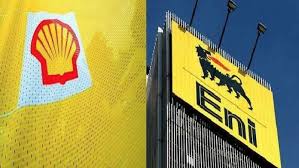 According to ABC News, Both companies have denied any wrongdoing.

The European oil majors gave that sum to former Nigerian oil minister Dan Etete, his Malabu Oil & Gas Ltd. and others in relation to the purchase of Oil Prospecting License 245 and “thereby committed an offence,” according to documents from the Federal High Court in Abuja.

“Eni reaffirms the correctness of its conduct within the acquisition of the license,” the Italian oil producer said in an emailed statement on Friday. The company said it hasn’t been notified of any charges relating to the deal.

The latest charges come after a Nigerian court in January ordered Eni and Shell to temporarily cede control of the jointly owned license to the government pending investigations. The $1.1 billion acquisition of the deep-water Gulf of Guinea license — estimated to hold at least 9 billion barrels of crude reserves worth $1 trillion — violated tax regulations and a law promoting Nigerian ownership, according to a 2013 report by lawmakers who recommended the deal be revoked.

Eni Chairwoman Emma Marcegaglia on March 1 urged investors to back Chief Executive Officer Claudio Descalzi for another term after the Italian oil major reported fourth-quarter profit that was more than double analysts’ estimates. A U.S. law firm found no evidence of illicit conduct following a company-led probe into the corruption allegations, Marcegaglia said.

The Italian government, Eni’s biggest shareholder, is set to decide whether to reappoint the company’s board this month.

In related news, Nigeria ceded control of one of the richest oil blocs on the continent – the Oil Prospecting License 245 bloc (OPL 245) and the country is to prosecute oil giants Royal Dutch Shell and Italian Eni in a corruption scandal worth around $1.2b.