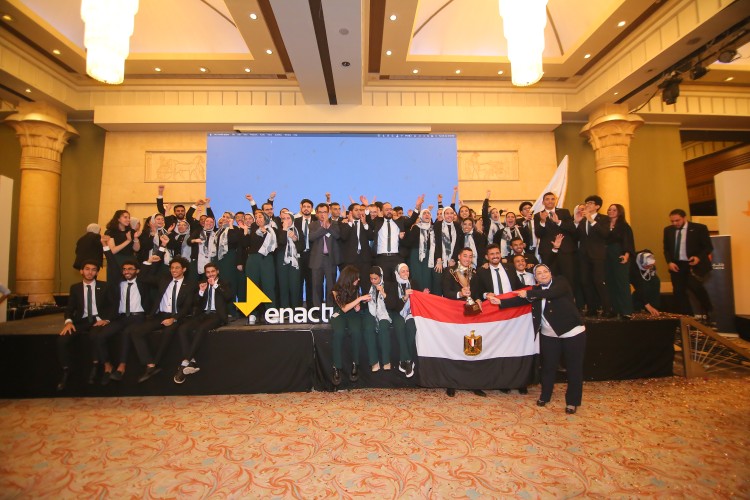 ExxonMobil Egypt proudly joined the final round of Enactus Egypt’s annual national competition, bringing together 1,200 students. Ain Shams University Enactus team is the national champion of this competition with an innovative project entitled “Crevita”, for the use of crayfish shells in multiple applications, including poultry feed and bio-pesticides, among other uses.
“I witness with great respect the passion and commitment of Enactus undergraduate students to contribute to society with amazing entrepreneurial skills,” Youssef Hafez, Board Member, Public and Government Affairs Manager of ExxonMobil Egypt, commented.
“My colleagues and I volunteer in the judging panel of this competition, an activity we all looking forward to at ExxonMobil Egypt. We also believe in the importance of the impactful General Orientation Training that the company sponsors: it helps participating students develop competencies in areas such as market economy, entrepreneurship, success skills, innovation, and project management,” Hafez added.
Moreover, Hafez expressed his appreciation of the 12-year cooperation with Enactus Egypt, adding: “We value the longstanding cooperation with such a pioneering organization, during which we worked to develop youth capabilities, promoting free enterprise and social entrepreneurship.”
Furthermore, Fatma Serry, President and CEO of Enactus Egypt, referred to the fruitful cooperation with ExxonMobil Egypt since 2010, saying “We highly appreciate ExxonMobil Egypt’s participation as members of the jury. We also praise the efforts made by the company as a sponsor of Enactus Egypt activities. Enactus Egypt holds an admirable track record in this competition: Egyptian teams won the World Cup 5 times since the establishment of Enactus in Egypt, an evidence of the pioneering role of this organization.”
On July 18th, 28 teams from different universities competed in the opening round of Enactus Egypt national competition, where only five teams qualified for the final round. The national champion team demonstrating leadership in entrepreneurial projects with the most sustainable impact on society will represent Egypt in the World Cup organized in Puerto Rico by the end of October 2022.
ExxonMobil Egypt is engaged in community investment activities focusing on youth capacity building and supporting entrepreneurship. Volunteers from ExxonMobil Egypt participate on an annual basis with student teams and young startups through the company’s community investment programs, in line with Egypt’s Vision 2030.