Eni has signed an agreement with Tunisia for transporting Algerian natural gas, the Italian company said in a statement.

The deal aims at the management and modernization of the trans-Tunisian gas pipeline to transport Algerian natural gas to Italy through Tunisia until 2029.

The pipeline has a transport capacity of approximately 34 billion cubic meters per year, the trans-Tunisian pipeline consists of two lines, 48 inches wide and around 370-kilometer long, from the Algerian-Tunisian border near Oued Saf to the Cap Bon headland, as well as five compression stations. 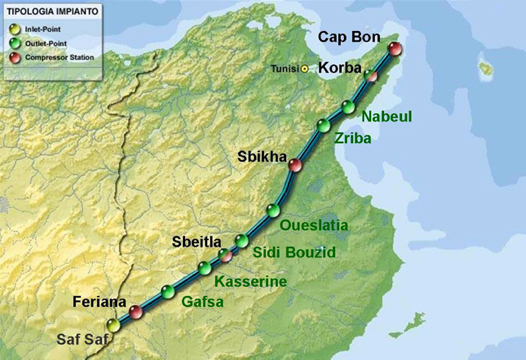 With this agreement, Eni will operate the pipeline for the next 10 years, ensuring reinvestment for infrastructure through its subsidiary Trans Tunisian Pipeline Company (TTPC).

The agreement confirms Eni’s commitment in hydrocarbon exploration and production (E&P), as well as transport infrastructure, marketing petroleum products, as well as chemical and energy projects in North African countries, the company stated