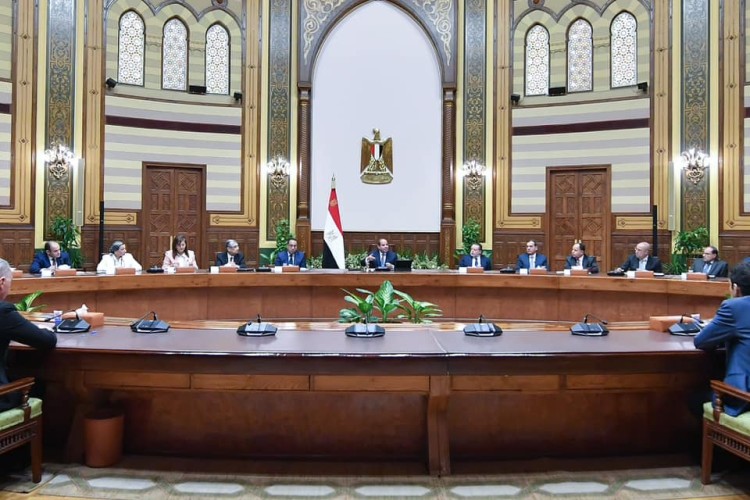 President Abdel Fattah El-Sisi met with Egyptian businessmen and investors from different industrial sectors, in the presence of the prime minister, the acting governor of the Central Bank, and the presidential advisor for urban planning. The ministers of electricity and renewable energy, petroleum and mineral resources, planning and economic development, finance, environment, housing, utilities and urban communities, and trade and industry have also attended the meeting, Presidential Spokesman Bassam Rady said on his official facebook page.

During the meeting, President El-Sisi affirmed the country’s keenness on the direct interaction with the investors who support the comprehensive development strategy of Egypt.

During the meeting, President El-Sisi affirmed the state’s interest to encourage investments and to deal decisively with all the concerns facing businessmen, particularly in light of their effective contributions to the gross domestic product and employment rates and their administrative and organizational capabilities.

In this regard, the President also reviewed the development reforms and measures the government adopts to support and encourage serious investments and to help the private sector overcome obstacles. This is in addition to the state’s efforts to improve the infrastructure, mainly in ports, airports, road network and modern transport system. This also includes the huge development in customs and tax system as well as the legal frameworks and regulations.

The ministers shed light on the developments of the economic scene and the promising investment opportunities available in the Egyptian market in various sectors. They also presented Egypt’s current capacities which have contributed to attracting more foreign and local investments. The ministers also reviewed efforts made at various levels in Egypt to stimulate the economy sectors, including tax and customs amendments, mechanization expansion, and dataflow management, among others.