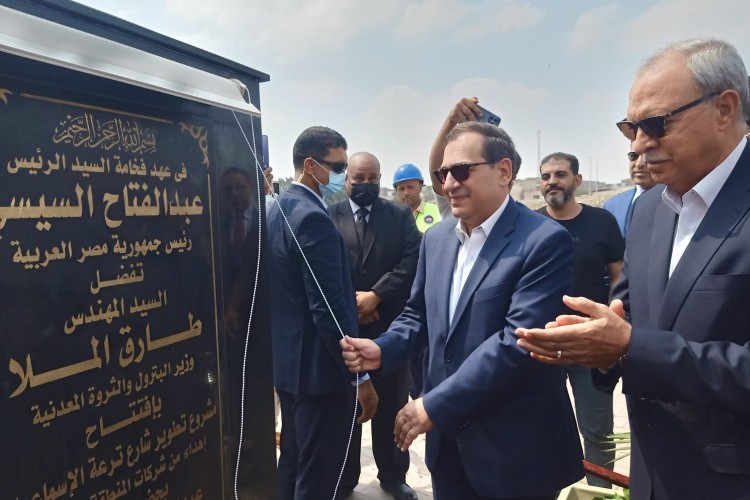 Minister of Petroleum and Mineral Resources Tarek El Molla, Qalyubia Governor Abdel Hamid El Hagan and leaders of the oil and gas sector inspected the development projects in the petroleum geographic area within the Mostorod region, which is a major area serving Greater Cairo and constantly witnessing an increase in its refining, marketing and distribution capabilities, the ministry said in a statement.

El Molla and the governor inaugurated the Ismailia Canal Road in the Mostorod region, which the petroleum companies in the region financed its development and raised its efficiency in a manner that suits the region. In addition, the warehouses of the Co-operation Petroleum Company were opened in the region after the completion of development work and raising its operational efficiency. The Minister also inaugurated a project to recover flare gases at the Cairo Oil Refining Company (CORC) and laid the foundation stone for the expansion of the petroleum geographical area in Mostorod.

At the beginning of the tour, El Molla chaired the meeting of the Petroleum Geographical Committee in the Mostorod region, in the presence of the Governor of Qalyubia and the heads of the petroleum companies operating in the region.

After the meeting, there was an inauguration for a project to rehabilitate, develop and expand the Ismailia Canal Road, the corniche and urban area to serve the people and the region, and to develop, secure and raise the efficiency of the roads surrounding petroleum facilities.

The governor explained that coordination and cooperation is continuous and distinct with the Ministry of Petroleum and Mineral Resources, which supports the development of the petroleum geographical region, which includes 8 integrated companies that play a vital role in the field of manufacturing, transporting and securing supplies of various petroleum products to Egypt, especially to the Greater Cairo region, which includes an important part of the Qalyubia Governorate.

The minister and governor also inspected the integrated supply station Misr Petroleum – Gastec in Mostorod area, which was developed within a plan to develop, modernize and raise the efficiency of car refueling stations on the Ismailia Canal Road.

El Molla also inaugurated a project to modernize, develop and raise the efficiency of the warehouses of the Cooperation Petroleum Company in Mostorod.

The minister further inaugurated the Zero Flare gas recovery project at CORC. El Molla explained that the project comes in implementation of the strategic programs for developing and modernizing the petroleum sector to raise the efficiency of the refineries’ work and energy efficiency, as it achieves a positive return on the environmental and economic levels through its role in reducing the emissions of gases associated with industry in order to preserve the environment and achieve sustainability while reusing it as fuel to rationalize consumption.

El Molla listened to a technical and clarification explanation about the new project, which has an investment cost of EGP 150 million, and includes a unit with a capacity of 4 tons of gases per hour, divided into two parts.

El Molla also inspected the works of developing the firefighting water network to serve the petroleum geographic area in Mostorod, which is implemented by Petrojet.