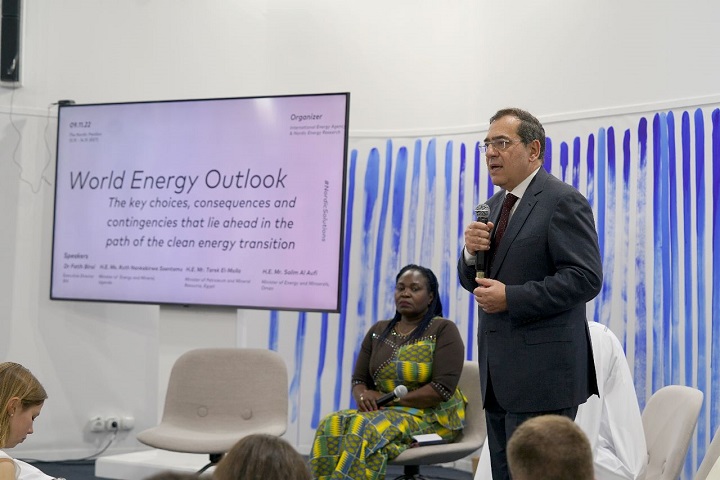 During his participation at COP27, Minister of Petroleum and Mineral Resources Tarek El Molla emphasized the importance of regional and international dialogue in energy transition as well as the expansion of technological capabilities and provision of investments needed to achieve transition goals.

He elaborated that this is especially the case in developing countries that still depend mainly on fossil fuels in their economies.

The minister stated that technological development has contributed to reducing the cost of energy production from renewable resources in light of the high prices of fossil fuels globally at the present time.

This came during El Molla’s speech to the session “World Energy Outlook: the Key Choices, Consequences, and Contingencies that Lie Ahead in the Path of the Clean Energy Transition,” which was organized by the International Energy Agency within the activities of the Funding Day at the COP27 Climate Summit held in Sharm El-Sheikh in the presence of the Agency’s Secretary-General, Fatih Birol, Salim bin Nasser Al Aufi, Minister of Energy and Minerals of the Sultanate of Oman, and Ruth Nankabirwa, Minister of Energy and Mineral Development of the Republic of Uganda.

El Molla pointed out that Egypt and a number of African and Middle Eastern countries have begun the stage of energy transition and the development of renewable energies in parallel with the development of fossil fuel sources such as natural gas in environmentally responsible ways and by using technological means to reduce emissions in order to meet the needs of future generations.

The Egyptian minister explained that Egypt, for example, has huge solar energy projects, and yesterday signed new agreements with Saudi Arabia and the UAE in this field with huge investments to produce about 20 gigawatts, in addition to agreements in the field of hydrogen production. He added that natural gas, a cleaner fossil fuel, will remain an important part of the energy mix now and for the decades to come, according to forecasts by the International Energy Agency (IEA).

During the session, the participants pointed out the importance of taking into account the conditions and rights of developing countries in the energy transition and supporting them with the necessary financing and technologies to enable them to catch up with the efforts to transform to green energy.