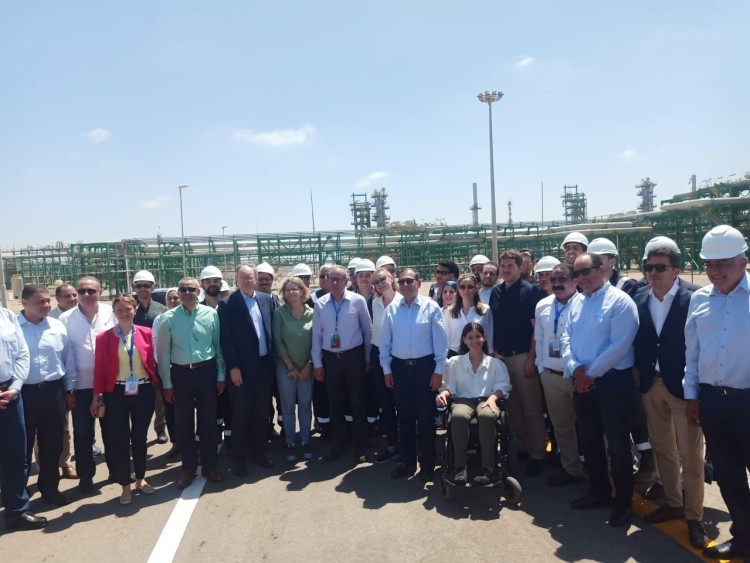 Osama Mubarez as Secretary-General of the East Mediterranean Gas Forum (EMGF), Kadri Simson, Commissioner for Energy and Climate of the European Union (EU), Karine Elharrar, Israeli Minister of Energy, and Christian Berger. Ambassador of the EU in Cairo, also took part in the tour.

It began with an inspection of the liquefaction plant in Damietta, where the minister and his companions listened to a presentation about the plant, which is located northwest of Damietta port on the Mediterranean and is characterized by its proximity to the Suez Canal, which makes it attractive to gas activities, and its current production capacity is about 5.2 million tons annually of liquefied natural gas (LNG).

A presentation was also made about the Zohr field, which is located at a distance of 200 kilometers from the coast of Port Said and at depths of up to 4,100 meters, under the sea in the Shorouk concession area.

El Molla clarified that the liquefaction complexes in Damietta and Idku are among the most important pillars of the facilities and infrastructure that Egypt possesses for trading natural gas and that it enjoys its position between gas producers in the Mediterranean and major consumers in the European continent.

He added that the liquefaction complex in Damietta represents one of the main pillars owned by Egypt and has an important role in Egypt’s national project as a natural gas trading hub.

During the visit, Simson praised the infrastructure in the gas industry that Egypt enjoys, which will contribute positively to strengthening and supporting cooperation between Egypt and the EU in the various natural gas activities. She also praised the advanced technologies in the Zohr field project and the ability of Egyptian cadres to operate one of the most important discoveries that were made in the eastern Mediterranean region.

Meanwhile, Elharrar said that the liquefaction complex in Damietta contributes positively to the joint benefit from the gas resources and the currently available infrastructure in meeting part of the European market’s supply of gas. She added that coordination between the member states of the EMGF will benefit all parties from current and future gas production from new discoveries in the region through the infrastructure owned by Egypt in the gas industry.