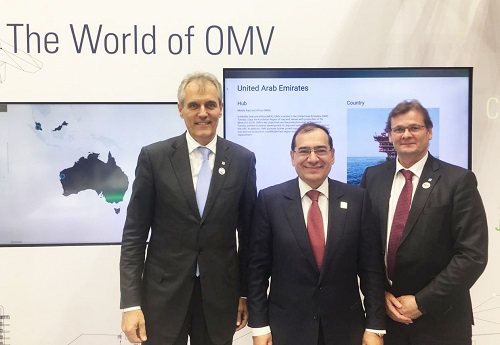 Egypt’s Minister of Petroleum and Mineral Resources, Tarek El Molla has discussed with high-profile CEOs means of attracting foreign investments to the oil and gas sector in Egypt in light of the promising investment market at the petroleum sector here, a press release said on September 11.

El Molla has met Claudio Descalzi, CEO of Eni, an Italian international oil company (IOC). The meeting, held on the sideline of the 24th World Energy Congress, held in Abu Dhabi, touched on bolstering the Italian investments in Egypt in the domain of marketing and distributing oil products as well as exploring crude oil to increase the oil production and reserves.

Descalzi confirmed that Eni will expand its investments in Egypt in the near future, given Egypt represents one of the most important markets worldwide, adding that Eni is interested in exploring and developing crude oil in the Western Desert.

El Molla also met Minister of State in the United Arab Emirates and the CEO of the Abu Dhabi National Oil Company (ADNOC Group) Sultan Ahmed Al Jaber. The meeting tackled a number of investment opportunities between the two sisterly countries. For his part, Al-Jaber hailed the economic reform in Egypt which made Egypt an attractive hub for foreign investments in the field of energy, referring that ADNOC is interested in maximizing its investments in Egypt.

Both officials wrapped up the meeting after agreeing to study the idea of forming a partnership between ADNOC and the petroleum ministry in the field of trading oil products and other activities related to fueling ships.

Le Peuch expressed his company’s keenness to enhance cooperation with Egypt and to invest in its human resources to attract investment that drives the company.

Schlumburger’s CEO stated his support for digital transformation in the Egyptian oil and gas sector as he reviewed the joint e-portal project to market oil exploration, which is in line with the global digitization trend.