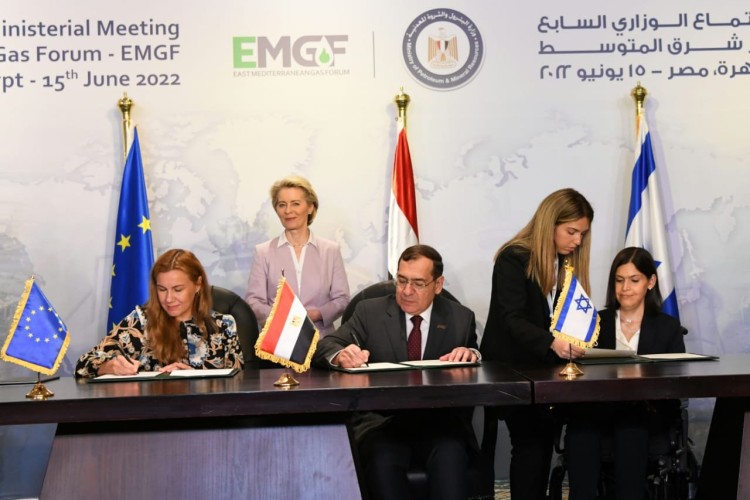 Minister of Petroleum and Mineral Resources Tarek El Molla signed a tripartite memorandum of understanding (MoU) with Karine Elharrar, Israeli Minister of Energy, and Kadri Simson, Commissioner for Energy and Climate of the European Union (EU), in the presence of Ursula von der Leyen, President of the European Commission.

The MoU was signed to promote cooperation in the trade, transport, and export of natural gas between Egypt, Israel, and the EU under the umbrella of the Eastern Mediterranean Gas Forum (EMGF).

El Molla stated that the signing represents an important step in the process of building the forum, which began four years ago, and it is a step that can be built upon in achieving more cooperation between member states and participants in the EMGF, including the EU.

Meanwhile, Elharrar noted that the signing that took place with Egypt and the European Commission represents an important message for the success of cooperation under the umbrella of the forum. It emphasizes the forum’s pivotal role in securing energy supplies to Europe and exploiting the region’s potential. Moreover, it also supports the role of Egypt and Israel as important players in the gas market.

Elharrar also explained that the agreement with the EU would continue for three years with an automatic two-year extension.

Von der Leyen expressed her happiness at attending this signing, which represents an opportunity for everyone to cooperate, especially since the signing of the MoU comes at a difficult time for the EU, which is looking to secure reliable sources of energy supplies.

The cooperation between the Eastern Mediterranean countries in infrastructure, and the efficient investment will emphasize the implementation of energy projects and the provision of new and balanced energy resources to consumers, von der Leyen stated. She also emphasized the importance of clean energy resources and the expansion of the use of hydrogen as the energy of the future. The EU is currently cooperating in developing a hydrogen strategy in Egypt, which will be launched at COP 27 to benefit the people of all countries around the world, she added.