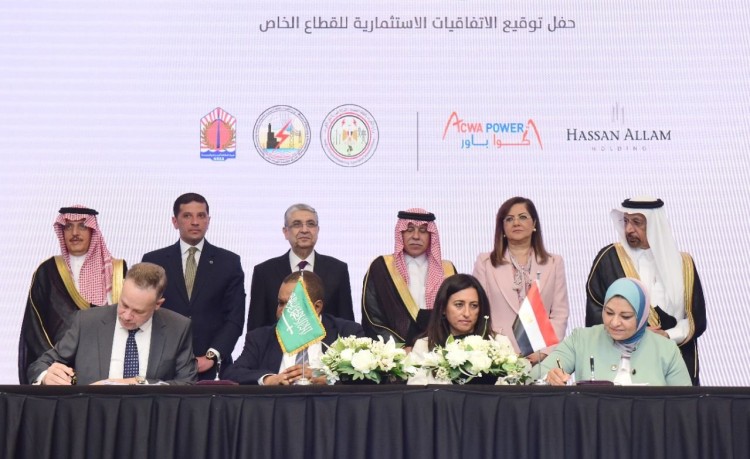 The General Authority for Investment and Free Zones (GAFI) witnessed the signing of 14 agreements covering several investment fields between a group of government and private agencies in the Arab Republic of Egypt and the Kingdom of Saudi Arabia, at a value of $7.7 billion.
The signed agreements covered sectors of infrastructure, logistics, port management, food industries, pharmaceuticals industry, conventional and renewable energy, electronic payment system and financial and information technology solutions.
The agreements and memoranda of understanding (MoUs) were signed by Saudi investment groups with the Egyptian government and private agencies, in the presence of Mohamed Shaker, Egyptian Minister of Electricity and Renewable Energy, Hala Al-Saeed, Minister of Planning and Economic Development, and Mohamed Abdel Wahab, GAFI Chairman.
Abdel Wahab indicated that the agreements represent a qualitative leap in the investment relations between the two countries.
The agreements included the signing by ACWA Power, the Egyptian Electricity Holding Company (EEHC), and Hassan Allam Holding, of an agreement for the generation and transmission of electricity from wind energy with an installed capacity of 1,100 megawatts.
Alfanar International Development Company also signed two agreements, the first with the Arab Organization for Industrialization to produce wind energy and green hydrogen, and the second agreement with Bunya Group in the field of information technology and digital solutions.
Additionally, Ajlan & Bros Holding Group signed several investment agreements with the Egyptian side, in the fields of petroleum products, infrastructure, renewable energy, logistics, food industries, food security, pharmaceutical industry, automobile industry, and the entertainment industry.