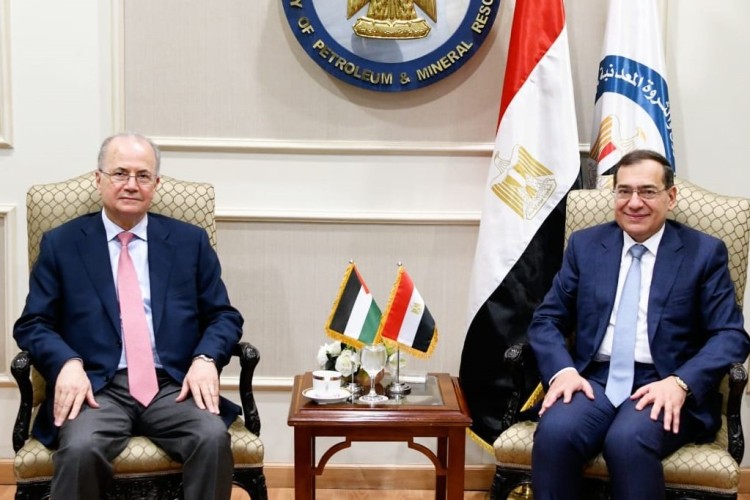 Minister of Petroleum and Mineral Resources Tarek El Molla held a meeting with Muhammad Mustafa, Advisor to the Palestinian President for Economic Affairs and Chairman of the Board of Directors of the Palestinian Fund, during which they discussed a number of issues related to joint cooperation in the fields of oil and natural gas and the East Mediterranean Gas Forum’s (EMGF) activities.

The meeting came on the sidelines of their participation in the ministerial meeting of EMGF, which will be held on Wednesday, June 15th.

El Molla pointed out Egypt’s firm position and support of Palestinian rights, including its inherent right to exploit its natural resources and sovereignty over those resources, foremost of which is the Gaza Marine field. In addition, he asserted that Egypt does not hesitate to support everything that can contribute to the development of Palestine’s economy.

The two countries enjoy strong relations supported by the political leadership in the two countries and their cooperation together under the umbrella of the EMGF, which adopts just objectives that achieve the interests of all its member states, El Molla noted.

Meanwhile, Mustafa highlighted the strength and vitality of the relations between the two countries and their strong support and fruitful cooperation. He also referred to Palestine’s participation as a founding member of the EMGF, and also the constructive cooperation with the Egyptian Ministry of Petroleum and Mineral Resources in the fields of the oil and gas industry. Mustafa further emphasized the importance of seeking assistance of Egypt’s expertise in light of the successes it has achieved.

The two sides agreed on the importance of further supporting the role of the Forum for more constructive visions and ideas to exploit the existing capabilities of hydrocarbon reserves in the Eastern Mediterranean region in a manner that achieves the interests of the Forum countries and secures part of the energy supply. This comes as the current global changes have highlighted the importance of fair cooperation among all for the sake of stability and prosperity of countries and people, and achieving development goals.