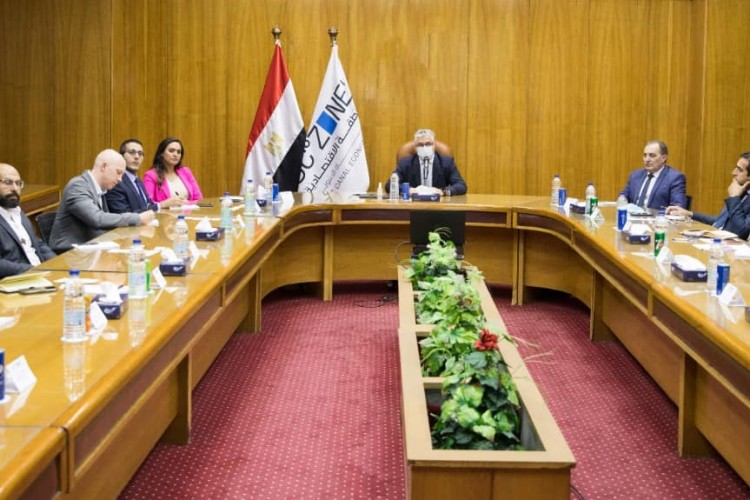 Suez Canal Economic Zone’s (SCZONE) Chairman Waleid Gamal El-Dein met with a delegation from the Egyptian-Danish Business Council, which is made up of a number of Danish companies, in an effort to enhance cooperation between the SCZONE and the international business community.

This comes as SCZONE has received the attention of many investors in various industrial sectors as a result of its readiness, which made it a distinguished industrial and maritime center on the map of the global economy.
Gamal El-Dein expressed his happiness with this meeting, which confirms promising economic cooperation between the two sides, especially that the economic zone has cooperation with the Danish company Maersk in the port of East Port Said, as well as the green fuel production project, explaining the extent of the economic zone’s readiness to achieve what this cooperation aspires to.

Gamal El-Dein also referred to the works that are being carried out in the West Qantara Industrial Zone, which is intended for agricultural and light industries, and the East Ismailia region, which is called the Technology Valley, as it is prepared for the industries of renewable energy, electrical analyzers, solar panels and other technological industries, in addition to the integrated areas that are included in the economic zone.

Meanwhile, Senior Commercial Adviser and Regional Director of the Energy Sector at the Danish Embassy in Cairo, Hanzada Farid, highlighted the importance of this meeting to discuss cooperation and investment opportunities available in the region. Farid expressed her interest in the memoranda of understanding (MoU) that were signed for the production of green fuels in the region, pointing out the importance of this step, especially with the approach of COP27, in which a number of Danish companies will participate.