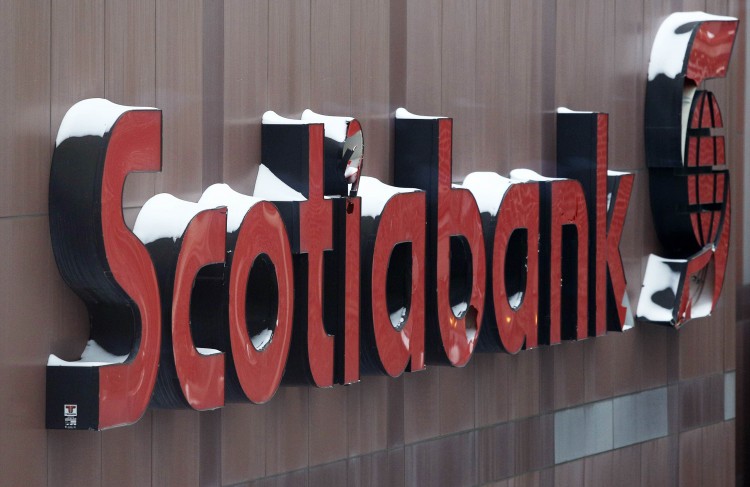 Canada’s biggest banks are on the hook for at least $478 million of the $26 billion owed to U.S. oil and gas firms that bought protection against plunging crude prices.

Bank of Montreal, Canadian Imperial Bank of Commerce and Bank of Nova Scotia are among lenders that provided price protection for U.S. shale drillers that bought insurance against declines in energy prices when North American crude oil was above $90 a barrel. The Toronto-based lenders, which have all said they’ve hedged their risk with offsetting trades, must make good on the protection sold to wildcatters now that oil is trading around $56 a barrel.

Those lenders, along with Royal Bank of Canada and Toronto-Dominion Bank, had derivatives liabilities to U.S. energy companies including Energen Corp. and Pioneer Natural Resources Co. at the end of 2014, energy company records show. The amount owed is probably much higher than the $478 million reported in filings, as not all energy companies, including Canadian firms, disclose their hedging counterparties.

“If the banks haven’t hedged right, then they’re sitting on a pretty sizable liability,” Peter Routledge, a National Bank Financial analyst, said in an April 16 phone interview. “But because they’re so heavily regulated, the probability of that being the case is low.”

Canadian banks, the largest lenders in Alberta’s oil industry, aren’t alone in being on the wrong side of energy hedges. Insurance, in the form of derivatives contracts, was also sold by Wall Street banks that financed the biggest energy boom in U.S. history.

The U.S. banks, just like their Bay Street counterparts, passed on the risk to hedge funds, airlines, oil refiners and utilities. The fair value of hedges held by 57 U.S. companies in the Bloomberg Intelligence North America Explorers and Producers index rose to $26 billion as of Dec. 31, a fivefold increase from the end of September, according to data compiled by Bloomberg.

Financial institutions act as a go-between, selling oil derivatives to one company and buying from another while pocketing fees and profiting on the spread, according to Charles Peabody, an analyst at Portales Partners LLC in New York. The question is whether the banks were able to adequately offset their risk when the market took a nosedive, he said.

“We actively hedge and manage our exposures to fluctuations in commodity prices,” said Anthony DeMartino, Bank of Montreal’s managing director and head of commodity trading.

Scotiabank’s market exposure is low and risk from customer contracts is hedged through offsetting transactions such as exchange-traded contracts, said Mike Durland, group head and chief executive officer of global banking and markets. Tom Wallis, a CIBC spokesman, said the firm’s “practice is to hedge liabilities.”

Spokeswomen for Royal Bank and Toronto-Dominion declined to comment on derivatives hedging beyond the bank disclosures.

The heads of Canada’s banks, deemed the world’s soundest for seven straight years by the Geneva-based World Economic Forum, have assured investors in earnings calls and industry conferences that their exposure to the oil and gas industry is “manageable.” Those assurances have focused on loans to the industry and not exposure through derivatives and hedging.

“Their net exposure to the sector is most severe on the lending side as opposed to what I’d call the capital markets side,” Routledge said, adding that when banks deal in derivatives they invariably bet on higher volatility.

“They’re making money on a tolerable increase in volatility,” he said. “The phrase I’d use is ‘Goldilocks volatility,’ which is enough volatility that the banks make money and not enough that it blows up their balance sheets.”

Canadian bank executives said because of their own hedges, they won’t necessarily lose money after paying what’s owed to oil and gas firms.

Still, the hedges offer a glimpse of how volatile energy price risks were shifted from drillers and producers to the financial system. For example, Bank of Montreal, Canada’s fourth-largest lender by assets, owed $187.8 million on derivatives contracts to six energy companies as of Dec. 31, including Concho Resources Inc., Pioneer and Unit Corp., corporate records show. Some of Energen’s contracts guarantee the company a minimum price of $89 a barrel, about $33 above Monday’s price.

CIBC, the fifth-biggest Canadian bank, owed $144.9 million to Concho, Energen and Pioneer, records show. Scotiabank, the biggest lender to oil and gas companies among the country’s banks, was on the hook for $104 million to Antero Resources Corp., PDC Energy Inc. and Unit, filings show. Royal Bank owed $1 million on hedges with Pioneer, and Toronto-Dominion was on the wrong side of hedges worth $40 million to Antero and Pioneer.

Even without the banks’ own hedges, energy losses probably won’t be big enough to endanger the stability of Canada’s financial institutions. Bank of Montreal, with C$7.1 billion ($5.8 billion) of loans to the oil and gas industry as of Jan. 31, had net commodity liabilities of C$2.07 billion, not including cash assets from commodity trading or the value of raw materials, company filings show. Total bank assets were C$672.4 billion.

CIBC, with C$6.8 billion of loans to the oil and gas industry, had net commodities liability of C$1.35 billion, according to company filings. That’s more than triple the C$418 million at Oct. 31, and the highest for that category in more than three years, driven by oil’s decline. The bank’s total assets were C$445.2 billion.

Scotiabank helped oil and gas producers hedge their production at much higher prices 12 months ago than they’d receive in the market today, Durland said in an e-mailed statement. Scotiabank, with C$15.4 billion of loans to the oil and gas industry, doesn’t break out its commodities derivatives exposure.

“Our strategies allow us to act as a shock absorber for our customers through economic cycles,” Durland said. “Producers owe us more when prices rise and business is strong. When prices fall, as they have recently, the bank’s credit exposure to these customers is reduced and the bank may actually owe the customers.”