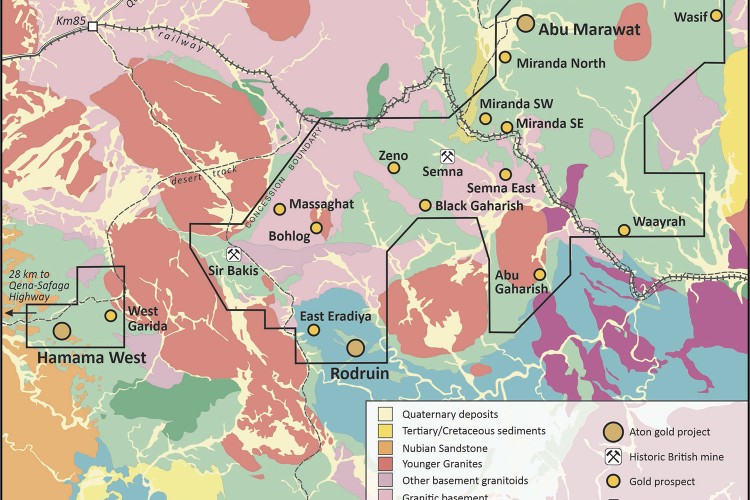 Aton Resources announced that it has achieved a new discovery at the West Garida prospect located in the Abu Marawat Concession in the Eastern Desert of Egypt.

The drilling program at the West Garida prospect involved five percussion RC holes testing the down dip extensions of mineralized quartz veins mapped at the surface.

The results showed that all five holes intersected mineralization associated with the targeted narrow quartz veins.

Commenting on the discovery, Tonno Vahk, Aton’s CEO, said “We are very excited to be able to announce the discovery of high-grade quartz vein associated mineralisation from this new drilling at West Garida.

“West Garida is an area that has interested us since we first mapped it in 2017, has been on our radar since then, and we are delighted with the results from this initial short RC programme. Its proximity to the Hamama West deposit makes it particularly interesting, in terms of its potential ease of development, and West Garida again confirms the outstanding exploration potential of the entire Abu Marawat Concession. We continue to push strongly ahead at both Rodruin and Hamama West, but these new results show the bigger potential of the Concession, which we fully intend to develop over time.”

“We anticipate further follow-up drilling to come at West Garida, as we look to shift our drilling focus to the numerous other high priority exploration targets at Abu Marawat, including Abu Gaharish, which appears to be a Sukari analogue, following the completion of the current diamond drilling programme at Rodruin. We continue to fully believe that very exciting times lie ahead for Aton,” Vahk added.