Sanctioning Iran: The Coming Oil Embargo & Its Effect on the Oil Market 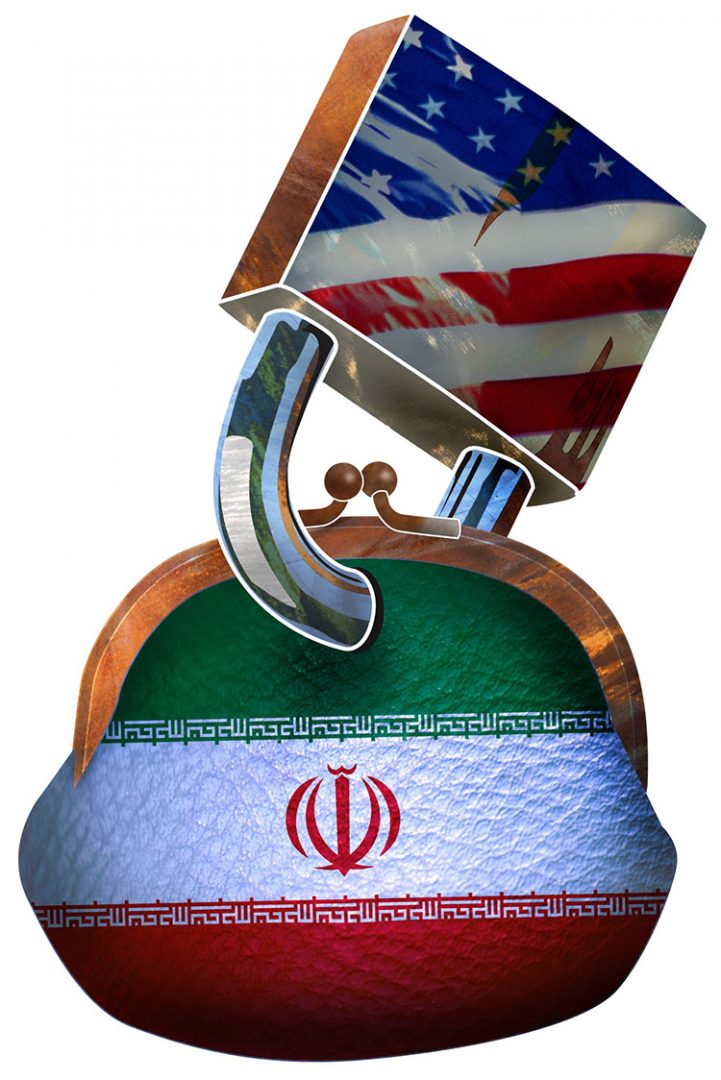 When, in July 2017, Total purchased a controlling stake in phase 11 of Iran’s South Pars natural gas field – projected to produce around 2 billion cubic feet per day (cf/d) – it seemed almost inconceivable that the French oil giant could pull out of the agreement just a year later. Following the conclusion of negotiations, Total’s chief executive, Patrick Pouyanne, lauded the deal as representing a “new page in the history of our partnership with [Iran]”. Fast-forward to July 2018 and it seems that this deal has already been placed in the shredder.

The effects of President Donald Trump’s dramatic rejection of the 2015 Joint Comprehensive Plan of Action (JCPOA) were felt almost immediately, as Total signaled their intention to exit the South Pars project should they fail to acquire a sanctions waiver from the US. Two months later, in July 2018, Middle East Economic Digest reported what most observers had long anticipated: that Total would indeed be pulling out of SP11 having been unable to obtain a sanctions exemption.

Total’s departure from the project is both a blow to Iran’s natural gas sector and to the Islamic Republic’s attempts to downplay the potential effects of the upcoming sanctions. It also represents a microcosm of a wider, ongoing process that could  have far-reaching implications for the global oil markets. As the US and its regional allies ramp up economic pressure on Tehran, Egypt Oil & Gas examines how the restoration of economic sanctions will affect the international oil markets.

On May 8, US President Donald Trump delivered a confrontational statement from the White House, in which he announced the withdrawal of the US from the JCPOA – the hard-fought nuclear accord between the P5+1 and Iran – and the reimposition of Obama-era sanctions. Following the announcement, oil futures shot up more than 3% to reach a fresh four-year high of $77.20 per barrel.

Rather than immediately re-introduce the sanctions, the Treasury announced two wind-down periods of 90 and 180 days. During these grace periods, companies and countries with commercial ties to Iran are expected to prepare themselves for the restoration of the sanctions regime, and cease any activities that contravene US legislation.

Many of the toughest measures will not come into effect until after the 180-day wind-down period expires on November 4. These include sanctions on Iran’s shipping sector, the Iranian central bank and the country’s energy sector. After this date, any organization transacting with the National Iranian Oil Company (NIOC), Naftiran Intertrade Company (NICO), the National Iranian Tanker Company (NITC) and other state energy companies for petroleum, petroleum products or petrochemical products will risk punitive fines and being shut out of the US financial system.

The US government has made no secret about wanting to remove Iranian crude from the market completely, and at the end of June requested that all countries cease importing from Iran by November. An anonymous State Department official told Reuters that the US was unlikely to issue any waivers. This would mean that any country continuing to purchase Iranian crude past November 4 could be hit by punitive measures by the US. Oil futures responded by rising past the $70 mark for the first time since early May.

In the weeks since, several senior figures in the Trump Administration have rowed back on the initial hardline stance towards the issuance of waivers. Secretary of State Mike Pompeo said on July 10 that the US will consider sanctions exemptions for some countries on a case-by-case basis. The following week US Treasury Secretary Steven Mnuchin echoed Pompeo’s remarks. “We want people to reduce oil purchases to zero, but in certain cases if people cannot do that overnight, we’ll consider exceptions,” Mnuchin told reporters.

It is not yet clear under what terms Washington will be willing to issue waivers. An Iranian news agency reported that the US was considering granting a waiver to South Korea following a request in mid-July. Similarly, Japan is also in talks with Washington to receive a sanctions exemption – although it appears unlikely that Tokyo will receive a positive response.

The only waiver request that has so far been rejected by Washington was made by France. Minister of Finance Bruno Le Maire revealed to Le Figaro that the US Treasury had rejected their request to exempt French companies operating in Iran from secondary sanctions.

To Comply or Not to Comply?

How close it comes to achieving its ambitious goal of reducing Iranian crude exports to zero will hinge on the degree of pressure the US is willing to exert on Iran’s biggest buyers.

China, in the midst of an escalating a trade war with the US, is one of the countries most likely to outwardly disregard Washington’s attempts to enforce a global oil embargo on Iran – especially as the trade disputes between the two countries look to be entering the oil sector. US crude shipments to China are expected to total 9.58 million barrels in August, down from 12.32 million barrels in July, while an executive from Chinese refinery company Dongming Petrochemical Group said recently that the company would end all purchases of US crude.

India, the second largest buyer of Iranian crude after China, is yet to make any public statements about its position. The past few months have seen mixed data regarding India’s imports. The latest government data showed that Iran overtook Saudi Arabia between April and June to become the country’s second-biggest supplier. However, industry data revealed that Indian imports dropped by a notable 16% in June, down to just under 600,000 barrels per day (b/d).

Vinod Raghothamarao, director of consulting at IHS Markit, told Egypt Oil & Gas that both China and India are likely to keep importing Iranian crude. “China and India are both posting successive records for crude imports, with expanding downstream capacity coming online that is optimized to crude grades that are relatively heavy and sour, like much of Iran’s oil output,” he said.

“With Tehran prepared to offer better terms on cargoes, both of these major export markets could actually increase their lifting of Iranian oil.”

Russia, like China, is unlikely to march in lockstep with the US, and may act to reduce the effects of the sanctions on Iran’s economy. While Moscow does not import hydrocarbons from Iran, it may invest as much as $50 billion into the Iranian oil and gas sector, a senior Iranian official said recently during a visit to the Russian capital.

There has been contradictory news coming out of Turkey – the fourth biggest buyer of Iranian oil according to Bloomberg’s data. Industry analysts revealed in mid-July that the country’s biggest importer of Iranian crude was reducing its purchases, signaling that Ankara may in fact be ready to cooperate with Washington on the matter. However, in a rebuke to US policy, Foreign Minister Mevlut Cavusoglu said at a press conference on July 24 that the Turkish government had told US officials that they will not be implementing the sanctions. “We will not bow down to such pressures, sanctions or threats,” the minister said.

The EU finds itself in a more difficult position than it did in 2012 when it agreed to embargo Iranian crude. Now, it is faced with a balancing act of sorts; anxious to hold the nuclear accord together but reluctant to explicitly act against US policy and jeopardize the transatlantic relationship.

On June 6, the bloc adopted an updated form of the Blocking Statute, legislation that prohibits European organizations from complying with extraterritorial sanctions regimes imposed by other countries. This means that European companies may face penalties in their own countries should they comply with the Iran sanctions. This will, in effect, create a situation in which companies are forced to choose between breaching the US sanctions regime or ignoring the EU Blocking Statute. Given the comparative severity of fines handed out by the US, as well as the threat of being shut out of their financial system, it seems that the Blocking Statute will act as little more than a symbolic gesture to the JCPOA.

Although these rules will not come into force until the beginning of August, a number of major European companies have evidently already decided that continuing business in Iran is not in their interest. Industry sources told Reuters that, in addition to Total, Spain’s Repsol and Cepsa, Italian companies Eni and Saras, and Greece’s Hellenic Petroleum will end purchases of Iranian oil before the November deadline. Whether the EU agrees to the embargo or not, it seems that Europe is destined to decline as one of Iran’s chief export markets.

As yet, the threat of incoming sanctions does not seem to have affected Iranian oil production or exports. OPEC figures show that production fell only very slightly from 3.822 million b/d to 3.799 million b/d between May and June, while exports of petroleum and condensate rose from 2.6 million b/d to 2.7 million b/d in May – the highest level since the signing of the JCPOA.

However, looking beyond November 4, there are differing views regarding how successful the sanctions will be in reducing Iran’s exports.

Iman Nasseri, managing director of FGE’s Middle East unit, told us that US ambitions for zero exports “will not be achieved whatsoever”.

“The market will hardly cope with it and there will be intentional misfollow [sic] of the US sanctions as well as some waivers from the US government to a few companies”, she said.

FGE is instead forecasting Iran’s total oil exports (including petroleum, products and condensate) to fall by around 2 million b/d to under 1 million b/d in 2019. According to their latest estimations, Iran will continue to export 700,000 b/d of crude to China, India and Turkey, 150,000 b/d of petroleum products, and 100,000 b/d of condensates.

In this scenario, FGE Chairman Fereidun Fesharaki has predicted that the prices will hit $100 per barrel in 2019, not helped by falling production in Venezuela, a deteriorating situation in Libya, and the limited spare capacity of oil producers to cover this shortfall.

IHS’s projections are comparatively conservative. “We believe that up to 250,000 b/d could be removed in the first six months after the imposition of sanctions, and growing compliance with increasingly strict US sanctions could take a total 500,000 b/d off the market over the course of a year,” Raghothamarao tells us.

How the sanctions affect the oil markets will of course depend on how much Iranian crude, condensate and petroleum products the US succeeds in removing from the market. Although the White House has said that it will attempt to set up a total embargo on Iran’s oil sector, this is highly unlikely to occur in the short or the medium term.

Washington’s traditional allies in Europe, Japan and South Korea are the countries most likely to fully cooperate with US policy. However, these countries account for only around 1 million b/d of Iran’s exports – less than half of the 2.7 million b/d Iran exported in May.

Complicating the picture further is Washington’s fractious relationship with Beijing, which given the current tensions, is unlikely to make significant cuts to its imports of Iranian oil. This raises the prospect of the US threatening China with sanctions come November 5, an act that surely will only strengthen Chinese resolve to maintain its trading relationship with Iran.

Without Tehran’s biggest customer on side, the US will almost certainly have to dial back its ambitions and perhaps rely on acquiring India’s full cooperation in order to exert maximum pressure on the Iranian government.

Despite the contradictory information currently being reported in the press, the picture will become clearer over the coming months as the US clarifies its position on waivers and new trade data becomes available. Until then we will all need to play the waiting game.