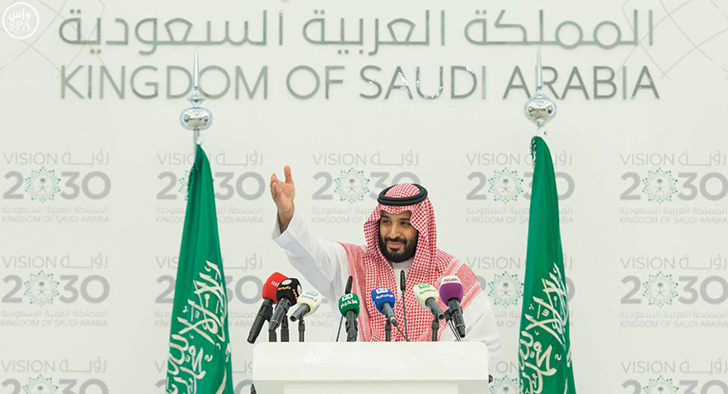 The Kingdom of Saudi Arabia (KSA) has greatly changed its views of the oil and gas industry over the past decade. The waythe Saudi dynasty perceives the importance of its oil wealth affects the oil and gas law and the kingdom’s economy.

Over the years, economic and political internal and external variations have triggered different reforms. In the middle of low crude prices, Riyadh, as every country in the Organization of the Petroleum Exporting Countries (OPEC) has been developing a new strategy to keep its economy stable.

Accordingly, Saudi Prince, Mohammad Bin Salman Al Saud,the Second Deputy Prime Minister and Minister of Defense,who was given control over the Arabian American Oil Company (Aramco) by a royal decree, has supported this particular strategy regarding the country’s main industry. This comes as the kingdom attempts to free its economy from oil and gas.

With the decrease in petroleum prices due to the excessive oil and gas production across the globe, OPEC decided to reduce the oil output. This has been an impetus to develop an alternative strategy for the leading sector of the kingdom with a desire to shift to a non-oil future, seeking alternative sources of energy.

In line with Prince Mohammad Bin Salman Al Saud’s support to a future kingdom that is not depending on the oil and gas industry, he has promoted the Vision 2030 that plans to turn Saudi Arabia to non-oil based economy.

The Vision 2030 proposes transferring KSA’s economy into non-oil based one. The Saudi Prince described the vision as a collection of economic and social regulations that aim to free the kingdom from dependence on oil exports, Reuters wrote in the article Analyst View: Saudi Arabia’s Vision 2030 Reform Plan. Vision 2030 also has a part relating to renewable energy as it targets the production of “9.5 GW of renewable energy.”

One of the programs of the Vision 2030 is the National Transformation Program (NTP).

In order to achieve the Vision 2030, KSA launched the National Transformation Program (NTP) which is a “methodology and roadmap for economic and developmental action in the Kingdom of Saudi Arabia” in order to give KSA a “leading position in all fields” and not just in the oil and gas related fields, according to the Saudi government’s document National Transformation Program (NTP) 2020.

Thus, the Council of Economic and Development Affairs formed an “effective and integrated governance model” in order to transfer the Vision to “implementation programs” that aim to “accomplish its goals and directions” through applying the NTP program, the document further states.

NTP translates the “Vision’s commitment” according to the government’s document through a number of objectives. These objectives include: a)”identifying the strategic objectives and targets of participating entities;”b) “translating strategic objectives into initiatives for the participating entities;” and c) “promoting joint action toward the achievement of common national goals.” In these articles NTP is identifying “national priorities” in the vision and their “public benefits.” NTP, thus, specifies advantageous and disadvantageous objects that affect reaching the visions’ goals.

The NTP program is divided into five phases; phase I is regarding “Identifying the Challenges” while phase II is related to “Developing Initiatives.” Then, phase III of the program will be addressing the development and “implementation plans for the initiatives”. Phase IV will deal with the ways of “promoting transparency in the publication of Targets and Outcomes.” Phase V of the NTP program will be handling “Auditing, Continually Improving, Launching New Initiatives, and Adding New Participating Entities,” according to book National Transformation Program (NTP) 2020. Thus, the program will be moving from the level of recognition to application and evaluation.

This new perception brings the question of how did Riyadh come to seek a non-oil future?

As Riyadh’s perceptions of the oil and gas industry have been changing throughout the history, the country has approached a milestone, in which a new strategy is set to pave the way for a non-oil scenario.

Saudi Arabia was not paying this attention to its natural oil and gas treasure when the kingdom was first established. Once, the Saudi Arabian Kingdom had its first King, Abd al Aziz ibnAbdarRahman Al Saud, his majesty “granted the first oil concession in 1923 to the British group called the Eastern and General Syndicate,” according to Helen Chapin Metz’s research.

With the discovery of oil in the gulf area, investing groups were formed seeking to have concessions in the region.  By time, the Arabian American Oil Company (Aramco) was investing in Saudi Arabia and the Saudi Arabian Royalty started to appreciate its black gold.

Saudi Arabia’s interest in oil and gas increased with time until “the Saudi Arabian Legislative Process including the drafting and enactment of concessions is approved or amended by Royal Decrees after first being reviewed by the Kingdom’s Council of Ministries and the Shura Council,” as mentioned in Dr. Abdullah F. Ansary’s book A Brief Overview of Saudi Arabian Legal System that was published in 2015 as the Royal Family keeps explorations and discoveries under surveillance.

Furthermore, as oil revenues represent huge part of the kingdom’s economy, article no.15 of the Saudi Arabian Basic Law of Governance states: “No concession is to be granted and no public resources of the country are to be exploited except pursuant to a law.” This article of the Saudi law shows that the kingdom is likely aware of its petroleum wealth and working to preserve it.

By and by the royal family started to adapt new schemes. Accordingly, Deputy Crown Prince, Mohammed Bin Salman, began supporting private sector. The Saudi Arabian government contributed in deciding projects suitable for Public – Private Partnerships (PPP). Norton Rose Fulbright Law Firm published in the article PPPs in Saudi Arabia Bright Opportunities or Challenges Aheadthat joint projects “between the public domain and the private sector in the energy and infrastructure fields are not new to Saudi Arabia.” However, the kingdom has announced that “it will look to public private partnership (PPP) as a means to satisfy its immediate energy and infrastructure requirements,” according to Norton Rose Fulbright’s article PPPs in Saudi Arabia – bright opportunities or challenges ahead?

PPPs enable the Saudi Arabian government to “access to private sector finance while maintaining control of project cost, quality and standards.” However, the Saudi government needs to update its policies to further make the best use of PPPs. Norton Rose Fulbright Law Firm’s article confirmed that as it stated that in order to have a PPP project, the kingdom needs to review the “legislative and regulatory framework as well as”the creditworthiness of the procuring authority.”

PPPs originally aim for defining a certain “timeframe.” Assistant Director General Saudi e-Government Program (Yesser), Ahmad Alkhairy’s book Public Private Partnership Model in Saudi Arabia published in 2012 stated that PPPs would help the Saudi government to “achieve the best outcome of PPP, which is driven by increased need of efficiency and quality of E-Government services delivered,” and to “save” costs and provide an “access to advanced technologies and resources.” It further aim for reducing “risks.”PPPs procurement is also meant to enable the Saudi Arabian government to face challenges like “globalization, consumer expectations, limited resources, limited skills, and technology innovations,” according to the book.

Alkhairy further added that applying the “E-Government” system along with adapting the PPP system will lead to “government innovation.”

The Saudi Arabian government should ensure the existence of strong “national communication,” according to AlKhairy’s book Public Private Partnership Model in Saudi Arabia, in order to confirm that “local authority officials are aware of the potential benefits of PPP and of the main issues involved in implementing them.” To have PPPs in the Kingdom, especially in the energy sectors, ensures that public companies will support the government and receive aid from the government as well through having access to several things that will improve the industry.

In addition to seeking to replace oil and gas as a source of wealth, Saudi Dynasty wants to transfer the main sources of power to non-oil sources. Saudi Arabia is “the world’s sixth-largest consumer of oil,” according to Jeffrey Ball’s article Why the Saudis Are Going Solar.

Ball explained that the Royal family is “concern[ed] about global warming” and thus they are keen to see “the end of the fossil-fuel era.”Prince Turki bin Saud bin Mohammad Al Saud was quoted in Ball’s article saying: “We have a clear interest in solar energy. And it will soon be expanding exponentially in the kingdom.”

The kingdom is eager to depend on new renewable energy to cover Saudi Arabian’s power demands. Dr. Moritz Borgmann mentioned in his article Saudi Arabia’s Amazing New Renewables Target: 9.5GW by 2023 that “Deputy Crown Prince Mohammed bin Salman, announced the first cornerstones on April 25, 2016 for the deployment of renewable energy in the country.”

Therefore, if Saudi Arabia adapted Vision 2030, it will flourish its economy and free it from being contingent on oil and gas.The Saudi Arabian Royal family seeks to have the kingdom in a leading position in generating new and renewable energy as it is now in producing petroleum and natural gas. Not only Saudi Arabia, but in the middle of oil prices decrease, many oil producing countries are expected to seek other energy sources and to have a replacement for oil and gas in its economy.