Overview of the Mediterranean Reserves 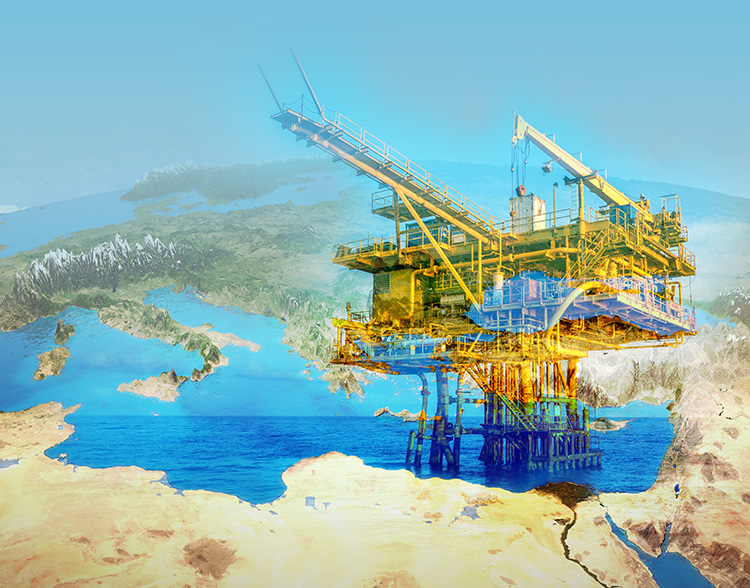 In the recent years, the Mediterranean region has witnessed important hydrocarbon discoveries beneath its waters. These discoveries, in addition to the already existing reserves, are valuable assets for the region’s economy and unlock significant prospects between the Mediterranean countries in terms of energy cooperation.

Egypt has more than 40 producing natural gas wells off the Mediterranean producing 0,781 trillion cubic feet (tcf) of natural gas and 7,606 million barrels of condensates. The recently discovered Zohr field is, so far, the largest gas field in the Mediterranean, with reserves estimated at 30 tcf. The giant gas field is expected to increase Egypt’s natural gas output by 50% in 2018 and 100% in 2020, according to the Egyptian Ministry of Petroleum. In December 2017, the field started output with daily production of 350 million cubic feet (mcf). This daily output is expected to increase to between 1.8 bcf/d and 2 bcf/d by the end of 2018, and then raise to 2.9 bcf/d by mid-2019.

In February, another gas field, Atoll, off the Egyptian Mediterranean shore started production. Atoll is located in the North Damietta concession in the East Nile Delta. Phase one of the project is now producing 350 mcf/d and 10,000 barrels per day (b/d) of condensate. Gas production from the field is directed to Egypt’s national grid. The main reservoir in the field possesses an estimated 1.5 tcf of gas and 31 million barrels of condensates.

The West Nile Delta is also a promising area in regards to Egypt’s offshore reserves. The operators of the fields, British Petroleum and DEA, expect to develop 5 tcf of gas and 55 million barrels of condensate reserves from phase one of the project. The existing undeveloped fields and future exploration activities are expected to further boost the production of the project by an additional 5 tcf to 7 tcf.

Noroos gas field, off the Egyptian Mediterranean shores, is another record-breaking field. It produces 32 million cubic meters per day (mcm/d), as per Eni’s recent announcement in March 2018. Eni described this production level as “the highest ever recorded by an Eni field in Egypt in the last 50 years”. The Italian company further added that production from Norros will increase to 34 mcm/d by June 2018 after drilling additional 14 wells.

With 48.4 billion barrels of proven reserves, Libya has the largest oil reserves in Africa and the tenth largest globally, based on the European Union’s statistics. It has the fifth largest natural gas reserves in Africa estimated with 53.00 tcf, according to Knoema. Its oil and gas production witnessed fluctuation since the 2011 revolution and the overthrow of the head of the state, Muammar Gaddafi. As per Energy Information Administration, Libya was producing about 1.65 million barrels per day (mb/d) of crude oil and 594 bcf of natural gas in 2011. However, the most recent statistics from Konema shows that Libya produced around 974,000 b/d during Q3 2017, and 592 bcf in 2015.

As for its Mediterranean reserves, Libya’s Bouri field, discovered in 1975, is believed to be the largest oil field in production in the Mediterranean. It has 4.5 billion barrels of proven crude oil reserves and 3.5 tcf of natural gas. Al Jurf is another main field in the Libyan Mediterranean territory. It consists of the BD-1 wellhead platform with 10 production wells connected to a floating production storage offloading (FPSO) vessel. Al Jurf’s production is expected to reach 40,000 b/d.

Algeria has 48 billion barrels of oil reserves and 53 tcf of natural gas reserves. Its oil production reached 994,000 b/d in 2017, while the most updated data about its natural gas production was 91.3 bcm/d during 2016. Most of the Algerian reserves are onshore; however, recent seismic scans have revealed potential oil reserves off the eastern coast of the city of Bejaia and the western port of Oran, as Investopedia wrote. The African country had planned to drill its first offshore well by the end of 2015; however, no explorations were announced. It currently discusses with ExxonMobil and other companies to start offshore drilling.

International Oil Companies (IOCs) have recently started to give Cyprus special attention, as there are two main recent gas discoveries in the Cypriot Mediterranean territory. In December 2011, Noble Energy announced the discovery of the Aphrodite field, with reserves estimated at around 4.5 tcf and production capacity expected to reach 800 mcf/d, according to Delek Drilling Website.

In February 2018, Eni announced the discovery of the Calypso gas field in Block 6 of the Cypriot exclusive economic zone (EZZ), 80 kilometers away from Egypt’s Zohr. Although the Italian company did not announce officially the capacity of Calypso, Eni described the field as a “Zohr-like” one, with the same geographic characteristics. Calypso holds 170-230 bcm of natural gas, Nasdaq wrote reporting from the Israel-based website Globes. Since 2013, Eni has licenses to explore hydrocodone reserves in Blocks 2, 3, 6, 8, 9, and 11 of Cyprus’ economic zones, which means that there is a potential to see more hydrocarbon discoveries off the Cypriot Mediterranean shores.

Israel’s proven reserves are around 12,730 thousands barrels of oil and 6,216 bcf of natural gas according to Oil & Gas Journal’s statistics of January 2018. Israel’s first offshore exploration well was drilled in 1970 with focus on shallow-water exploration until 1990s, further expanding to its entire EEZ.

As of 2016, 60 exploration and production wells were drilled in the Levant Basin offshore Israel, according to the Israeli Ministry of Energy. Noa well was the first gas discovery off the Israeli shores (1999) with reserves of 1.3 bcm. In 2000, Meri-B well was discovered with also 1.3 bcm of gas reserves, Reuters wrote. In the following years, many other natural gas fields were discovered off the Israeli Mediterranean shores including Leviathan, Tamar, Karish, Tanian, Dolphin, and Dalit.

Leviathan field is the largest gas field off the Israeli Mediterranean shores with estimated reserves of 18 tcf of natural gas and 600 million barrels of oil beneath the gas layer, according to Offshore Energy Website. The field was discovered in 2010 and its development plan was approved by the Israeli government in 2016, indicating that the gas of the Leviathan will be available in the market in 2019, as writers reported. Israel plans to drill four production wells in Leviathan field, which will produce 12 bcf of gas annually, double of the volume of gas available to the Israeli market.

Tamar natural gas filed is Israel’s only commercial natural gas field. It provides the majority of Israel’s power generation, in addition to exporting to Jordan. It was discovered in January 2009, began production in April 2013, and reached its full production capacity in July 2013. It produced about 4.9 bcm of gas in the first half of 2017, Reuters reported. Its reserves’ estimate was 5 tcf, further increasing to 6.3 tcf after the drilling of the second appraisal well Tamar-2. By 2013, Tamar’s reserves estimated reserves increased to 10 tcf, according to Offchore Technology.

Karish and Tanian natural gas fields are located next to Tamar field. Energean Israel, which owns 100% of both field, wrote in its website that the reserves of the two fields combined are around 2.4 tcf of natural gas and 33 million barrels of light hydrocarbon liquids; however, several news outlets reported that Energean Israel’s plan for the fields indicates that the reserves are 2.7 tcf of natural gas and 41 million barrels of oil equivalent of light hydrocarbon liquids. Karish is planned to produce 400 mcf/d out of the three wells that Energean Israel plans to drill in the field.

Lebanon’s offshore reserves are estimated to be between 440 and 675 million barrels of crude and between 96 tcf of natural gas reserves, potentially worth a combined $300bn-$600 billion, according to Financial Times. Until today, it does not have offshore oil and gas fields off the Mediterranean; however, it is worth mentioning that it signed its first offshore oil and gas exploration and production agreements on February 9, 2018. The agreement was signed by the Lebanese government on one hand, and a consortium of France’s Total, Italy’s Eni, and Russia’s Novatek on the other hand to start exploration in blocks 4 and 9 of the Lebanese Mediterranean waters. The first exploratory well will be drilled in block 4 in 2019, while the time frame of operations in bock 9 is still not announced. Lebanon is currently offering three more blocks of its water territory for exploration tender.

Malta has long history of trying to explore hydrocarbon reserves off its shores; 30 wells were drilled in the past 60 years without any discoveries. Nonetheless, the Maltese government has offered blocks 1, 2, and 3 of Area 3, which is located 6,000 square km north of the island in September 2017, for exploration and production license, as Times of Malta reported.

Syria’s reserves are estimated to be 2,500,000 thousand barrels of crude and 8,500 bcf of natural gas. Two hundred and thirty bcm of these natural gas reserves are offshore, besides 170 bcm of additional potential reserves, according to USGS estimates. There is no near future plans to extract these reserves due to the current civil war in Syria that has been going on since 2011. In December 2013, Russia signed a deal with the Syrian government to explore the reserves in the Syrian EEZ; yet, the former pulled out from the deal because of the war.

Gaza has two natural gas fields discovered in 2000. The main field, called Gaza Marine, is located 36 km west of Gaza City, while the second smaller one straddles the international boundary separating Gaza’s territorial waters from Israel’s territorial waters. The studies of British Gas Group (BG Group), which discovered the fields, expect the two fields to have 1 tcf of natural gas, while the study of Consolidated Contractors Limited, which is responsible for the development of the fields along with BG Group and the Palestine Investment Fund, estimate the wells to have 1.4 tcf of natural gas.