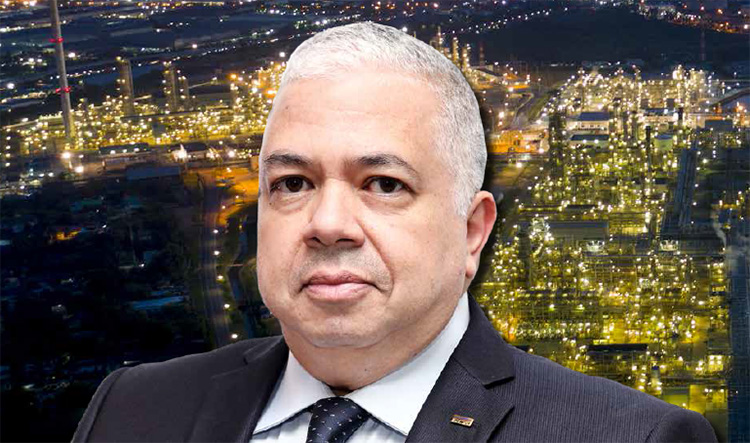 Schlumberger has established a solid path of technical innovation and successful operations in Egypt. With more than 100,000 people operating in more than 85 countries, the company has Egypt’s main projects included in its portfolio and is a key player to help the country achieve its plans of becoming a regional energy hub. Schlumberger’s most recent projects in Egypt include a memorandum of understanding with the Egyptian Ministry of Petroleum and Mineral Resources to establish the oil and gas sector’s data bank, in addition to a 3D seismic data survey on the Gulf of Suez.

Egypt Oil & Gas had the opportunity to discuss the company’s investments and operations in Egypt with Hussein Fouad El-Ghazzawy, former Vice President and Managing Director at Schlumberger Egypt, who has recently decided to go for early retirement after 34 years of outstanding contribution to Schlumberger and to his country.

In the first half of 2018, Schlumberger has signed new agreements with the Egyptian Ministry of Petroleum and national oil companies (NOCs). Could you comment on the terms of these agreements and how they impact the Egyptian oil and gas sector?

We have signed two memoranda of understanding (MoUs) in February, on the sidelines of the Egypt Petroleum Show (EGYPS 2018). The MoU with the Ministry of Petroleum is for the establishment of a data bank. Egypt has realized the importance of having a national data bank, and there will be a consortium of various companies to work with the ministry on it. It will allow us to advertise and facilitate operations in all the new concessions in the Mediterranean, the Gulf of Suez, the Western Desert, and, in the future, the Red Sea as well. I think it is a very crucial project; it is a project concerning national security, and we are definitely excited to have the national data bank in Egypt.

The other agreement is a contract we signed with EGPC for 15 years of 3D seismic data on the Gulf of Suez. We have been drilling and exploring the Gulf of Suez for the last 60 years, but the era of easy oil is over, so we need to use the technology available, especially the 3D seismic technology, to improve the potential of exploration operations in the area.

I would also like to mention other projects that Schlumberger has recently joined, as the agreement signed with both the ministry and Ganope in July 2017 concerning the Red Sea multi-client survey. This agreement is set for the next 15 years for 2D and 3D seismic data in the Red Sea. This would not have been possible without Egypt signing the maritime border agreement with Saudi Arabia, which now allows us to explore in our own economic zone. We will invest $750 million over the course of the 15 years. We have three main international oil companies (IOCs) already signed. The multi-client agreement works simply: we invest and we acquire the data, then sell this data to investors interested in the data or in the area; which means that the three major IOCs to sign the pre-commitment agreement are interested in the data.

We initially started to acquire 2D data in mid-December 2017 and finished on March 26 this year. The data is currently being processed in preparation for the Red Sea bidding round, roughly scheduled for October this year. With these companies paying us in pre-commitment agreements, some of the money has already been invested back into Ganope. It is a win-win situation; we get some return on what we invested, and the government – which is Ganoupe in this case – also gets some money. We are very excited for the Red Sea, once the bidding round is complete, we will start acquiring 3D data. Looking at the number of wells already drilled in the Red Sea, exploration in the area has good prospects for Egypt.

The company has recently invested $60 million in Egypt. How has that been spread across your operations in the country?

That $60 million is separate from the agreements I have mentioned. It has been spent on building a state-of-the-art operational base, the second largest in the Middle East and Africa. It is built on an area of over 100,000 sq meters in the industrial area of 6th of October, with 35,000 sq meters of the area covered. It houses the latest equipment, allowing us to maintain and repair all our operational equipment in Egypt and the entire north Africa and Eastern Mediterranean regions.

This $60 million is an investment that has already taken place in Egypt, through buying the land and building the operational base. We have a training center there, for both training our people and for our customers and partners to train their people; on any given day, we have up to 600 people working there.

For us to make that investment, we had to first make a commitment, which we did in 2013 when the situation was difficult in Egypt. However, we have faith in the country, we trust Egypt´s potential, so we decided to invest, and in 2016, we made our second largest investment worldwide for the operational base here in Egypt. The base had a soft opening in November 2017 and an internal inauguration in February of this year.

We are very active in the Mediterranean. Our biggest achievement was in the end of 2017, in December. We are very proud of opening the early production facility in the Zohr natural gas field, which was designed and manufactured by us, working with Eni, EGAS, and Petrobel. This entire project was done with worldwide standard and the early production facility was done in a record time. The facility is meant to produce at least 300 million standard cubic feet (mcf), being able to go up to 400 mcf. In this project, we also applied a new technology that takes sulfur out of the natural gas in the most environment-friendly way. This technology had never been used in Egypt before.

Besides that, we also have our continuous work with BP in the Mediterranean through integrated projects as Atoll, Giza, and Fayoum, meeting all the records in terms of drilling. It is a team work and we are very proud to be part of that.

Furthermore, we are very active in the Western Desert, and one of our technologies has helped Khalda, which is Apache’s joint venture, to drill a well in the fastest drilling time ever recorded in the area. The recent discovery of Eni in the Western Desert and other projects makes us see it as an area that we would like to focus on, and we hope for more activities in there.

Is Schlumberger planning to join new projects in the near future?

Studies have been going on in the unconventional wells of Apollonia. We were involved in the project’s first steps and we look at continuing our involvement in the project. I believe the future of unconventional resources in Egypt is very bright, so we definitely have an interest in being part of it.

We would also like to be more involved in the Gulf of Suez. I think the area still holds a lot of potential, which is why we are excited about this 3D seismic agreement. In general, the reservoir recovery in Egypt is very important and the country must be more aggressive in pursuing new technologies and more enhanced oil recovery, because that will help us increase our production in the complex reservoirs of the Gulf and in its existing facilities. Extending my comments on that, I would like to mention that the fields in the Western Desert decline at a very high rate of 35% per year, which is very significant, so being more aggressive in oil recovery would also prevent the country from declining its oil production in different areas.

Considering your path in Schlumberger, what are your suggestions and comments on the future of the Egyptian oil and gas sector based on your experience?

I committed 34 years of my life to Schlumberger. I started very early when I was 22 years old. Since I joined the company, the oil and gas sector has definitely changed a lot, and, from my whole experience, I believe Egypt should invest in enhancing the competency of the people in the oil and gas sector. I have been around many places with a lot of Egyptians working in the sector. We are dominating the Middle East, we are very active in Africa, Asia, North America, and Europe – we have a lot of good Egyptian employees abroad. However, the industry needs to attract these people to work and contribute in their own countries instead of outside. Egypt does not lack manpower and talents, so Egyptian companies should take a more assertive role in pursuing exploration and production opportunities through our own human resources.