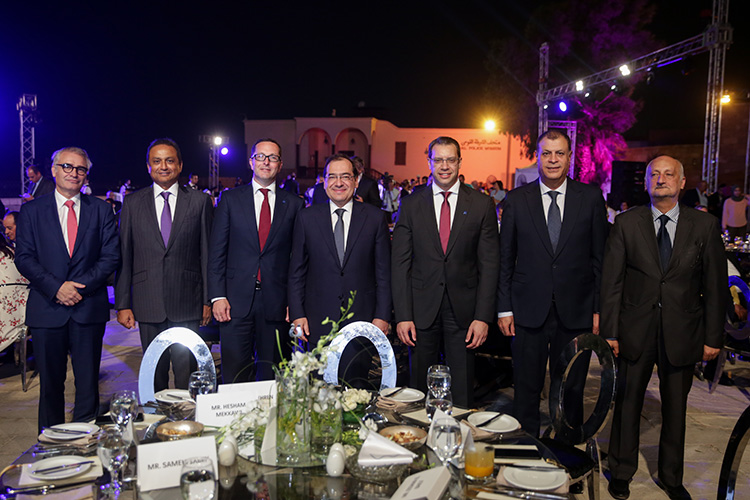 During his first visit to Egypt, Chairman of the Board and Chief Executive Officer (CEO) Mario Mehren reinforced Wintershall Dea’s commitment to the country. The company invited representatives from the oil and gas industry, German stakeholders and diplomats for a one-of-a-kind Gala Dinner at the monumental venue of the Citadel of Salah El Din in Cairo.

The event was held under the patronage of H.E Eng. Tarek El Molla and the Embassy of the Federal Republic of Germany.  The Minister, Wintershall Dea’s CEO and Senior Vice President and Managing Director Egypt Sameh Sabry gave the guests an insight into the newly formed company and the latest political developments in Egypt. The evening was rounded off by an entertainment program amid an awe-inspiring scenery.

Mario Mehren highlighted Wintershall Dea’s positive experiences in Egypt, saying that the country plays a vital role in the company’s portfolio. He further mentioned the current investment program that was announced earlier, as the company is spending 500 Million Euros in Egypt to double its production.  With regard to the prep up for the Raven field in West Nile Delta he said, “together with operator BP, we are working for the Raven field to come on stream. That will help us to boost our gas production. This shows you how we are set for growth in Egypt.”

Mehren highlighted, that he is pleased, having operational activities in Egypt. ””It is really a big pleasure to be a part of the Egyptian oil and gas industry and part of the community here,” he added.

Tarek El Molla expressed his gratitude for the formation of Wintershall Dea, saying “we are very enthusiastic about this merger and the plans it has for the Egyptian oil and gas sector, hoping that this strong alignment will bring Wintershall Dea to Egypt’s stock list of international oil companies (IOCs).”

Mario Mehren stressed the minister’s role along with the Ministry of Petroleum and Mineral Resources are playing in the creation of an East-Med gas hub and how the merger could contribute to this development. “This is a fantastic and visionary idea, both as a gas strategy and from a political strategy perspective.. I think this have all the ingredients to become one of the success stories in the future for Egypt but also for the cooperation between Egypt and the European Union, which we know will have a significant demand for gas. So Minister, I thank you for this visionary initiative.”

The CEO further elaborated on the future prospects, particularly in terms of gas production, which are very positive for Egypt and for the company alike saying, “we have seen very interesting discoveries in Egypt, but also in other areas of this region, and therefore, I am convinced that there is a very impressive resource base available. And that makes the East-Med a very interesting place for a future gas hub.” Moreover, he said that Egypt is very well placed because of its infrastructure that is already available and especially the liquified natural gas (LNG) facilities to ship gas to Europe.

The Egyptian Managing Director Sameh Sabry said, that Wintershall Dea’s journey in Egypt has come a very long way. The company went by different names throughout its 45 years of history in Egypt and is arguably one of the longest standing German investors in the country. Since then, the company have produced more than 650 million barrels of oil equivalent (boe), he explained.

Sameh Sabry also shared his thoughts on the ever-growing level of improvement in the business community, which shapes the Egyptian petroleum industry. “We have seen the solid steps taken to convert Egypt into a regional hub for the East-Med, which is not only unlocking opportunities in Egypt, but also unlocking opportunities in the region. We have seen the Modernization Project that his Excellency has been supporting, and this is in terms of improving the capabilities of the people as well as the investment climate that is very welcome.”

Pointing to the new company set-up of Wintershall Dea, Sabry stated: “Size matters. So this comes with additional resources and there is a clear plan for growth. On the other side, Egypt is offering a very wide landscape of opportunities and its improving business climate as well as well-established infrastructure, very good talents and human capabilities”.

Sonke Siemon, Charge d’ affaires of the German Embassy in Egypt said during his speech that the energy sector is pivotal for political stability. “Without affordable and reliable access to energy, there is no stability available. We need therefore reliable and constant energy supply for the population and for business, and I am very proud of Wintershall Dea’s contribution to this big endeavor, that Egypt has in front of it.”

Mario Mehren concluded in his speech that the company’s greatest achievements lie within the traditional engineering virtues and the willingness to break new grounds, which reflects the company’s motto “Minds of engineers, pioneers at heart.”

As the day was coming to an end, the minister said, “the Ministry of Petroleum and Mineral Resources is ready to support and help eliminate any obstacle to help realize Wintershall Dea huge goals in Egypt.”