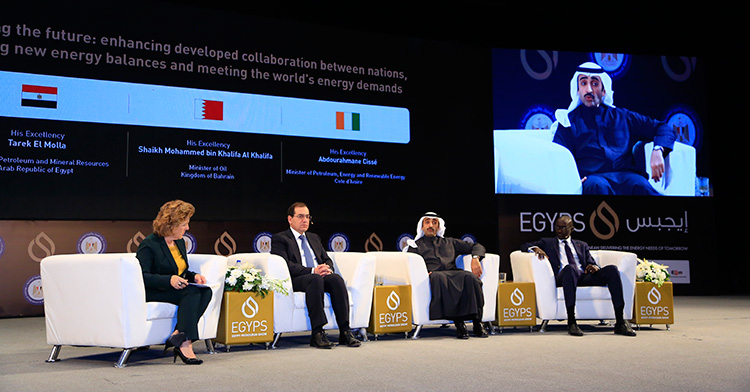 New discoveries, investments, downstream diversification and integration, data-driven operations and digital innovations were the backdrop of the Egypt Petroleum Show (EGYPS 2019) Strategic Conference, where industry leaders met to pave the way for a stronger, more resilient oil and gas sector. With plethora of enhanced global content and announcements, the conference hosted upstream, midstream and downstream global leadership sessions, CEO strategic roundtables, and an even more regional focus on the Mediterranean and North African energy sector.

On the opening session, the Egyptian Minister of Petroleum and Mineral Resources, Tarek El Molla, discussed alongside his Bahraini and Ivorian counterparts how the three countries are promoting energy efficiency and sustainability with the current global challenges.

El Molla pointed out to the stability the country is currently enjoying, which led to more projects that represent the New Egypt with developments across all sectors. “Egypt has more natural gas projects other than the mega field of Zohr, with production at the Atool field being ramped up and work in other fields also progressing. Particularly, as production in the second phase of the West Nile Delta fields started just a couple of days ago, with a production level of 400 million cubic feet per day (mcf/d) that will reach 700 mcf/d in April,” the minister said.

“Another element the ministry is focusing on is upgrading and expanding refineries, with the goal of achieving self-sufficiency of refined products this year,” he added.

El Molla also said that Egypt has ambitious plans for increasing production from the Western Desert, Red Sea and the Mediterranean. The minister pointed out to the overall changes the petroleum sector is witnessing, from a surge in investments to subsidies reform, which allows for fair pricing and more funds being directed to public services, such as health and education, and creating more job opportunities.

El Molla noted that there is now a clear vision by the government to achieve economic prosperity, and that efforts such as organizing EGYPS come in line with Egypt’s profile as a regional energy hub. “We are not talking the talk, but also walking the walk,” the minister concluded.

Pushing the Boundaries for Downstream Innovation

Leaders from global oil and gas companies discussed how to push the boundaries for downstream innovation, consolidation and diversification. How integrated businesses are offering new opportunities within the downstream industry was highlighted by strong and diverse portfolios, and how incorporating smart growth strategies is crucial for organic growth.

Another point tackled was the ways downstream oil and gas business can thrive in the middle of the ongoing shift towards decarbonization strategy. Experts discussed how they are constantly producing cleaner lubricants and fuels as they adjust to the consumers’ changing mindset.

Momar Nguer, President of Marketing and Services at Total, highlighted the company’s interest in producing cleaner fuels, like biofuel, with more African companies interested in contributing. Others reflected how the International Maritime Organization (IMO) and other low-Sulphur regulations enhance margins of complex refineries, enabling them to produce low-Sulphur petroleum products.

Countries are moving to low-carbon economies and there is continued discussion on how natural gas as a clean and affordable resource can be capitalized across the value chain. Many talked about going down the value chain and how downstream portfolios are being managed in a way that enhances the integration of trading businesses and refineries in order to boost value, as well as improving resilience and introducing new business opportunities.

A number of panelists from distinctive backgrounds also contributed to a well-rounded discussion on developments in the industry. Xiansheng Sun, Secretary General of the International Energy Forum (IEF), spoke affirmatively about the cooperation between Africa and China, pointing out that cooperation between the two parties follows the “historical routes to develop the industry” and is a “driving force of cooperation”.

Dr. Houda Ben Jannet Allal, General Director of the Observatoire Méditerranéen de l’Energie (OME), said that “Egypt is a big game changer in the region in terms of production”. These regional dynamics are set against the backdrop of an industrial shift towards a sustainable energy future.

Most African countries and all members of the Organization of Arab Petroleum Exporting Countries (OAPEC) have signed climate change agreements and are assessing ways forward based on these commitments. Allal also stressed that as nations develop and industries capitalize, the “energy demand will double and the electricity demand will triple”, meaning that for the future of energy, “cooperation is the name of the game”.

On international developments, Massimo Mantovani, Chief of Gas and LNG Marketing and Power Officer at Eni, spoke about the initiatives connecting pipelines from the Middle East and North Africa (MENA) and the Mediterranean region to the European Union (EU). Specifically, he expressed that Egypt is strategically placed for this type of advancement and these types of projects are going to benefit European markets.

Many positive comments were heard about Egypt’s Zohr, especially on how it has been a ‘game-changer’ in terms of perceptions around global markets and Egypt, Mantovani indicated, adding that Eni is happy to be in Egypt, where it feels there is a great potential for exporting capacity. He also stressed that capital investments in oil and gas are increasing internationally and this requires that supply and extraction projects go forward.

Meanwhile, Richard Tyrrell, Chief Development Officer and Board Member of Höegh LNG, said that Höegh LNG has had positive experiences working in Egypt, especially with joint venture companies, and also spoke about the LNG market and the importance of accurately placing the costs of these projects across the value chain.

CEO of Baker Hughes, a GE company (BHGE), Lorenzo Simonelli, affirmed that “Egypt is in a great position to be a regional hub, especially location-wise with its gas reserves.”

Energy Supplies and Energy Mix under the Spotlight

A Euro-Mediterranean cooperation era was embraced, unlocking the region’s energy potential as oil and natural gas discoveries are fast-tracked and international exports are ensured. “People talk about major gas discoveries in the area, but I think we have more gas to discover,” Mathios Rigas, CEO of Energean, noted, signifying a more flourishing gas future to tap into.

Egypt and Europe have significant gas relations. “Egypt has a number of options for increasing their gas production,” Grady Ables, Senior Region Vice President at Apache, noted, adding that it has great feasibility for significant gas export and that “Europe is the obvious market for that.”

Oil and gas experts also reflected on the existing competition in the market between countries seeking to become natural gas and LNG hubs. “I think as we talk about Egypt as an energy hub, having a deregulated big market at the back of this hub is quite a key success element,” Gasser Hanter, Chairman and Vice President of Shell Egypt, said.

EGYPS Strategic Conference was officially concluded with a closing panel with minister Tarek El Molla. In his closing remarks, the minister commented on the bridge between East and West and how foundations for a sustainable future energy mix can be built.

In addition to that, El Molla also mentioned the several memoranda of understanding (MoUs) signed on the sidelines of the Show.

“We have a very ambitious plan for growing our natural gas production. We reached self-sufficiency, we started to resume exports, and we plan to fully utilize our exports capacity,” he noted.

“We are also very keen on continuing our discoveries, and we will not do that unless we have concession agreements in place. To demonstrate that, we will focus on the Red Sea. The year of 2019 will be for the Red Sea,” the minister highlighted.

El Molla winded up the session stating that “[EGYPS] is a great opportunity and a milestone for the local companies to showcase their work, their milestones, and achievements.”