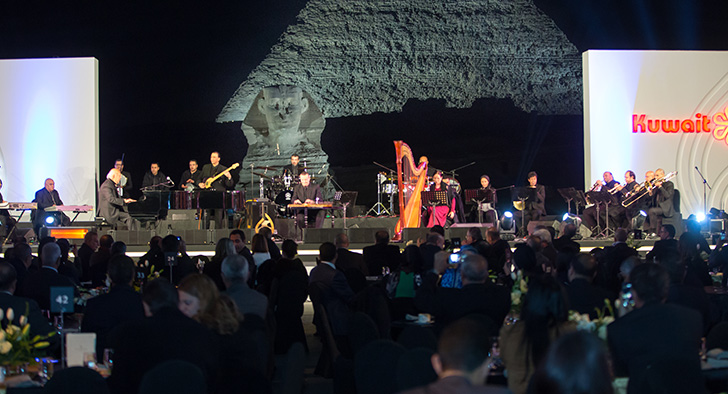 On February 14th, world’s energy industry leaders, political figures, and high profile invitees gathered for Egypt Petroleum Show’s (EGYPS 2017) grand Gala Dinner at the sound and light venue of the Pyramids in the metropolitan city of Giza. The night was an opportunity for potential business talks and more networking among invitees.

The event kicked off with a welcome speech from Christopher Hudson, President, Global Energy Division, dmg Events, expressing his pride over organizing the entire EGYPS 2017 event and his honor for bringing together top energy industry figures from all over the world.

Hosted by the eminent Kuwait Energy Company, the event showcased the company’s active engagement in Egypt on a huge scale on the backdrop of the historic Pyramids, followed by a speech by Kuwait Energy Chairman (KEC), Mansour Abu Khamaseen. His Excellency, Egyptian Minister of Oil and Mineral Resources, Tarek El Molla, welcomed the attendees in an optimistic speech that pledged a promising future for the oil and gas industry of the Arab Republic.

The prominent event presented a live singing performance during the Four Seasons Hotel-catered dinner. The famous Egyptian musician, Omar Khairat, gave a superb musical performance on his pianoforte, presenting his like-no-other works with his enchanting beats and rhythms.