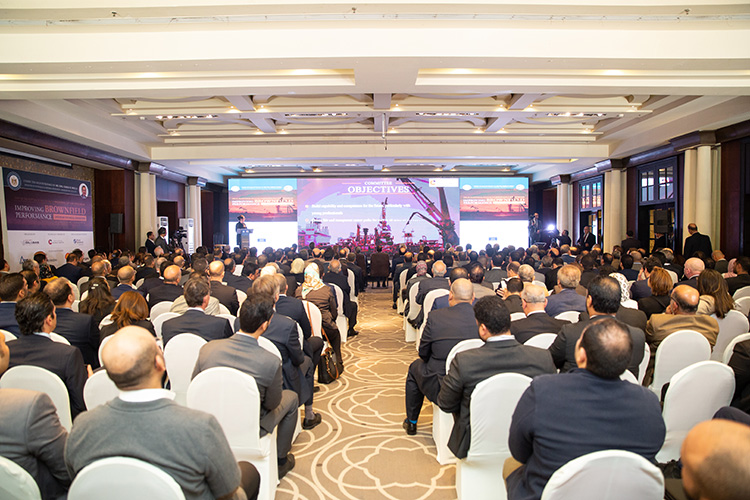 Egypt Oil & Gas (EOG) and the EOG Technical Committee held the Improving Brownfields Performance Upstream Technical Convention on December 8-10 at the Sky Executive Resort in Cairo. The convention took place under the patronage of H.E Eng. Tarek El Molla, the Minister of Petroleum and Mineral Resources.

The event, which takes place annually in line with the Egyptian oil and gas sector’s Modernization Project, brings together professionals from private and public entities to discuss enhancing performance and boosting oil and gas output.

The convention, which had four strategic panels and four technical workshops, started with a video introducing the EOG Technical Committee, its subcommittees, activities as well as committee members.

Expressing his satisfaction with the third technical convention, El Molla stated the significance of discussing brownfields as “the majority of Egypt’s fields are mature, and the ministry needs to work hard in order to maximize oil production.”

The minister mentioned the gap between oil supply and demand, which the ministry faces while importing refined products or crude oil for local refineries. “What we are really striving for is to close this gap of oil, not only to stop the decline, but also to increase the production,” El Molla noted.

The minister further addressed the importance of safety, shedding light on safety week which the ministry celebrated few days ahead of the convention. El Molla stated that a week earlier, the Ministry of Petroleum and Mineral Resources agreed with its partners to create a new reform committee that will have itself and its subsidiaries; the Egyptian General Petroleum Corporation (EGPC), the Egyptian Natural Gas Holding Company (EGAS), and Ganoub El Wadi Petroleum Holding Company (Ganope) on one side and the EOG Technical Committee on the other side.

El Molla expressed his hope to have a united oil and gas industry in Egypt, as national oil companies (NOCs), international oil companies (IOCs) and service companies work together for the success of the Egyptian oil and gas sector. The minister added that coming together with partners will help the ministry to improve performance and add value to the Egyptian economy. “Hence, with the creation of this committee, we agreed that by the end of Q1 2020 we will have to prioritize the work with the initiatives and with clear implementation plans,” he explained.

El Molla expressed his pleasure with the event’s Young Professionals Day, saying “the future belongs to the youth and to the young generations whom the oil and gas sector needs to give the opportunity to demonstrate and talk.”

Welcoming attendees and presenters, Mohamed Fouad, EOG’s Managing Director and the Technical Committee Co-Chairman, noted that the minister’s strategy “coupled with a robust action plan, has transformed the energy sector and will inevitably transform Egypt into a regional oil and gas hub.”

“The establishment of EOG Technical Committee has been throughout the years working so hard in line with the minister’s strategy to be able to provide all the support it can to achieve an ongoing sustainable sector,” he added.

Fouad expressed his insights into the three-day convention to boost competitiveness as well as business models, to develop health, safety and environment (HSE) culture and behavior, and to highlight brownfield technologies.

According to Fouad, “among the most exciting continuous developments of 2019 is the establishment of the East Mediterranean Gas Forum (EMGF). One of the main purposes of the forum is to accelerate the economic exploitation of existing natural gas reserves, benefit from existing infrastructure and encourage the private sector to facilitate exportation of future gas discoveries.” The EMGF establishment comes in line with the Modernization Project, which has its pillars “incorporated throughout the entire oil and gas sector, leading the way for other sectors to follow suit,” Fouad stated.

Fouad shared some of EOG’s Research and Analysis (R&A) achievements in 2019 stating that the R&A team launched its premium report, tackling the energy sector and offering in depth analysis. The R&A team, aligning with the ministry, further published a report about the petroleum sector in 2018 to be distributed in EGYPS 2019. Moreover, the team published a report on the EMGF overlooking the involved countries.

Thomas Maher, President and Chief Operating Officer (COO) of APEX Energy and the EOG Technical Committee Chairman, stated in his opening speech, on behalf of the EOG Committee, that the committee has been working hard over the past 11 months in order to develop a program for the convention and benefit its attendees. “This started back in February with the formation of a subcommittee to draft a white paper on improving brownfields performance. The paper was completed in July with a peer review process with the government’s partners to follow,” Maher noted.

In cooperation with the ministry’s technical office, the committee aimed through the convention’s program to “use the findings of the white paper to focus attention on developing Egypt’s brownfields, particularly the onshore oil fields,” Maher added. “Along with the white paper prepared to underpin the convention is the technical committee’s efforts to address the challenges,” Maher stated, promising to exert additional efforts in 2020’s convention.

Praising the technical workshops, Maher stated that this year’s convention program had the best submitted abstracts. Maher further expressed his excitement by “the quality of the operational excellence awards that would be given out [during the event],” adding that the committee received 18 submissions for the awards.

An Overview of the Energy Mix

Meehan stated that the importance of carbon intensity and the world’s concern about it is that it could cause dramatic effects if the world did not change its ways. “The need to decarbonize energy system is beyond dispute,” he noted.

Discussing CO2 emission levels in different countries around the globe, Meehan explained that although Egypt’s CO2 emissions are considered small compared to a country like China, the North African country’s CO2 emissions have been increasing over the past 20 years.

Meehan further discussed the growth income per capita as well as the annual energy use per capita. Despite the decreasing number of people without access to electricity, “there are [still] over a billion people around the world without access to electricity,” he stated, as the number of people who have access in Sub-Saharan Africa have not been decreasing. Hence, around three billion people have been depending on biomass.

Additionally, his speech discussed the increasing labor productivity in Egypt over years. Meehan further tracked the oil production for Egypt and Oman, highlighting opportunities to boost output. He noted that production in North America has been increasing thanks to shale oil, adding that he came to Egypt to share his experience in horizontal wells.

Meehan presented his expectations for the future, anticipating that digital oilfield and artificial intelligence will have a big role. Widespread instrumentation; stacked horizontal wells; as well as improvement in tools for sand control, cleanout, sidetracks, selective simulation and shutoff are also among the technologies that need to be leveraged more often. His thoughts further included having smaller, more nimble operators chasing the larger corporations for efficiency gains; as well as greater opportunities for service companies to bring advanced technologies for mature fields.

The Upstream Convention’s panels made it possible for industry leaders to review crucial topics in the oil and gas industry focusing on enhancing the competitiveness and business models, as well as promoting brownfields technologies.

Meanwhile, the technical workshops presented along the first and second days of the convention highlighted prominent updates on value creation from brownfields; applied technologies’ innovations; brownfields infrastructure management; and HSE culture and behavior.

Before kicking off the panels, Fouad and Maher presented to El Molla an appreciation award recognizing five achievements of the ministry in 2019. The achievements included increasing natural gas production and liquified natural gas (LNG) exports, the implementation and advancement of the Modernization Project, the establishment of the EMGF, two oil discoveries in mature fields in the Gulf of Suez, and a global recognition of the Egyptian oil and industry as a solid destination for foreign direct investments (FDI).