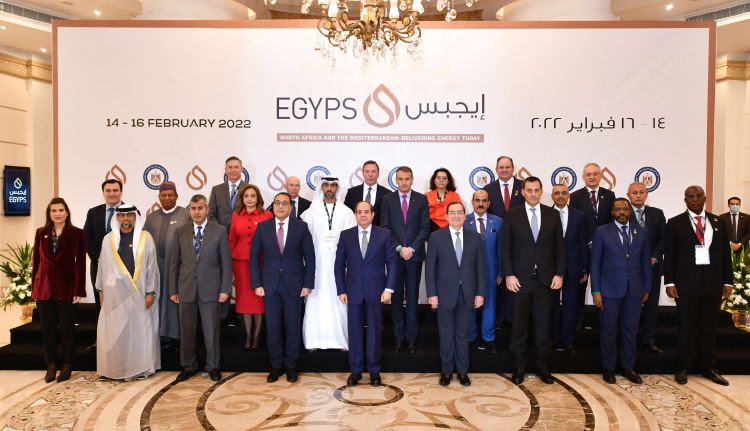 During his inauguration of the fifth edition of the Egypt Petroleum Show (EGYPS 2022), Egyptian President Abdel Fatah Al Sisi urged developed countries to provide economic support for Africa’s energy transition and to extend the transitional period for the achievement of its renewable energy objectives.

Al Sisi pointed out that Africa is running behind in its energy transition due to historical reasons. “The cost of fulfilling renewable energy commitments to address climate change is substantial. African countries [cannot afford such a cost].” He called for the decisions of the next UN Conference of Parties on Climate Change (COP27) not only to be reasonable and measurable but also to be fair.

EGYPS started on February 14th, taking place over three days at Egypt’s Al Manara International Exhibition Center, under the patronage of the Egyptian President. The fifth edition of the Show is held under the theme “North Africa and the Mediterranean: Delivering Energy Today”.

The Egyptian Minister of Petroleum and Mineral Resources Tarek El Molla highlighted the importance of cooperation between African countries to achieve their energy goals, stating that “the aspiration of our people must lead us all to join hands to realize their legitimate hopes for economic progress and development.”

In a keynote address by Fatih Birol, Executive Director of the International Energy Agency (IEA), Birol referred to the worldwide recognition of Egypt as an important energy player. He delivered what he described as “good news” saying that “in the light of the developments in Egypt, and following the Egyptian government request, I look forward to welcoming Egypt joining the International Energy Agency’s family as an associate member.”

He tackled how climate change affects Africa, pointing out that the whole continent produces “only 2% of the global emissions causing climate change.”

“Today in Sub-Saharan Africa, only a bit more than 40% of the people, not even half of the people have access to electricity,” Birol stated, explaining that over “900 million [people] in Africa use premature ways of cooking.” This leads to around 500,000 premature deaths annually, especially among women, due to the emissions produced through the use of premature fuels, such as coal, wood, and undeveloped biomass.

In his speech during the opening, El Molla praised the success of EGYPS’ previous editions, pointing out that EGYPS has made its mark as an important date on the international energy calendar. He also highlighted some of the milestones achieved by the oil and gas sector in the past years, referring to its contribution to the Haya Karima (‘Decent Life’) initiative to ensure sustainable development.

The panel tackled the topic of climate change and energy transition from an African perspective. During the panel, El Molla explained the huge contrast among the 54 African countries as some do not have the ability to effectively exploit their resources, while some lack the infrastructure required for energy transition. Therefore, the minister stressed the importance of unifying efforts with regards to the energy transition in order for Africa to have a voice at the upcoming UN Climate Change Conference 2022 (COP27).

Abou-Zeid noted that “17 countries in Africa produce natural gas. 70% of the African petroleum is exported and not benefited from in local transformative articles or energy generation. 45% of natural gas in the continent is exported.”

Lima agreed that there will be difficulties in pushing Africa to cut down on its use and production of petroleum and natural gas, pointing out that “Africa needs to have our own green plan, not the European green plan.”

Commenting on the energy prices crisis, Chief Sylva said that “the main issue [is] the rate at which they are taking out investments in the oil sector was too fast and the development of renewables to fill that gap was also too slow.”

The panel further talked about having African funding to help in energy development. Abou-Zeid said that “last June we were able to launch the African Market, which by 2040 will be the biggest global market for exchanging energy and connecting producing and demand areas through huge networks,” adding that this project was supervised by Egypt and the African Ministerial Committee.

Abou-Zeid also praised the Haya Karima initiative as it works on the three priorities required to develop the African Continent, which are water, energy, and digitalization.

During his opening speech, dmg events CEO Christopher Hudson expressed his delight that the event was “graced by the presence of the president of the Republic of Egypt, H.E. Abdel Fattah Al Sisi, highlighting not just the importance of the next three days for the energy sector not only for North Africa and the Mediterranean region, but its importance to the global energy sector and the role that Egypt plays in that sector.”

“The Egypt Petroleum show has become and grown to become a significant annual gathering of energy industry, which connects the international community with speakers, exhibitors, and attendees from over 60 countries this week,” Hudson noted.

In all of its editions, EGYPS has enjoyed remarkable success in bringing energy leaders together and standing out as one of the most prominent oil and gas events in the Mediterranean region and North Africa. As Egypt has been confirmed to host the United Nations Climate Change Conference (COP27), this year’s edition comes at a critical time to help convene the industry’s transition.