EOG Celebrates “She is Energy”, Launches Women in Energy Network 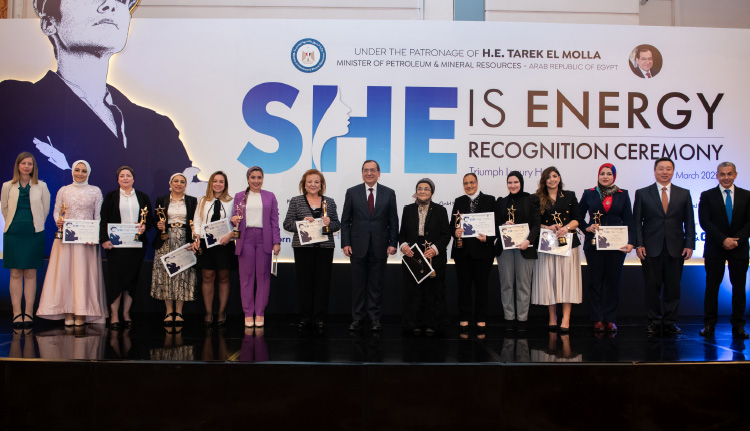 In its commitment to promote a gender-inclusive energy sector, “She is Energy”, organized by the Egypt Oil & Gas (EOG) Committee, was an elaborate event to commemorate international women’s month as well as to officially announce the establishment of the Women in Energy professional network and EOG Committee’s Women in Energy Taskforce.

Attended by the industry’s leading figures from both the government and corporate world, the event was honored with the presence of His Excellency Minister of Petroleum and Mineral Resources Tarek El Molla, who has not only taken decisive steps to create a prosperous energy sector but has also ensured that women are equally involved in the industry’s continuous success.

“Please allow me to thank Egypt Oil & Gas for organizing this important event as usual, giving us the opportunity to celebrate and appreciate women. Looking around, I am really pleased to see many of our key partners represented here today. This really confirms that we are partners, we are one team, one industry,” El Molla said during his speech. “The month of March is a very special one since we internationally celebrate Women’s Day as well as celebrating Mother’s Day on the domestic level. In my humble opinion, every day should be a day where we respect the abilities of women.”

The event also witnessed an opening speech by the CEO and Founder of Egypt Oil & Gas (EOG) Mohamed Fouad. “With the support of His Excellency and through our newly established Women in Energy network, ‘She is Energy’ is our yearly industry gathering not only to celebrate the success of women in our sector, but also to motivate younger generations and to ensure the diversity of our genders in our sector is a common cause for everyone, not just for women.”

He also emphasized the importance of gender equality in addressing the upcoming global challenges that humanity will have to face due to climate change. “This government and our Minister here today have made it crystal clear that the equality between women and men is imperative for us all,” said Fouad. “Fighting the biggest challenges of climate change while disregarding the contribution of half of humanity is just like boxing Muhammad Ali with one hand behind your back,” he added.

EOG Committee Chairman David Chi, being the Vice-President of Apache Corporation and Country Manager for Apache in Egypt, also gave an equally inspiring speech with his opening remarks. “We are here to celebrate the critical role that women play not just in our industry but in our everyday life,” Chi said. “When we talk about ‘She is Energy’, we are talking about DEI, which means diversity, equality, and inclusion. And that has been on the top of the agenda for a lot of companies and organizations, from governments to corporations to non-profit organizations.”

During his speech, Chi outlined the remarkable progress that Egypt has made in women’s inclusion in both government and the private sector but insisted that there is still more work to be done. “Progress has been made, but it’s not enough. We need to continue to do more and there are many things that we need to do,” Chi said. “We need to continue to evaluate our HR policies in terms of how do we promote and how do we hire.”

In commenting on the establishment of the Women in Energy as a professional network and an EOG taskforce she said, “Several of us had the idea that it is time to have an official professional women’s network. We’re going to call it ‘Women in Energy’ and the idea is really to connect us all together, really develop us as women so that we can reach our full potential in this industry,” Rowley said. “I do want to thank personally His Excellency, Mohamed Foaud, and David Chi who when they first hear of this idea, they wholeheartedly embraced it and suggested we put it as a sub-committee under Egypt Oil & Gas to develop the initiative.”

Adding to her speech earlier, Rowley opened up the discussion to explain the importance of the Women in Energy network saying “I think it’s more than time to establish something a little bit official, and what better time than when we have multiple female managing directors to act as role models and help encourage the next generation to build their careers?”

For her part, Denisse Abudinén, CEO of ENAP Sipetrol and General Manager of ENAP Sipetrol Egypt branch, said “The base for this committee is to try to help all the women in the sector overcome their professional and personal challenges in order to develop their careers. I would like to especially support the youngest ones, the ones performing in the technical departments, because I know it’s so difficult sometimes to try to do your [job].”

As Siemens Energy Egypt’s Managing Director, Layla El Hares also highlighted the importance of offering a support network for women working within the energy, saying: “One of the reasons [why] we are setting up this community [is] to be able to have a vast network of women, to share experiences, share stories as per advice, maybe also share best practices in different companies. The reason we are doing this is because we want to make their life better in the workplace, ultimately because we need them in our [companies] to actually succeed. We need diversity.”

Recognizing the important women leaders who have driven the industry forward and have had remarkable accomplishments was a key part of this occasion as it came to a close. For this reason, the following women were named the award-winners during the ceremony in recognition of their impressive contributions to the energy sector: