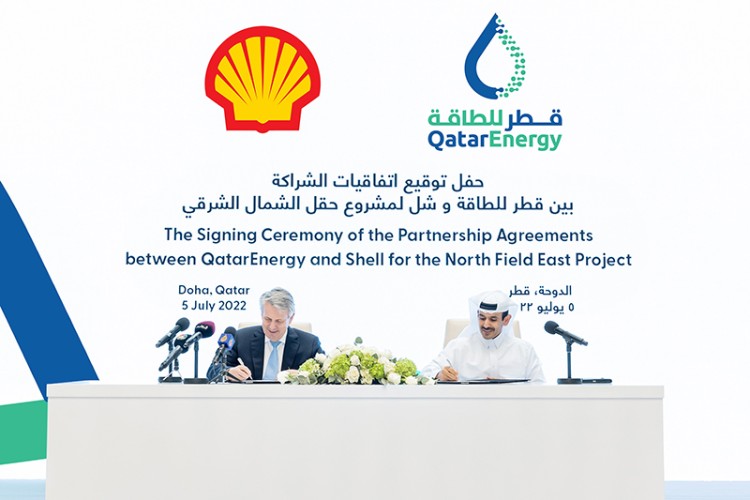 Shell has been chosen by QatarEnergy to be the fifth partner in the North Field East (NFE) expansion project, which is the single largest project in the history of the LNG industry.

Saad Sherida Al-Kaabi, the Minister of State for Energy Affairs, Ben van Beurden, the President and CEO of QatarEnergy, and other top officials from both firms participated in the signing of the collaboration agreement at QatarEnergy’s headquarters in Doha.

In accordance with the contract, QatarEnergy and Shell will join forces to form a new joint venture business (JV), in which QatarEnergy would own a 75% stake and Shell the remaining 25%. With regard to the NFE project as a whole, which consists of 4 mega LNG trains with a combined nameplate LNG capacity of 32 million tonnes annually, the JV will own 25% of the project (MTPA).

In remarks at the signing ceremony, Saad Sherida Al-Kaabi said: “We are very pleased to have Shell join us as a partner in this mega project, to which we have committed ourselves. We have lived up to that commitment, as well as to our global reputation as a reliable and trustworthy energy provider.”

On his part, Mr. Ben van Beurden said: “We are committed to maximize the value of the LNG expansion for the State of Qatar and continue to be a trusted, reliable and long-term partner in Qatar’s continued progress,” Mr. van Beurden concluded.

In a series of partnership announcements for the $28.75 billion NFE project, which would increase Qatar’s LNG export capacity from its present 77 MTPA to 110 MTPA, this arrangement is the fifth and last one.