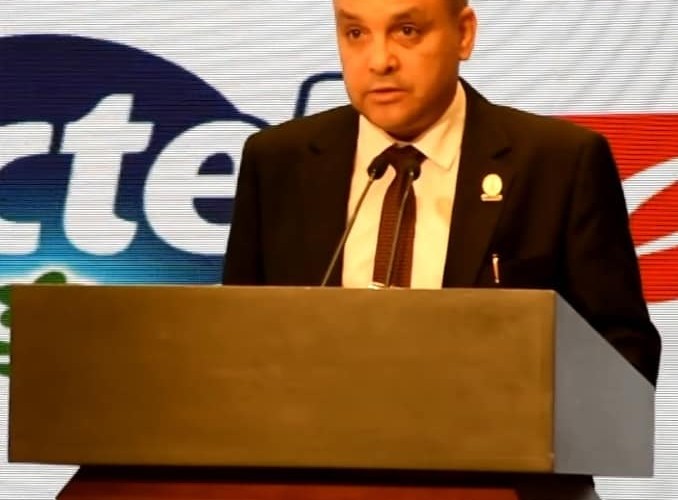 Minister of Petroleum and Mineral Resources, Tarek El Molla, stated that the road to the new Republic has witnessed, during the past eight years, tireless efforts that have resulted in outstanding economic and social results. El Molla added that this would not have been possible without the strong will of the political leadership and the economic reforms it insisted on implementing and the political stability available to Egypt.
El Molla’s remarks came as he reviewed the achievements of the petroleum sector in a speech during Al Gomhuria Newspaper Conference and Exhibition, entitled ‘Egypt El Sisi… The Road to the New Republic’, which is being held under the patronage of Prime Minister Mostafa Madbouly.
Nael Darwish, Ganoub El Wadi Petroleum Holding Company (Ganope)’s Chairman, delivered the speech on behalf of the Minister of Petroleum.
“It would not have been possible to achieve the desired development plans in our economic program without relying on the main engine of development, the petroleum sector, as the cornerstone of Egypt’s economic and social development because of its vital role in pushing the wheel of production and supplying economic and development projects with the energy needed to operate them,” El Molla said.
Therefore, the Egyptian government has given priority in its work strategy to creating an attractive investment climate, transforming challenges into investment opportunities, and committing to paying the dues of foreign partners, which has contributed to increasing the attractiveness of the petroleum industry to encourage the intensification of research and exploration activities in Egypt’s various onshore and offshore oil regions.
The petroleum sector was able to achieve many success stories during the past two years despite the Coronavirus pandemic.

According to the minister, the Egyptian petroleum sector’s exports increased during 2021 by 85% to reach about $13 billion. Moreover, the sector achieved a surplus in the petroleum trade balance, starting in 2020, for the first time after years of achieving a deficit, as the surplus in 2021 amounted to about $2.9 billion.
Additionally, the sector witnessed the signing of 37 petroleum agreements with international companies to search for oil and gas with minimum investments of $8.1 billion, and “we were able to attract a number of major international oil companies for the first time in the field of research and exploration,” he said.