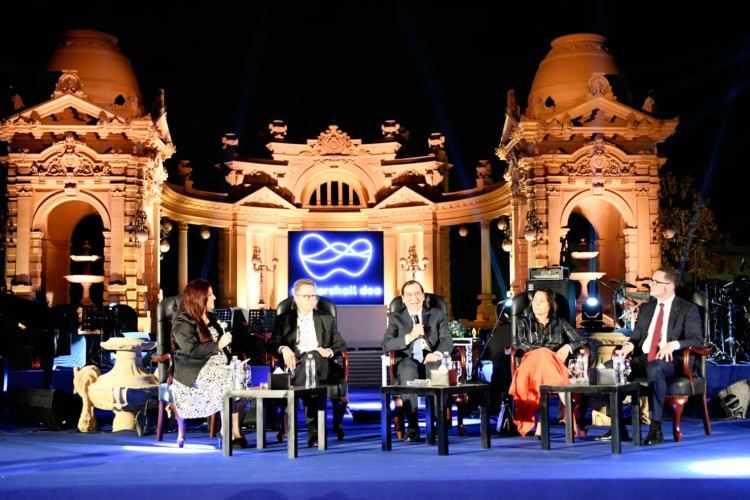 Minister of Petroleum and Mineral Resources Tarek El Molla participated in a panel discussion held by the German embassy in cooperation with the German company Wintershall Dea to celebrate its partnership with the Egyptian petroleum sector, the ministry said in a statement.

The session was held under the title “A Sustainable Future for Energy in Egypt” and also witnessed the participation of the German Ambassador in Cairo Frank Hartmann; Wintershall DEA CEO Mario Mehren; and Houda Allal, General Director of the Observatoire Méditerranéen de l’Energie (OME), in the presence of leaders of the petroleum sector and a number of heads of international and local oil companies.

During the panel, El Molla stated that the priority now is to expand research and exploration activities to achieve more discoveries and increase production, especially from natural gas. Egypt has a great history in the oil and gas industry, a strong infrastructure, and distinguished expertise and skills, which encourages foreign companies to work and pump investments in them, given that it enjoys promising investment opportunities, El Molla pointed out.

The minister highlighted the importance of border demarcation operations with neighboring countries and the formation of regional and international strategic relations based on trust and mutual benefit, whether within the framework of the East Mediterranean Gas Forum (EMGF) or outside it, in achieving successes, noting that the system of cooperation and integration between petroleum sector firms and foreign companies resulted in the implementation of large projects in the field of research and exploration and the signing of 108 agreements with a minimum investment of $22 billion during the last eight years.

For his part, Ambassador Hartmann stated that the partnership between Egypt and Germany, which extends for more than 70 years, has contributed greatly to achieving many benefits for both sides, and that Germany considers Egypt a strategic partner and seeks to contribute to its infrastructure development processes and pump investments in various fields, especially in the field of hydrogen production, pointing out that holding COP 27 in Egypt confirms the importance of its regional role in the region and the continent of Africa.

Meanwhile, Mehren highlighted the company’s commitment to expanding its business portfolio and pumping new investments in Egypt, praising the tremendous development witnessed by the financial and legislative systems in Egypt, especially in the petroleum sector, which made it more attractive to investors’ interest in addition to the growing role of Egypt as a regional energy hub.

Allal also noted that the upcoming COP 27 is a great opportunity for the African continent and the Mediterranean region to present their views on the issue of climate and energy transformation efforts and that Egypt is the best example of sincere efforts to overcome the inability to meet basic energy needs until transforming into a regional energy hub. She praised the idea of ​​establishing the EMGF and its expected impact on the future of energy in the region and the world.