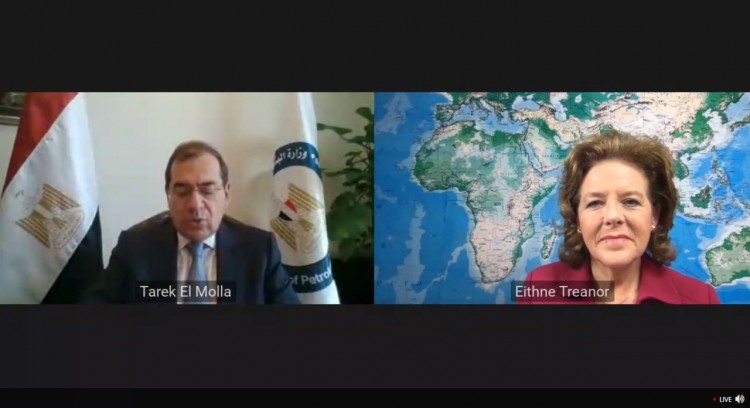 During the online event, the minister reflected on the value of the EMGF’s statute stating that “this is the era of cooperation among these countries in the East Mediterranean.

” He continued saying that natural gas would be “a reason for economic cooperation and [will be] an added value to the economies of our countries as well as the welfare of the people of these countries.”

When it comes to investments, the petroleum sector is a leader in attracting foreign investments into the state. The minister illustrated the importance of developing and creating strong relationships with regional and international partners, noting that boosting cooperation does not only bolster foreign investments, but it also reflects well on Egypt’s status.

El Molla also delved into a myriad of issues that are important to Egypt’s petroleum sector and elaborated on Egypt’s plans to expand and modernize the oil and gas sector. “We want to make sure to put Egypt’s oil and gas industry in a position where it can withstand challenges,” the minister commented on how the ministry capitalizes on the Modernization Project. According to the minister, the Modernization Project addresses all disciplines in the oil and gas industry, however, he drew special attention to the Human Resources (HR) aspect. When it came to the HR program, the minister focused on “how we can enhance the capabilities and develop them [for] future leaders,” noting that providing them with the tools needed would make them in a better position to lead the industry.

El Molla further talked about a vital issue of our time which is diversity in the petroleum industry. El Molla noted that the ministry aims at creating a gender-balanced profession, taking into consideration that currently, women take up approximately 25%-30% of management positions in the industry. The minister also discussed the petroleum sector’s role towards the issue of climate change; affirming that the industry is striving towards reducing emissions in compliance with international laws.

On a final note, the minister reflected on the decision behind postponing EGYPS 2021, noting that it was the conscious decision in order to lessen the risk of infection. He reckoned that with the EMGF’s statute signage, he expects that more companies will take part in EGYPS 2021, as it opens more doors for more opportunities.