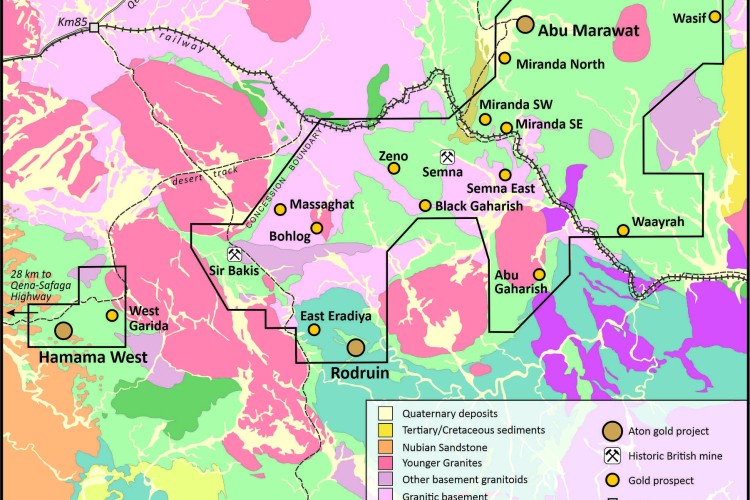 The company said that this period will be added to the final exploration period of its current exploration license at Abu Marawat which will allow Aton to complete the maiden mineral resource estimate (“MRE”) at the Rodruin deposit, as well as updating the existing Hamama West MRE.

“We are very pleased to announce that this extra time has been added to the term of the Abu Marawat exploration licence, primarily to make up for time unavoidably lost during the Covid-19 pandemic. We wish to thank the Egyptian Mineral Resources Authority and the Ministry of Petroleum in Egypt for their continuous support and their assistance in making this happen,” said Tonno Vahk, Interim CEO.

“We will complete the diamond drilling at Rodruin within the next fortnight, where we have now drilled well over double the originally planned number of metres. Work is already well underway on the revision of the Hamama West MRE, following the completion of the RC drilling there at the end of August, and we will start working on the Rodruin maiden MRE immediately on receiving the final assays from the drilling programme in early 2023 {….}.The extra time we have been granted will also allow us to continue our ongoing exploration on the Concession as a whole, and we plan to start drilling several of our highly prospective regional targets during 2023, including Abu Gaharish, Semna and our recent new discovery at West Garida, ” he added.

“Next year is really shaping up to be a very significant year for Aton Resources, and also for our partners at EMRA and the MoP, as we plan to move forwards to the Abu Marawat mining licence, and advancing the development of the first gold mine on the Abu Marawat Concession at Hamama West. Exciting times lie ahead,” said Vahk.