THE OIL PRICE GAME AND THE GCC: CHALLENGES, IMPLICATIONS, AND FUTURE SCENARIOS 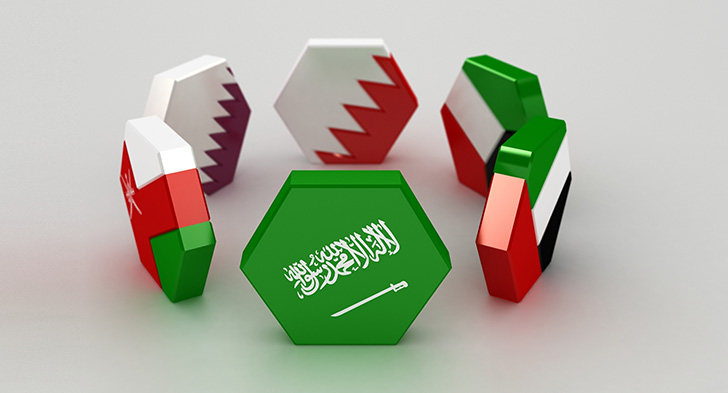 Slumping oil prices have put pressure on the Gulf Cooperation Council (GCC) economies, forcing the regions countries to continue with painful fiscal settlements and suffer from less government revenues.  The price drop sounds to be more permanent, as the oil supply glut continues due to developing new exploration and drilling technologies, the reemergence of major oil producers such as Iran and Iraq, in addition to the slow economic growth in emerging markets that generally drive international oil demand, according to Bonds&Loans. In the light of the previously mentioned factors and the reform progress made by the GCC countries to overcome the current hardships, this article aims to build future scenarios for the GCC economies after years of oil price instability.

The fall in oil prices started in 2014 from a peak of $115 per barrel to a bottom of $35 at the end of February 2016, and the abrupt downturn is considered as one of the most important global macroeconomic developments.

Oil exporting countries had to take a serious action to stop the oil price deterioration; that is why in November 2016 the Organization of Petroleum Exporting Countries (OPEC) has reached a deal among all 14 member countries to curtail oil production for the first time since 2008. The members have agreed to cut production by about 1.2 million barrels per day, or about 4.5% of production, to 32.5 million barrels per day. As a result, Brent crude prices were up over 8% as the deal was announced, trading around $50.12 a barrel.

Moreover, OPEC announced in May 2017 that it would extend cuts in oil output by nine months to March 2018. Oil prices extended earlier losses shortly after the announcement as traders reacted to the developments. Brent was trading 4% lower at $51.80 a barrel.

Lately, the International Energy agency (IEA) released a report stated that fossils fuels are no longer the largest recipient of investment in the energy sector, highlighting that Investment in the electricity sector received the largest level of investment for the first time ever, growing its share by 12% points to 43% between 2014 and 2016. In comparison, over the same period, investments in upstream oil and gas fell 44% because of the fall in oil prices.

“What we see is no major rebound,” Fatih Birol, Executive Director of the IEA said about market prices in the aftermath of the OPEC deal. “Therefore what worries me a lot is, around 2020s, a major demand-supply gap with serious implications for the markets may occur,” Birol added according to CNBC.

In general, the current slump in crude prices is similar in magnitude to the decline that happened in 1985-1986, when OPEC members reversed earlier production cuts, and in 2008-2009 at the outset of the global financial crisis. It is worth noting that the 1985-1986 drop was mainly supply-driven, while the decline in 2008-2009 was almost entirely due to a collapse in demand, according to Kenneth Rogoff, Professor of Economics and Public Policy, Harvard University in his article to the World Economic Forum titled “What’s behind the drop in oil prices.” “The current price decline appears to be a mix of the two previous issues”, Rogoff added.

The GCC economies are currently affected by macroeconomic fluctuations, financial instability, and severe job markets, mainly because of the drop in oil prices. This situation calls for an urgent, deep, and challenging transformation that GCC countries will need to undergo to be able to achieve desirable economic growth.

Over the past two decade, GCC’s high dependence on oil and gas fiscal revenues did not decline despite their efforts to speed up economic diversification. During 2011-2014, GCC’s hydrocarbon exports represented about 70% of exports of goods and services on average, according to the International Monetary Fund (IMF). Fiscal dependence on hydrocarbon revenues was even greater, accounting for over 80% of total fiscal revenues on average.

Hence, factors such as macroeconomic stability, supportive regulatory framework, and institutional mechanisms are essential requirements for diversification. Another element causing diversification slowdown is the impact of foreign direct investments (FDI), which are still lower than the average level before the financial crisis in 2008, except for the United Arab Emirates (UAE) as it succeeded in raising its FDI by 117% between 2008 and 2015, Value Partners Management Consulting stated.

In 2016, GCC economies have recorded a sharp slowdown amidst tightening liquidity and investor uncertainty, as all GCC countries except Kuwait had seen economic contraction. “Growth in GCC countries is projected to slow further from 1.9% in 2016 to 1.6% in 2017, reflecting the drop-in oil production resulting from the November 2016 OPEC agreement,” said Bonds & Loans in an article titled “Low Oil Price is Testing GCC Commitment to Currency Pegs.”

Furthermore, GCC countries had to revise how they fund their public goods and services and cut their government expenditure. Some GCC governments issued international bonds to ease the burden on fiscal reserves and improve overall market liquidity. The Kingdom of Saudi Arabia (KSA), for instance, made headlines when it issued international bonds at a grand scale believed to be worth $ 17.5 billion, which was the biggest bond sale from an emerging market nation. In addition, Qatar raised $9 billion in sovereign bonds and Abu Dhabi sold $5billion worth of sovereign bonds, A World Bank Group Publication for the Gulf Cooperation Council Economies informed.

“The drop in oil prices has put significant pressure on GCC fiscal and external account balances,” said Mohamed El Jamal, Waha Capital’s Managing Director. “We have seen other oil exporting economies rebalance through a mix of devaluations across Russia, Kazakhstan and Azerbaijan, to name a few and fiscal policy‎; in the case of GCC economies, given the US dollar peg, the burden of rebalancing has been mainly on the fiscal side so far,” El Jamal added, according to Bonds &Loans.

On the revenue side, GCC have finally decided to introduce a value added tax (VAT) by 2018; this comes after years of pressure from the IMF. The VAT is considered as the first tax of its kind on citizens and residents of the gulf region, who have long been accustomed to a low tax environment. Although there will be a number of exemptions and the rate, at 5%, is low by international standards, this is liable to be the start of a concerted effort by the GCC governments to widen and deepen the tax base, according to dun& bradstreet’s report titled Low Oil Prices, Part II: Geopolitical and Socio-political Impacts.

Moreover, GCC countries have a great share of expatriates and immigrants, which makes these economies heavily affected by high unemployment rates, as significant portion of employment is provided by the public sector and financed through exhaustible oil revenue, according to Value Partners Management Consulting. GCC governments have been encouraged by international institutions, such as the IMF to accelerate structural reforms and create jobs for their swiftly growing labor forces.

GCC countries share main challenges, which need to be successfully managed in order to bring pre-crisis growth rates back, such as decreasing dependence on oil through diversification and consumption. Moreover, GCC should focus on relaying on alternative sectors and shifting to a consumer-led economy; by decreasing the percentage of fiscal rev-enues generated by the oil and gas industry.

Another Challenge facing GCC economies is boosting the functional role of the private sector. Narrowing the gap between public and private sector wages would make private sector employment more attractive for nationals.  In many GCC economies, state-owned compa¬nies may be impacted by government fundamental risks and inefficiencies, while few countries, such as the UAE, are already using public private partnerships (PPPs) and having a strong regulatory framework that encourages private investments.

Moreover, creating an ideal future environment for Small and Medium Enterprises (SMEs) is another challenge facing GCC countries, as the public sector focuses on generating new efficiencies and financing the current wage bill.

SMEs have been promoted for job-creation potential across the GCC. However, SMEs in GCC countries have a lot of financing issues, gathering a low percentage of total lending, mainly due to the historical heritage of oil-based economies, dominated by very large enterprises,  Value Partners Management Consulting stated.

Increasing banking system liquid¬ity and solvency is another issue to be handled. The GCC banking system is well capitalized and solvent, yet the system faces some issues that should be properly addressed, such as Government decreasing deposits aimed at financing deficit, deterioration of asset quality related to lower economic activity, and increasing pricing competition among banks, according to the IMF.

In terms of successfully overcome the current challenges, the UAE is the only GCC country that has an advanced level of  economic and financial diversification due to the develop¬ment of strategic industries, such as logistics and retail, in addition to their strong real estate sector.

Since the oil prices began to drop in 2014, GCC region has been implementing reforms to control the decline in oil revenues. Most of GCC governments had to rationalize their expenditure on the short run and implement long overdue fiscal and economic reforms, including the adjustment of energy prices and cutting subsidies.

Both Saudi Arabia and the UAE are leading the GCC in raising energy prices and cutting subsidies. In June 2015, the UAE took serious steps towards liberalizing domestic gasoline and diesel prices. As a result, Saudi Arabia initiated substantial energy price reforms in December 2015 to raise domestic prices gradually till 2020. Hence, other countries in the GCC, such as Kuwait, Bahrain, and Oman, have followed the UAE and the KSA, outlining plans to boost energy prices in the near future.

In addition to energy price reforms, many GCC countries have begun to implement policies to improve energy efficiency and exploring the feasibility of generating electricity through renewable sources.

While some of the GCC countries have taken a step in the right direction, the road for reform is still long and fraught with risks and GCC countries need to continue to ensure the success and sustainability of their energy price reforms. For reforms to succeed, the IMF suggests that the GCC countries should have a clear vision, social inclusion of emigrants and expatriates, effective and transparent communication strategy, and well-designed compensatory schemes to reduce the negative effects of the reform on households and industry.

There are some key factors impact¬ing oil price evolution, such as, oil production, stock investments in oil industry, oil consumption, and Federal Reserve. These factors draw three main scenarios for the future of GCC economies in the light of oil prices drop, according to dun& bradstreet.

The first scenario is that sup¬ply surplus continues over the next few years, but that global growth conditions improve in parallel, narrowing the gap between oil supply and demand.  The second scenario is that GCC countries might face geopolitical events relating to a significant oil-exporting country curtail oil supplies into the medium term, raising oil prices back above the $75 barrel level rapidly, thus attracting further investment into the sector and leading to a milder longer-term rebound in oil prices.

Being highly oil dependent economies, GCC countries have been strongly im¬pacted by oil price drop, facing macroeconomic in¬stability and financial hardships. To successfully handle this fatal issue, GCC countries should decrease their dependence on oil, take serious actions to focus investments in the private sector instead of the public sector, facilitate the proliferation of SMEs by developing an ideal environment for them, and improve the banking system in terms of liquidity and solvency.