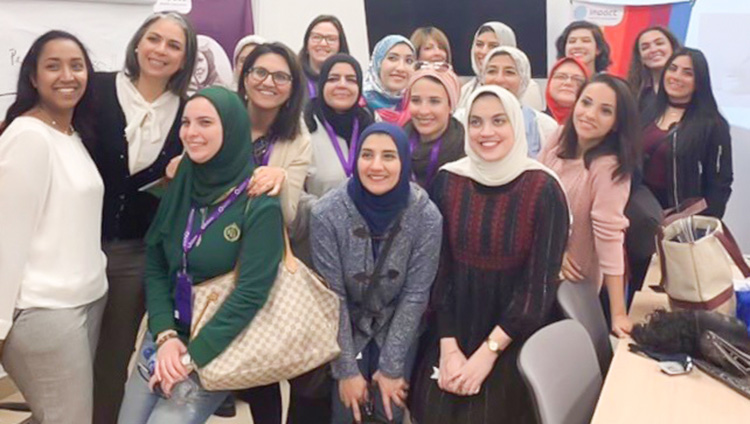 Pictures of some of the most iconic women in the history of Egypt were seen at every corner of the room, as Schlumberger Egypt held a distinguished workshop promoting the empowerment of females working in the oil and gas sector on March 20 at the company’s headquarter in 6th of October City.

The workshop, commemorating International Women’s Day and Mother’s Day in Egypt, brought together female employees from Schlumberger and its partners, who engaged in a thought-provoking session and shared their inspiring stories. Participants also had the opportunity to discuss relevant topics concerning time and career management, as well as ways to enhance their participation to the oil and gas industry.

The event kicked off with a speech from Karim Badawi, Managing Director for Egypt and East Mediterranean. “Do not put a glass ceiling for yourself or establish a perception that you cannot do something, because nothing is impossible. Our company is built on meritocracy and performance, and for this, there is no difference between a man and a woman,” he said.

Badawi reinforced the idea that the industry continues to support and empower more women, with a special recognition for working mothers. He further shed light on misconceptions surrounding the oil and gas industry that he believes are entirely different from reality. “The reality is that the industry is actually equally fit for men and women because it is more based on the talents that people have, and on their innovation and creativity.”

That is exactly why Badawi thinks that, if Schlumberger does not tap into the pool of talented women, it will miss out on extraordinary expertise. He further emphasized on the values that females bring forth to the community in order to ensure societies are operating well, saying that there is a strong correlation between the strong performance of companies and having female CEOs.

Yasser Amer, Schlumberger Human Resources (HR) Manager, then commenced the workshop with a call for the attendees’ feedbacks on a pivotal matter. He asked them, “why is it important, from your opinions, to have women participate in the workplace, and why is it important for the economy? We never think why it is important for companies, governments, and countries to make sure that the employment rates of women are getting higher and higher every year.”

Each participant had her opinion; nonetheless, there was a growing consensus that economies thrive upon talented women, in the same way it does with talented men. According to Amer, the workplace should represent society, which is 50% men and 50% women. If you are only utilizing half of the workforce, that means you are missing the other half. It is all about capturing talents, he indicated.

Schlumberger  HR Manager concluded from the discussion that the productivity of nations and companies really goes down to and highly correlate with the employment rate of women. “There are more practical and pragmatic reasons to why women have to be involved in organizations and play a key role in economies. It is not a luxury anymore. It is not an option. The job for females is as important as for males,” Amer added.

This year’s slogan for International Women’s Day was “Balance for Better”, so the workshop explored gender diversity and what it takes to have balanced equality between men and women in the workplace. However, it was not only a discussion on gender equality, as it rather tended to shift the participants’ focus to work-life balance. The workshop took a step further to delve into personal balance and how to have an internal balance between one’s work, children, social life, and activities, without missing out on life.

Additionally, participants engaged in a fun yet informative activity, where female attendees conducted a self-assessment exercise that measures the level of satisfaction in nine areas that represent everyone’s life. Through the activity, participants were led to discover their weaknesses, strengths, and core values. Accordingly, every participating woman should be able to get a snapshot of her life and find out the career path that suits her best.

At the end of the day, attendees were enthralled with another fun activity in which they were divided into three groups, wore costumes, and shot a video to promote and celebrate female empowerment.