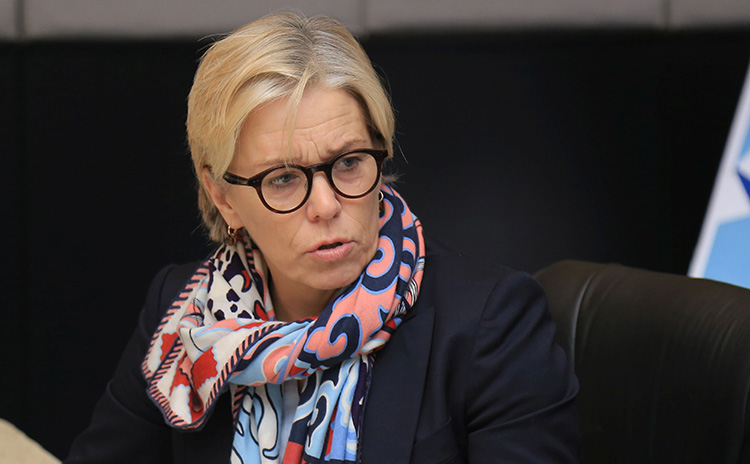 DEA Deutsche Erdoel AG, an international operator in the field of exploration and production of crude oil and natural gas based in Hamburg, Germany, has recently witnessed significant increase in oil and gas production from its Egyptian fields in the Gulf of Suez and the Nile Delta.

The company has been active in Egypt since 1974 and has produced over 650 million barrels of crude oil in the Gulf of Suez during the last 30 years. In 2013, DEA started natural gas production from the Disouq field in the onshore Nile Delta. The company is further a partner in the West Nile Delta project, which corresponds to one of the largest projects in DEA’s portfolio.

Egypt Oil & Gas had the opportunity to join Maria Moraeus Hanssen, DEA’s CEO, at an exclusive press conference in Cairo and discuss the company’s achievements and prospects in Egypt, as well Hanssen’s insights on the future of the Egyptian oil and gas sector.

In order to enhance DEA’s presence in the country, Hanssen announced the company’s commitment to invest $500 million in its facilities in Egypt. According to her, this amount will be injected across the company’s portfolio through the next three years, starting from 2018. “In our portfolio in Egypt, we have many resources that can still be developed; with a stronger balance sheet and more capacity, we would invest more in our current fields,” she stated.

The biggest part of this investment would be directed to the West Nile Delta project. However, DEA has further started a reinvestment program in its Disouq field to boost production from its facilities. “We have additionally negotiated new terms for the Gulf of Suez concessions in order to invest more in our existing assets,” she added. Commenting on these new terms, Hanssen disclosed that the agreements are still subject to parliamentary approval.

The West Nile Delta project, located in Egypt’s Mediterranean waters, represents a milestone to DEA and the Egyptian petroleum industry. Successfully delivered eight months ahead of scheduled start-up, natural gas production started in March 2017 from two of the project’s five fields, namely Taurus and Libra. Once the five fields come online, the project will add 250 million cubic feet per day (mcf/d) of natural gas to the company’s production in Egypt.

The project’s operator, BP, holds a 82.75% share, while DEA holds the remaining 17,25%. When asked if DEA intends to increase its shares in the West Nile Delta, Hanssen disclosed that the company do not expect BP to sell its shares. However, the company’s CEO stressed that, given the magnitude of the West Nile Delta project, DEA’s 17.25% share stills corresponds to the company’s largest investment across its portfolio. “If we look at DEA’s total portfolio in Norway, Germany, and Mexico, this investment that we have with BP is by far the largest we have in our portfolio now,” she stated.

Amidst Egypt’s ongoing efforts to modernize the petroleum sector, Hanssen declared that, as an independent oil and gas company, DEA sees Egypt’s attempts to liberalize the oil and gas market as encouraging. “It is easier for the company to be in a country where markets are liberalized and where the sale and off take of oil and gas are driven by the market and not completely dominated by the state… Should Egypt and the Egyptian authorities agree on the liberalization of the oil and gas market and more standardized export conditions, I think we can hardly see any disadvantage to Egypt in our portfolio.”

For DEA, the Arab republic ranks favorably in terms of concession systems due to the abundance of oil and gas resources. Given Egypt’s boom in natural gas production and prospects of being back to the gas exporting map, Hanssen affirmed that, whether the company will export its Egyptian supplies or not, the decision would depend on the country’s exporting conditions. “I believe there is a reason to think that Egypt may actually end up exporting gas in couple of years and I cannot rule out that we would be part of this export. We see the interest and the opportunities for Egypt to become a natural gas hub for the Mediterranean region and we will be very willing to be part of that.”

Commenting on DEA’s ongoing discussions on the merger with Wintershall, Hanssen clarified that the company’s shareholders have agreed with shareholders of Wintershall that they should seek to sign a merger agreement. “We are still in a non-commitment phase… What has been agreed between the two parties is that, in this merging, DEA represents one third of the value and Wintershall represents two thirds.”

She further explained that, from an Egyptian perspective, the merger would be very interesting. “We will take more commitments, more investments, and do more in Egypt than what we have been able to do in the last couple of years.”

“Even when this merger goes through, the plan is to IPO the company, to go to the stock market. This will represent big changes for DEA and our company’s structure. Last time I was in Egypt, we had the opportunity to sit with the Minister of Petroleum, and his excellence was very happy about this.” As she explained, for the national authorities, having larger contributor shareholders for the oil and gas sector is extremely positive.

Egypt as an Energy Hub

The press conference was concluded with Maria Hanssen expressing her beliefs that Egypt will succeed with its plan of becoming a regional energy hub. “Egypt is a big market for gas and has the potential for using more gas in industrial production. This big domestic market and exporting facilities obviously should favor Egypt. With our portfolio in Egypt today, we will favor such opportunity.”