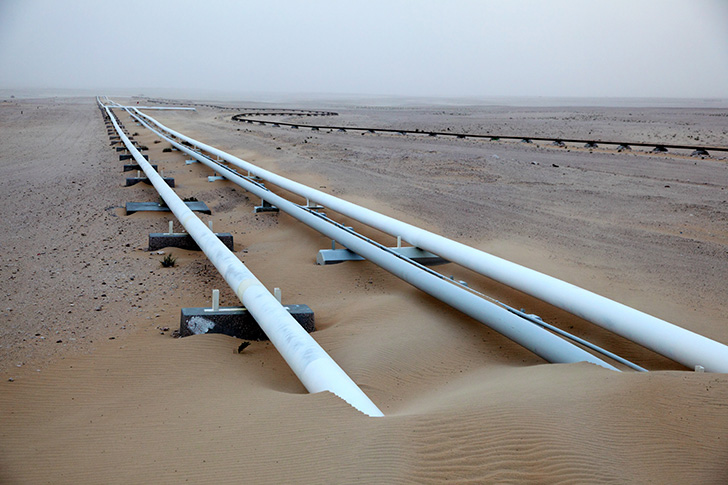 For a more aspiring and accomplished upstream business, the oil and gas wealth owning countries have long been involved with developing grand infrastructure projects. It has emerged as a primary need for world governments to ameliorate infrastructure conditions given the fierce energy market competition. On its part, the Egyptian Ministry of Petroleum and Mineral Resources is keen on upgrading, expanding, and developing its infrastructure facilities in efforts of enhancing the country’s oil and gas exploration and production projects.

Furthermore, in 2016/2017, several countries are aiming to stand as energy hubs in their regions. This goal is perceived as a way to flourish the country’s economy even if the country is not an energy producer or a petroleum wealth owner. Therefore, those countries pay severe attention to the upstream infrastructure and to developing this infrastructure in order to be able to contain oil and gas amounts that are enough to transfer the country into a hub serving the surrounding region.

For years, Egypt has been trying to improve its upstream infrastructure and develop its pipelines to transport oil and gas from fields to land processing units, and then to refineries, to storage tanks, eventually reaching exporting ports. This network of pipelines provides an easy access to petroleum exports.  Meanwhile, the Egyptian Importing ports and Floating Storage Regasification Unit (FSRU) helps bring in liquefied natural gas (LNG) needed to meet local market demands. These export and import activities boost the Egyptian economy through keeping the trade cycle on the move.

In relation to other countries in the area, who are still also trying to achieve the goal of being the Energy Hub for the region, Turkey is “fully aware of the importance of suppling security to become an energy hub in the region,” according to Elif Binici’s article, entitled Turkey’s Strategic Position in Energy Transit Gains Prominence. Hence; the country “is working on ensuring supply diversity through facilities such as storage, LNG and FSRU added Elif”

The North African country is working on raising the storage capacity in the Egyptian Red Sea ports and the Egyptian Mediterranean Sea Ports in order to make the best use of the country’s Infrastructure in transporting the oil and gas products.  This comes in line with the government’s efforts to boost the performance of Egypt’s energy sector and further help bolster its international position by offering more linkages to other international markets.

In this regards, Egypt’s  Country Manager of Rockhopper, Samir Abdelmoaty, stated in an interview with The Oil and Gas Year that “the oil and gas business is also great.” He added that in Egypt “[investors] have huge resources potential, human resources, the investment environment and the infrastructure in Egypt.”

In 2007, Robert Mabro’s book, Egypt’s Oil and Gas: Some Crucial Issues, stated that Egypt was keen on developing the liquefied natural gas (LNG) exporting infrastructure as this is the type of infrastructure development foreign investors will be interested to finance. However, as investors may be willing to fund export infrastructure systems, facilities developed for serving the domestic market may be deemed discouraging.

The Egyptian government owns most of the upstream infrastructure. Senior Associate at Zaki Hashem & Partners, Essam Hamdy, told Egypt Oil&Gas that “pipelines form a national network that is owned by the country. The liquefaction plants are owned by private sector. Meanwhile, the FSRUs are owned by the country itself.” He explained that the country awarded the 2 liquefaction plants to private sector as “at the time of building the two plants, the country did not have enough money to cover their high costs. Additionally; the companies that built the plants had excess production that is exceeding the market needs. Therefore; the best solution was to export the production of gas.”

The Egyptian oil and gas sector, including the government owned institutions, as well as the international oil companies working in Egypt use the privately owned plants to export their gas. Hamdy explained that “[gas firms] can use liquefaction plants upon reaching an agreement directly with the plant’s owner, not the country, based on certain specifications of the gas processed in it,” adding that “if the country wants to use the liquefaction plants it should reach an agreement with the plants’ operators and pay a certain fee as well.”

Meanwhile, the oil and gas firms can use the state owned upstream infrastructure as per the concession agreement as Hamdy pointed out that “the operator can pump production from the field to the natural grid, or to the nearest point of the grid.”

In order to execute state-owned upstream required infrastructure and to perform its maintenance work, the Egyptian government contracts service companies. For example; in 2016, the Ministry of Petroleum signed a deal with Saipem to develop the infrastructure of Zohr gas field through installing a gas export trunkline that is 26-inch and establishing additional 14-inch as well as 8-inch service trunklines. The contract with Saipem included the field’s Engineering, Procurement, Construction & Installation (EPCI) work which will be executed in up to 1700 meters deep water of 6 wells. The company is also required to place the umbilical system. Saipem had already finalized installing its floating pipe layer platform Castoro Sei (Beaver Six) at the Cypriot Limassol Port in order to be able to process its work in Zohr field.

In this case, Egypt is using Saipem’s upstream infrastructure in Cyprus for the development of its Zohr field. Yet, if Egypt installed a floating pipe layer platform it wouldn’t have to use the platform in another country which will save money and would help Egypt to offer the platform facility for other countries to develop offshore fields in the Mediterranean Sea.

Hence, the Egyptian Ministry of Petroleum has to sign contracts and to find financing institutions in order to be able to improve of the infrastructure.

In a region where top oil producing countries possess a huge share in the global energy market, the Egyptian government does not fail to notice the inevitability of bolstering its oil and gas sector. Egypt’s geographical location offers a huge advantage as the Arab republic is at crossroads with Asia, Europe, and Africa. This can achieve Egypt’s aspiration to become a regional energy hub where the country’s infrastructure facilities including pipelines, storage tankers, and terminal will be at the crossroad of several markets.

The Egyptian government is working on becoming a prominent energy hub in the surrounding region. This comes as Egypt is adopting a strategy to make use of its location in order to not only be an energy producer, but to become an energy transit country.

Energy producing countries and non-energy producing countries tend to use their geographical location to become hubs for energy.  For example; Turkey is not one of the major oil and gas producers, yet its geographical locations serves as a bridge between the east and the west. According to the book, entitled the Oil & Gas Year Turkey 2010, “Turkey plays a vital transit role connecting producers in Russia, the Caspian and the Middle East to world markets.”

Egypt and Neighbors for a Shared Infrastructure

An example for Egypt’s strategy is its signing of a deal with Cyprus in 2016 to receive gas via an undersea pipeline which is located in the eastern Mediterranean. The agreement is a part of Egypt’s plans to have a shared infrastructure with its neighboring countries to import and export energy. The Minister stated to Pipeline Journal: “this is part of the development of the east Mediterranean gas as a whole and I think our strategy optimally is to position ourselves as an energy hub in the region.”

In his interview with BP Magazine, El Molla said that  “we’ve signed agreements with Cyprus to bring their gas here, whether for our domestic use or to export on their behalf through our LNG facilities. There’s an opportunity to do the same with any other gas [sic] in the Eastern Mediterranean basin.”

Egypt has offshore pipelines connecting it with Cyprus; that is why the two countries had signed a memorandum of understanding (MoU) in 2015 to send gas from Cypriot Aphrodite field to Egypt to be re-exported. Early 2017, Egyptian Natural Gas Holding Company’s (EGAS) Chairperson, Mohamed El Masry, told Daily News Egypt that Egypt will start exporting natural gas in the second half of year 2019. El Masry explained that Egypt own infrastructure that enables the country to distributearound 9bcf/d of gas and to export 1.88bcf/d.

Egypt has also pipelines that help in increasing the country’s export and in connecting it to other countries. The country shares the Arab Gas Pipeline with Jordan and Syria, which has been executed over four phases. The Egyptian Ministry of Petroleum’s Website explains that the first phase of the pipeline is a 265 km length pipeline that extends from Egypt’s Arish to Jordan’s Aqaba port with a total capacity of 10 bcm per year. The second phase consists of a 390 km pipeline that goes from Aqaba port to El Rehab in Jordan. The third phase isa 30 km pipeline that runs from El Rehab in Jordan to the Jordan-Syria borders. While the fourth phase is a 330 km pipeline that extends from Jordan-Syria borders to Homs with the possibility to be extended to Syria-Turkey borders.

Like Egypt, Turkey has the potential to become oil and gas regional hub as it has gas pipeline projects between the east and west that are envisaged and are designed to deliver gas from Caspian and the Middle East to Europe through Turkey. These pipelines are known as the “Southern Gas Corridor” (SGC). In addition, the country’s pipelines include the South Caucasus Pipeline (SCP), Baku-Tbilisi-Erzurum Natural Gas Pipeline (BTE), and Turkey-Greece Interconnector (ITG). Turkey further has a number of planned pipelines including the Trans-Anatolian Natural Gas Pipeline (TANAP), going from Azerbaijan to Europe via Turkey and Georgia, and the Trans-Adriatic-Pipeline (TAP) that will be executed within the context of Southern Gas Corridor. The delivery of gas to Turkey through TANAP will start in mid-2018 and to Europe in 2020, according to the official website of the Republic of Turkey’s Ministry of Foreign Affairs.

Egypt, as well as Turkey, can enjoy the benefits of its perfect geographical location to become a regional hub for oil and gas which are representing an important factor for the flourishing economy.

The Egyptian infrastructure is already promoting Egypt to be an oil and gas transit country which is a part of its vision to become an regional energy hub. Therefore; the Egyptian government should keep maintaining the infrastructure and improving it to achieve the country’s goals and to enable it to export gas in the future .