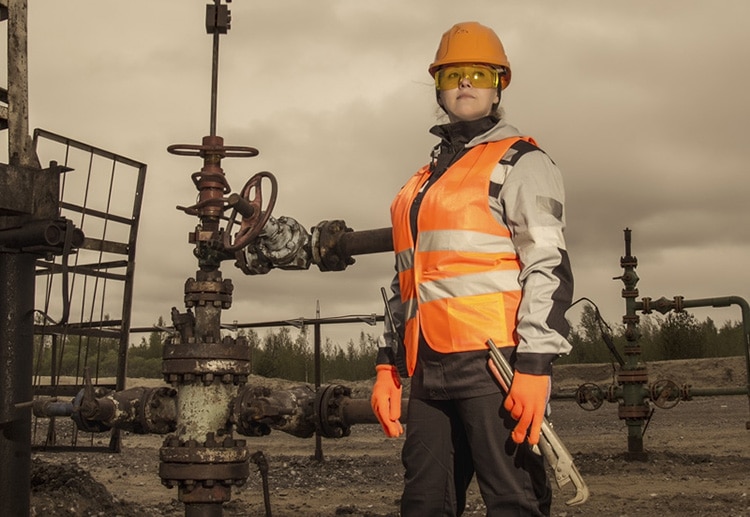 Despite the global move towards gender diversity in the extractive industries including oil, gas and mining, women are still under-represented. According to data analyzed by International Renewable Energy Agency (IRENA), women only account for 22% of oil and gas industry employment, despite the increase of the number of women graduated from engineering and technical faculties. The issue is subject to discussion and research trying to highlight the positive impact of gender diversity in such industries.

An introductory paper entitled “Gender in Oil, Gas and Mining: An Overview of the Global State-of –Play,” which was published in the Extractive Industries and Society Section of ElSEVIER Journal, tried to cast the light on this issue. It includes a number of rserches that examine gender in the context of the Extractive Industries Transparency Initiative and national policies of resource extraction. The paper was presented at a conference hosted by the World Bank Group  of “Gender in Oil, Gas, Mining: New Frontiers of Progress, Challenges and Solutions”.

The conference addressed experiences from around the world, highlighting the joint challenges that women may face while joining extractive industries. This paper addresses three aspects. The first aspect describes the framework for understanding and organizing the issues facing women’s progress in these industries and showcasing the rates of gender gap. The second aspect provides a comprehensive picture of women’s participation in oil, gas and mining sectors according to collected data from national statistics offices as well as other sources. The third one discusses the barriers that confront women’s participation in such industries.

According to this research, several evidences showed that gender equality in education and employment support the long-term per capita growth as women inclusion can improve productivity gains. However, women are still suffering from fewer opportunities to work full-time, less earnings and less voice. Thus, World Bank Globe developed a four-pillar strategy to close this gender gap.

The first pillar is to improve human endowments including topics related to health, education and social protection in order to reduce hazardous incidents that may occur within the extractive industries, which may help  to increase women chances to be included in these sectors. It also encourages girls to pursue education in the fields of science, technology, engineering and mathematics (STEM) at early age.

The second pillar is to remove constraints for more and better jobs. It emphasizes the scope on the gender gap in earnings which is largely attributable to education. Additionally, it illustrated that lack of essential workplace policies as (childcare, maternity leave, flexible rotations and work schedules and sexual harassment policies) declines women’s participation in  extractives sector. It recommends the need of implementing financial inclusion programs for women.

The third pillar addresses removing barriers to women’s ownership and control of assets. Small and medium enterprises (SMEs) owned by many women trying to enter supply chains, are typically low-profit investments with limited assets and capital, which makes it difficult for them to obtain finance. It also makes them high-risk and vulnerable to market variability.

The fourth pillar is about enhancing women’s voice and agency, and engaging men and boys. It highlights how the power and social norms affect gender roles in the extractive industries. Women’s voice can be increased by engaging them in consultation and decision-making process.

The paper stated that quality data is important  to help closing the gender gap in the industry. Yet, this method faces five challenges including inaccurate numbers, expansive nature of the industry, job composition of the industry, informal operations in mining and outdated data. However, data showed that female labor force in oil and gas industry account for 22% according to World Petroleum Council 2017 and they represent less than 14% in mining sector according to the International Finance Corporation. It, also, showed that women are underrepresented in most profitable and technical roles. So that the issue is not only to increase the number of women in the extractive industry but to position them to access better-paying jobs.

The paper, also, introduced several barriers that women confront in joining the extractive industries. Legal discrimination is one of them. In some countries, women are banned by law to work in mines and may have limited work to do including one-third of Sub-Saharan African countries. Additionally, some countries prohibited women from working in certain positions in oil and gas industry such as drilling and offshore rigs installation. This is besides the laws that ban women from working at night as well as the lack of protective legislations and unequal rights. In two-third of Sub-Saharan African countries, women have limited property rights.

Social norms are another thing. For example, in Australia, women weren’t allowed to work underground until the 1960s. In some societies, women can get bad reputation from being working in mines. Also, they can be seen as brining bad luck for mines, too. Their social responsibilities are another barrier for them. In addition, they may face sexual predation and violence. Moreover, women are, still, suffering from the lack of needed education and training which empower them to get higher-level positions in the industry. For instance, in China, women are barred from studying mining in the university.

During the conference, several leading oil, gas and mining companies presented strategies to achieve gender equality and diversity. However, they noted that the progress of closing gender gap is slow due to the cultural norms which shape main barrier for uptalking such strategies. One of the recommended solutions is lifting of legal barriers. Seven countries, including Fiji, Jordan, Moldova, Niger, São Tomé and Príncipe, South Sudan and the United Arab Emirates, have cancelled legal restrictions on women employment in extractive sectors.

The research concluded that other papers introduced at the conference, suggesting having affirmative action policies and gender quotas as a way to increase women participation. For instance, South Africa Mining Charter included a quota of 10% for women in the mining sector which proved its success in boosting women’s participation in extractive sector.