EMGF: Regulation of Gas Interests in A Hot Spot 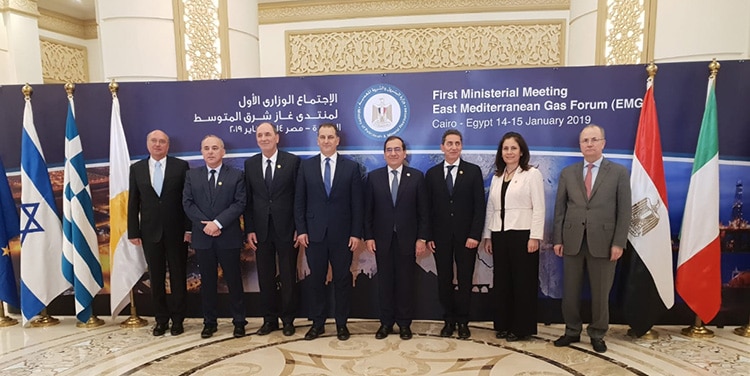 Amid the major discoveries that took place in the Eastern Mediterranean region during the past ten years, some regional countries including Egypt, Cyprus, Greece, Israel, Italy, Jordan and Palestine have agreed to establish the East Mediterranean Gas Forum (EMGF) as an international organization to utilize the full potential of the Eastern Mediterranean offshore gas wealth. The Minister of Petroleum and Mineral Resources, Tarek El Molla, announced that EMGF intends to respect the members’ rights of natural gas according to the principles of international law and support their efforts to benefit from their oil reserves and infrastructure.

In 2010, the United States Geological Survey estimated that the Levant basin and Nile Delta basin could preserve an average of 122 and 223 trillion cubic feet of recoverable gas respectively. Meanwhile, these discoveries accompanied multidimensional challenges to be exploited. For instance, some reserves were discovered in deep water so it is expensive and complex to be extracted. Additionally, there is insufficient infrastructure, limited local markets, and complicating monetization process in addition to geopolitical disputes.

These challenges stimulated the establishment of EMGF, too. The paper in question entitled “The East Mediterranean Gas Forum: Regional Cooperation Amid Conflicting Interests” and is written by Mona Sukkarieh, Energy and Political Risk Consultant, will showcase EMGF’s objectives, internal working mechanisms, and its efforts to assess prospects for monetization. What’s more, it will explore geopolitical dynamics and will end by focusing on bringing offshore Eastern Mediterranean gas to market.

On 14 January 2019, Cairo declared that EMGF will serve as a platform for structured and systematic policy dialogue on natural gas among the countries in the region leading to the development of a sustainable regional gas market. It has many objectives including assisting the creation of a regional gas market that benefits the members, ensure the security of supply and demand for the members, support producing countries and countries with gas reserves in the region, help consumer countries to secure their needs and ensure the environmental sustainability of gas exploration, production, transportation and infrastructure building.

One of the main challenges for the Eastern Mediterranean countries is the existence of several decades-old conflicts. This led to a need for reconfiguration of alignments and setting new intra-regional dynamics which could be reflected by EMGF. For instance, although they are in the East Mediterranean region, Syria, Lebanon and Turkey were absent from EMGF because of political issues. Syria’s international engagement was reduced as a result of the ongoing conflict. Lebanon refused to join EMGF due to the presence of Israel. In addition, it seems that the forum has deliberately excluded Turkey due to the poor or troubled relations between Turkey and Cyprus, Egypt, Greece and Israel.

According to the paper, the past decade has revealed promising potentials in the Eastern Mediterranean, yet, confronting challenges to be converted into exploitable commodities. The nature of these deep-water discoveries, size of the local markets and limited infrastructure didn’t allow the countries in this region the autonomy they needed to fully exploit and export these resources.

Accordingly, there is a need for a collaborative approach between the various players in the region which can help in reducing the costs and improving regional integration to make these resources competitive. EMGF provided this capability as a platform to coordinate such efforts.

Regarding Egypt, the discovery of Zohr field, which has converted Egypt from being a consumer and importer of natural gas to achieve self-sufficiency as well as being exporter in addition to its central location, its large market, existing infrastructure and the reforms that revived  the Egyptian gas sector, have put spot light on it. Following the discovery of Zohr field, Eni company mentioned the possibility of setting up a hub in which Egypt will distribute, transport and export gas from the regional discoveries.

What’s more, liquefied natural gas (LNG) prices play a key role in the deals so that the optimum exploitation of gas resources. In 2020, Egypt’s LNG exports from its Idku plant have stopped for several month due to low spot prices resulted from the lockdowns and Covid-19 spread. Low prices in 2020, also, halted several deals and postponed others. The research stated that the “coronavirus crisis exacerbated the supply-demand imbalance in the short term. However, the full impact of the crisis on the industry cannot yet be measured.”

This brings two central issues to light including; “the importance of improving intra-regional gas infrastructure connectivity and pursuing policies at the national level to encourage demand growth and continuously aim to expand the share of natural gas in the energy mix”. This is what EMGF seeks to do. It also helps the governments as well as companies to have competitive fiscal framework for liberalizing markets and opening access to relevant infrastructure, encouraging regional cooperation and harmonizing policies and regulatory frameworks.

The paper concluded that EMGF has to give attention to some issues in order to impose itself as an efficient player that could facilitate the monetization of the region’s resources. For example, how relations between Turkey and its neighbors are going to evolve might affect the Forum. It is possible that Ankara’s relations with its neighbors could be stabilized due to a diplomatic push. So, Egypt and EMGF should demonstrate enough creativity and flexibility to remain relevant.

It should also follow some international standards to maximize the benefits derived from the exploitation of natural resources like overcoming corruption and following health, safety and environment (HSE) measures. It also should enhance transparency through launching an online platform and encouraging members to implement the Extractive Industries Transparency Initiative. In addition, EMGF should support the exchange of its members’ skills through training sessions and establishing institutions of higher education.