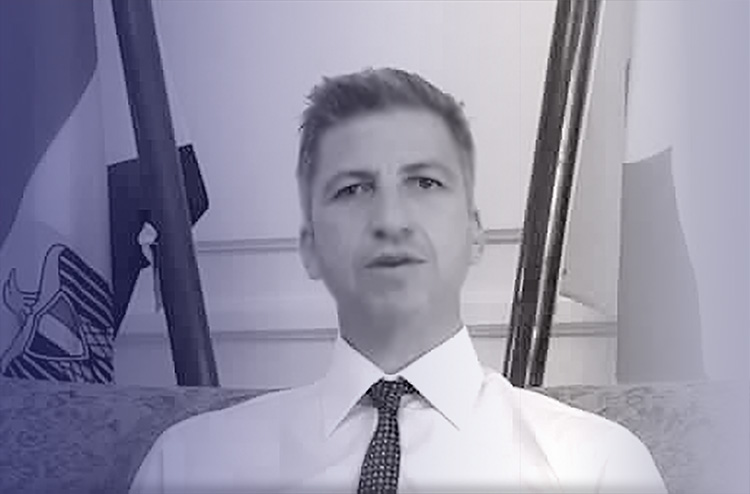 Cyprus is exerting strenuous efforts to boost oil and gas activities in its Mediterranean waters. Besides the discovery of the Calypso gas field by Italy’s Eni and France’s Total in the Cypriot Exclusive Economic Zone (EZZ), few kilometers away from Egypt’s Zohr, the East Mediterranean State is in the process for signing an agreement with Egypt to transfer its natural gas. However, the Cypriot efforts are faced with resistance from its neighbor, Turkey, as it is the only State worldwide not to recognize the Cypriot EEZ. Instead, Turkey is the only State that recognizes the “Turkish Republic of Northern Cyprus”. The controversial activities of Turkey in the Exclusive Economic Zone of Cyprus took place last month, when the Turkish Navy blocked the access of a drillship.

In order to discuss recent updates on the tension between Cyprus and Turkey in the Mediterranean, Egypt Oil & Gas had the chance to talk to the Cypriot Ambassador to Cairo, Charis Moritsis, who further commented on the country’s plans for hydrocarbon offshore exploration, as well as the cooperation between Egypt and Cyprus in the energy sector.

What are the main reasons behind Cyprus’ exploration activities in the Mediterranean?

The aim of Cyprus is to explore all the possibilities that are included in its rights in the East Mediterranean and its Exclusive Economic Zone (EEZ), so it can fulfill all legal obligations and rights that are driven by the Law of the Sea. We have relevant agreements with our neighbors in the region and I have to stress the importance of the demarcation agreement with Egypt, for both countries. This demarcation agreement and its importance were well explained by our leaders. The prospect of transfer of natural gas to Egypt from Aphrodite block 12, it would be beneficial for both countries and the European Union. We are very optimistic that very soon we will finalize all the details regarding the pending agreement. This agreement would give us the chance to prove the wealth beneath our seas and it shows the cooperation that can be developed in the region. This is an example that and others can follow.

Turkey has been resistant to the Cypriot petroleum activities in the Mediterranean and recently started to act against them. What is your comment on that?

There is not a territorial disagreement between Turkey and Cyprus. It [Turkey’s actions] is a violation of international law. Our activities regarding natural gas and its exploration are based on International Law. Our agreement for the demarcation with Egypt has been deposited to the United Nations. It is there, we have followed the international law pattern for our agreement, and we are working with our partners for the implementation of our cause, which is the exploration of natural gas for the benefit of our peoples and for the benefit and stability of our region.

Accordingly, Turkey’s actions are not against Cyprus, but against the International Law, the regional cooperation, the energy security of the European Union (EU), and the rights and prospects of the private partners of Cyprus in the region. Big companies interested in investing in the region found themselves in a very unpleasant situation when they had to reschedule some their plans because the Turkish navy was blocking and intercepting their ships and not allowing them to proceed with their activities.

It is highly important to take note and to quote the last EU’s European Council Conclusions regarding the Turkey’s aggression in the Eastern Mediterranean and Cyprus “The European Council strongly condemns Turkey’s continued illegal actions in the Eastern Mediterranean and the Aegean Sea and underlines its full solidarity with Cyprus and Greece… In this context, it recalls Turkey’s obligation to respect International Law and good neighborly relations, and normalize relations with all EU Member States including the Republic of Cyprus…”, dated 22 March 2018.

What is your comment on Turkey’s latest move of stopping the Saipem 12000 vessel?

First of all, Turkey violated international law by issuing a “navigational warning” itself, because the only Authority that is eligible to issue navigational warning in this area is the Republic of Cyprus, not Turkey. Before their illegal navigational warning, we [the Republic of Cyprus] had issued one, securing this area for Saipem 12000, and then Turkey interfered with an illegal one and all the illegal acts that were followed against the vessel. Turkey once more resorted to threats in order to advance its own interests under the pretext of “concerns” over the rights of Turkish Cypriots.

What are Cyprus’ alternative plans to strengthen its position in spite of Turkey’s recent moves?

Few weeks before the provocation of Turkey, we had the discovery in Cyprus’ Calypso Block, and Turkey then did not react. This is just to remind us that we should continue our exploration program with the ways and efforts that we know. We know how to fulfill our goals tirelessly and to maintain our rights, and we will continue doing so properly, orderly, and timely. The government of Cyprus has consistently acted with restraint, on the one hand continuing to exercise its sovereign rights to explore and exploit its natural resources, while on the other hand acting responsibly, and as a reliable actor in the Eastern Mediterranean exerting every effort to avoid friction.

What is Cyprus plan to ease this tension?

We are focusing on our program. Turkey is the one that has to operate in a reverse direction from what it is doing until now regarding this issue. It has to decide whether it will continue provocations or not. The Republic of Cyprus will resolutely continue its policy in the field of hydrocarbons, in full respect of International and EU Law. The President of the Republic of Cyprus has taken a clear position affirming that the Turkish Cypriots will benefit from the exploitation of hydrocarbons in the context of an agreed settlement of the Cyprus problem. In the bi-communal negotiations, it was agreed that natural resources will fall within the competences of the federal government. It has to be underlined that a convergence was reached by the two Communities of Cyprus, for the exploitation of Cyprus’ natural resources, and Turkey is using excuses to intervene in order to block the prospect of the growing regional cooperation.

Can you tell us more about your plans to ensure that your programs will be implemented?

The planning to ensure the timeframe for the implementation of the exploration program of the Republic of Cyprus is based on prudent acknowledgement of the technical procedure and the delays or accelerations that could occur in the course of the exploration program. Moreover, we are aware of the necessity to follow the market balances and cooperate with the willing neighbors for the advancement of the region into an alternative route and source of energy.

What are Cyprus’ short-term exploration plans in the Mediterranean?

One very important step is to see the natural gas from Cyprus’ Block 12 coming to Egypt for liquefaction. The exploration plan of the Republic of Cyprus will continue as agreed and planned with our international partners.

What challenges do you expect to face?

The biggest challenge is the hidden quantity of gas. Our challenge is to find big reserves, and the obstacle is the hard rock that we have to drill. We are doing what we have to do in order to make sure that the negative interference will be eliminated. We had examples in the past, for exploration and for drillings without any interference and we will continue in this manner.

Do you expect ExxonMobil’s coming operations in block 10 to face the same Turkish resistance? How would Cyprus respond to this?

ExxonMobil is on its way to explore all possibilities in block 10. We have its ships present in our sea nowadays. These ships will identify the targets for ExxonMobil. We do not need to question all these issues. These are licensed blocks and the companies are fulfilling their obligations according to the contracts that they have signed with the Republic of Cyprus, so we are proceeding following the agreed plan.

Are there any short-term plans for Egyptian-Cypriot joint investment in the Mediterranean?

The important thing is to finalize the agreement in order to have the pipelines transferring natural gas from Block 12 to Egypt. The cooperation between the two countries and the regional cooperation is developing with those actors who are willing to cooperate. Let’s have the people find their way to sit around the table and start discussing the possibilities and the options for the regional stability and cooperation. When Since we manage to gather ourselves around the table willing to cooperate, then the prospects can are be very promising and the only obstacles are the physical ones, not the imaginary, or political, or ideological.

Moreover, I would like to mention the EuroAfrica interconnector a promising project that foresees the connection of the electrical grids of Egypt, Cyprus, and Greece for the transmission of electricity. The project is welcomed and fostered by the three governments. We are in the process of finalizing the feasibility study for the application of the cable and this is another element of cooperation between Cyprus and Egypt in the energy sector. We are hoping for the best and soon we will have new announcements regarding this. This project could be addressed from another angle, that of the further enhancement of the relations between Egypt and the EU, since this project can help resolve the issue of energy isolation of the Eastern Mediterranean parts of the EU.

Is there any available information regarding the time frame of the EuroAfrica interconnector?

The initial point of this project goes back in February 2017, and since then we have held a series of meetings and actions fulfilling the ultimate goal. We had another landmark this January 2018 here in Egypt and another series of meetings in order to finalize some elements, and we are expecting soon, during this year, to have something tangible for announcement.