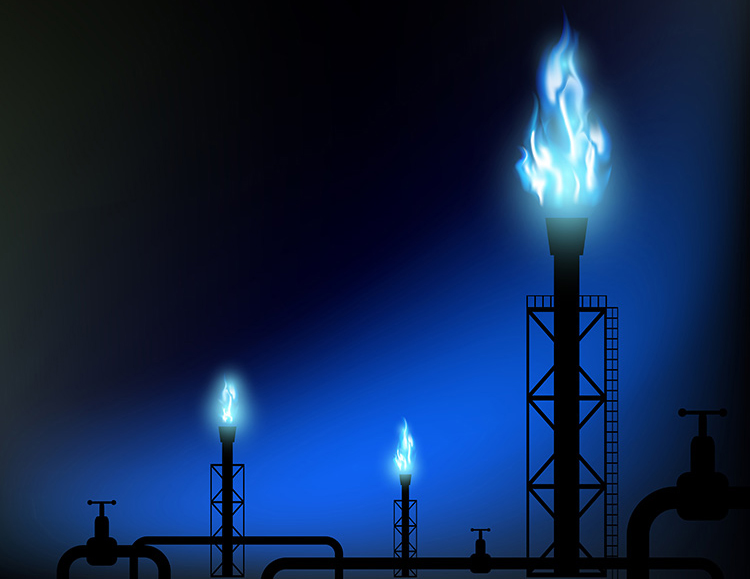 The past two decades have witnessed a noteworthy expansion of the Egyptian natural gas market to the point where gas now accounts for more than half of the country’s energy needs, according to British Petroleum’s statistical review 2016. The local government, thus, needed to continuously extend and develop its natural gas distribution grid to connect more residential, commercial, and industrial units throughout the country. Developing and expanding Egypt’s natural-gas distribution grid in terms of conducting maintenance, meeting demand, and attracting foreign direct investment (FDI) will accelerate Egypt’s efforts to attain a self-sufficient gas market.

Egypt has one of the largest gas infrastructures in the region and has developed a national distribution grid to cover the country, according to reports by both the African Development Bank and the African Union. With the aim to increase the number of citizens connected to the grid, it has been extended and upgraded on a regular basis to expand gas utilization in the residential sector. Accomplishment of this goal will not only better utilize and more efficiently allocate Egypt’s energy resources, but it will also bring economic prosperity and investment to many neglected areas, such as Upper Egypt, by connecting them to the natural-gas grid and providing for their energy needs.

While the gas-distribution grid has been expanded through completion of new gas pipelines, other pipelines are still under construction to achieve Egypt’s goal of connecting a maximum number of factories to the national grid. These pipelines will be controlled by a Supervisory Control and Data Acquisition (SCADA) system, utilizing the latest technology to control the grid through the National Network Center, according to EGAS’ annual report.

Increased usage of natural gas will contribute to Egypt’s strategic goal of preserving its environment by reducing the consumption of higher-pollutant fuels. The new pipelines will also permit the connection of more households to the national grid.

While the government is accelerating the pace of developing the national gas-distribution grid, providing solutions for local energy demand, and taking steps to attract foreign direct investment, it still faces many significant challenges in the development of its national grid, according to Moataz Sonbol, a specialist in natural-gas issues.

“The main challenges facing the development of the natural gas grid are the lack of natural gas supply, aging infrastructure, the delay in extending sewage networks, rapidly spreading slums, the continuous support to the subsided cooking gas cylinders, and the economic hardships facing distribution companies after floating the exchange rate,” Sonbol said.

With rising demand and increasing reliance on natural gas to meet local consumption –especially for power generation and electricity– the national grid reached a length of approximately 7,407 km and a capacity of 170 million cubic meters per day in 2016, a source at Egyptian Natural Gas Company (GASCO) told Egypt Oil & Gas.

While other factors play a role, the key driver of consumption in Egypt is population growth. Egypt’s population-growth rate is one of the highest in the MENA region, a trend that is likely to extend beyond the medium term due to Egypt’s youth boom. Gas-intensive industries, such as the steel and fertilizer industries, are expected to return to full utilization as the economy recovers, according to a BNP Paribas report.

The electricity sector’s share of gas consumption reached approximately 1,039 billion cubic feet (bcf), representing 63% of consumption. The industrial sector used about 379 bcf or 23% of consumption, according to EGAS’ annual report.

New gas discoveries will help fill the gap between supply and demand. In May 2017, Egypt’s Minister of Petroleum and Mineral Resources, Tarek El-Molla, said that the Zohr gas field will be connected to the national grid before the end of 2017, according to Energy Egypt. During the same month, British Petroleum (BP) announced that it has started gas production from the first two fields, Taurus and Libra, of the West Nile Delta development. Gas from the development reached the national grid in March 2017.  The ramp up to stable operations and the commissioning of all nine wells of the development’s first two fields have also been completed. All the gas produced from this field will be fed into the national grid, World Oil reported.

“Despite the obstacles facing the government, there is a will to resolve them quickly in order to reach the goal of natural gas self-sufficiency by 2018, in addition to achieving a new record in developing gas fields and put them online to be linked to the national grid,” Sonbol stressed.

Even though, the Ministry of Petroleum and Mineral Resources, via EGAS, is carrying a major part of this heavy burden, the support of private sector and international institutions has contributed to the implementation of the plan for extending and developing the natural-gas distribution grid.

In 2014, Egypt received a $500 million loan from the World Bank (WB) and a $83 million loan from the French Development Agency (AFD), according to EGAS.  Moreover, EGAS has received a financial grant of $80 million in 2015 from the European Union (EU) and the AFD for the Households Natural Gas Connection Project for Egypt. The objective of the project is to assist Egypt increase household access to a reliable, lower-cost, grid-connected natural-gas supply. The project has three components. The first component, grid expansion and household connections, will finance the investments necessary to expand gas networks in project areas and connect 1.5 million households to the distribution network. The second component, financial support for household connections in disadvantaged areas, will extend the grid to eleven relatively poor governorates. The third component, institutional strengthening, will aim to improve the governance structure, fiscal transparency, and accountability of EGAS and support the development of regulations for the gas sector, according to the World Bank.

“The grant received from the EU and the AFD will definitely help in supporting citizens who are unable to pay for the gas connection charges. Each customer receives a grant of EGP 1,500 per unit, which is an important step to overcome the financial obstacles,” Sonbol explained.

The speed with which the ministry aims to develop the natural-gas distribution grid could create challenges that could slow its completion. These barriers will be dealt with once regional development plans have been completed and included in the overall implementation strategy. The new gas law will also support the development and extension of the gas grid.

Expanding the natural-gas infrastructure to reach new areas, such as Upper Egypt, could stimulate much-needed economic development in these regions and encourage industrial development and increased investment.

Over 75% of Egypt’s households purchase LPG cylinders from a distribution network characterized by persistent shortages, an informal market, and difficult conditions for handling cylinders, according to the World Bank. Such fact urges the need to develop and extend the national gas grid.  Moreover, by the end of the natural gas’ development project, the number of households connected to the natural gas grid is expected to increase to 8.2 million households, the World Bank informed.