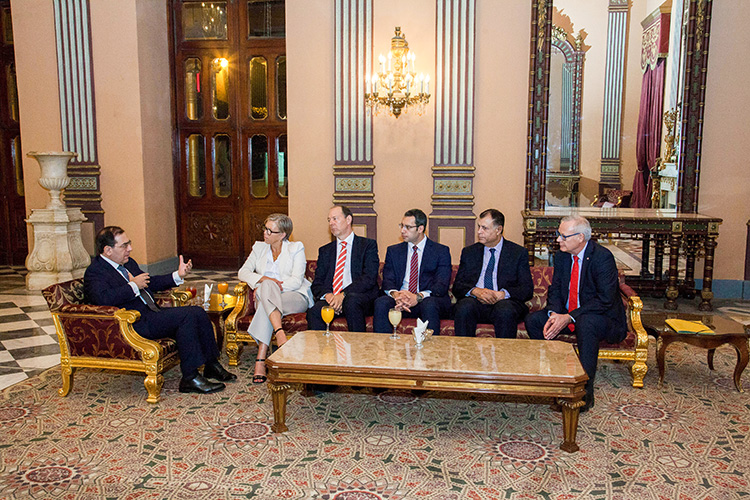 The Hamburg-based DEA Deutsche Erdoel AG, which is currently investing $500 million on its facilities in Egypt, has announced in July that it will double its production in the country in the coming couple of years.

Hanssen’s remarks came during a press conference in Cairo as the company named Sameh Sabry as new general manager of DEA Egypt. Sabry, who is succeeding Thomas Radwitz, who had been general manager for nearly three years, takes over the responsibilities starting August 1.

DEA’s operations in Egypt started in 1974. During the last 30 years, it has produced over 650 million barrels of crude oil in the Gulf of Suez. Currently, there are discussions to merge the company with the German oil firm Wintershall, making it a bigger entity.

According to Hanssen, the merger would benefit Egypt indirectly in the future as it will be a much bigger company. The merged entity is expected to be the biggest independent oil and gas firm in Europe with output of around 600,000 barrels of oil and gas equivalent per day and estimated annual earnings of more than $2.4 billion.

As for the major challenges that faces DEA, Hanssen said that in the past couple of years many companies experienced a downturn of activities in Egypt. “They needed to reduce costs, slowdown some activities to get back the cash flow, and wait for the market to improve”.

However, she added that the situation in Egypt has currently improved. “We notice a lot of good news about the situation of receivables and we are still having discussions with the Egyptian General Petroleum Corporation (EGPC) and the Egyptian Natural Gas Holding Company (EGAS) about this matter.”

For Sabry, significant changes have happened in the investment climate in Egypt and the oil and gas in particular. “This is mainly because of the modernization program and the liberalization of the natural gas market in Egypt”.

During her third visit to Egypt within six months after joining DEA as CEO, Hanssen met with the Petroleum Minister Tarek El-Molla to reinforce DEA’s continued commitment to the country. She mentioned that there are ambitious work programs which are currently under execution for the Gulf of Suez and Disouq assets.

She added that DEA has negotiated the renewal of two concession agreements in the  Gulf of Suez and is waiting for the parliamentary ratification of them, according to Hanssen. However, this does not stop DEA from starting the investment in the area.

“We already started our investment in the Gulf of Suez with the assumption that the agreement comes on time, and this is a message of trust in the Ministry of Petroleum and in the Egyptian government,” Sabry added.

In respect to further plans, the CEO renewed DEA’s interest to look into further opportunities, such as exploration licenses. DEA is currently evaluating the blocks offered in EGAS’ latest bid round.

Not only DEA cares for its projects and operations, it is also committed to its CSR program.

In 2018, the company started a medical convoy in Ras Badran and during the past three months, the convoy covered different villages around the company’s concession area. About 600 people were examined. The convoy will continue until the end of August.

Hanssen additionally confirmed that Egypt is very well placed to become an energy hub in the region. “Egypt has export capacity; it has a lot of new gas coming on, including our gas. Egypt is well located and has a big internal domestic market. From our prospective, we see the support of Egypt as a gas hub as very logical,” she added.

During the press conference, Hanssen thanked former general manager Thomas Radwitz for his achievements. “During his assignment, DEA made lots of progress in a time when Egypt is getting ready to become a regional energy hub,” she said.

From his side, Sabry explained that he is looking forward to DEA’s upcoming tasks in Egypt. “One of my priorities will be to execute our existing projects in the country in order to deliver sustainable growth,” he explained.