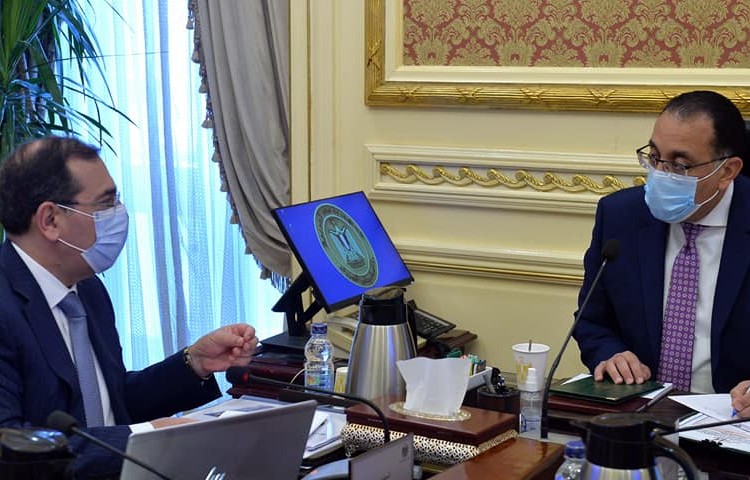 Prime Minister Mostafa Madbouly met with Tarek El Molla, Minister of Petroleum and Mineral Resources to review a number of investment opportunities in the refining and petrochemical sectors, in the presence of Saad Helal, Chairman of the Egyptian Petrochemicals Holding Company (ECHEM).

At the beginning of the meeting, the Prime Minister highlighted the state’s interest in expanding the projects implemented in the petrochemicals sector, in support of this important industry, so that it would keep pace with the latest global technologies in this regard, pointing to the role of this industry in providing added value to our wealth and natural resources, as its positive impact is reflected on the national economy.

Madbouly stated that there are a number of promising opportunities and important investment projects in the petrochemical sector, which are to be presented to the private sector, whether to participate in them or be fully implemented by the private sector.

The implemented projects include the Midor refinery expansion project, of which the trial operation was carried out for the second phase last May. This project aims to maximize the production of petroleum products, by increasing the current refining capacity from 100,000 to 160,000 barrels per day (bbl/d), by adding 5 new units and expanding some existing units, in order to contribute to covering the local market’s needs of high-quality petroleum products.

During the meeting, El Molla explained the situation of the hydrogen cracking complex project in Assiut, which is expected to start operating during Q4 2023, pointing out that this project aims to establish a complex for the hydrocracking of the mazut produced from the Assiut plant as feed material, to produce petroleum products of high economic value to fully meet the needs of the local market in Upper Egypt and to provide import from abroad.

The refining projects being implemented also include the construction of a coking complex, including a gas recovery unit (VRU), and a project to establish an asphalt production unit (VDU), in addition to the projects of establishing new atmospheric distillation units, including a gas recovery unit, at El Nasr Petroleum, Alexandria Petroleum, and Assiut Petroleum Refining companies.

El Molla explained that the petrochemical sector projects being implemented include the medium-density wood board (MDF) project, which is expected to start operation by the end of this year, noting that this project aims to produce 205,000 cubic meters annually of medium-density wood boards (MDF), depending on 250,000 tons annually of Egyptian rice straw as the main raw material for the project to meet part of the growing needs of the local market in addition to contributing to reducing the environmental pollution.

The minister added that the projects being implemented in the petrochemical sector also include a project for the production of methanol derivatives, as well as the establishment of a petrochemical complex in the economic zone in the Suez Canal axis.

Madbouly praised the efforts made in this sector to prepare a number of investment opportunities and present them to the private sector, especially since the proposed projects have integrated data, and even initial feasibility studies, directed at quickly submitting them to investors.