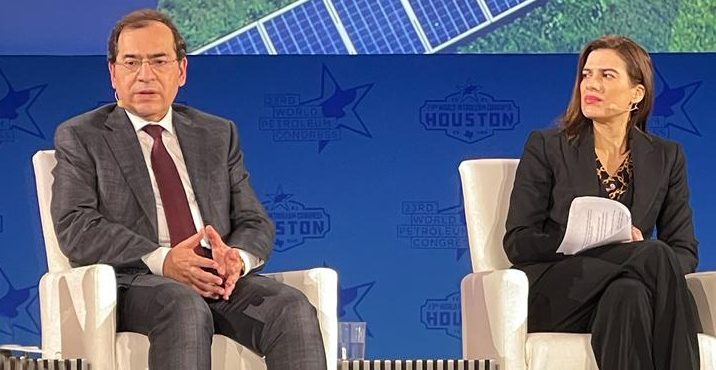 Minister of Petroleum and Mineral Resources Tarek El Molla participated in a ministerial discussion session at the World Petroleum Congress in Houston, USA, the ministry said in a statement.

The session titled “Energy Cooperation: A New Agenda in a Changing Energy World” had a variety of different speakers, including Cypriot Minister of Energy Natasa Pilides, Secretary of State at Romania’s Ministry of Energy George-Sergiu Niculescu, US Under Secretary of State for Economic Growth, Energy, and the Environment Jose Fernandez, and Chief Administrative Secretary at Kenya’s Ministry of Petroleum and Mining John Mosonik

Egypt believes in the importance of cooperation with other countries around the world as an effective means to confront challenges in the field of energy, El Molla said during his speech. He explained that Egypt has strengthened the relations of regional cooperation in the field of energy, through projects linking natural gas and electricity transmission networks for the mutual benefit of all sides.

El Molla added that Egypt has recently sought to expand the scope of regional cooperation in the field of energy by establishing the East Mediterranean Gas Forum (EMGF), which has become an international organization capable of playing a prominent and vital role in the global arena.

Pilides emphasized the importance of cooperation with Egypt, especially in the field of energy and natural gas, which plays an active role in achieving energy transition. She also reviewed her country’s efforts to support efforts to combat climate change.