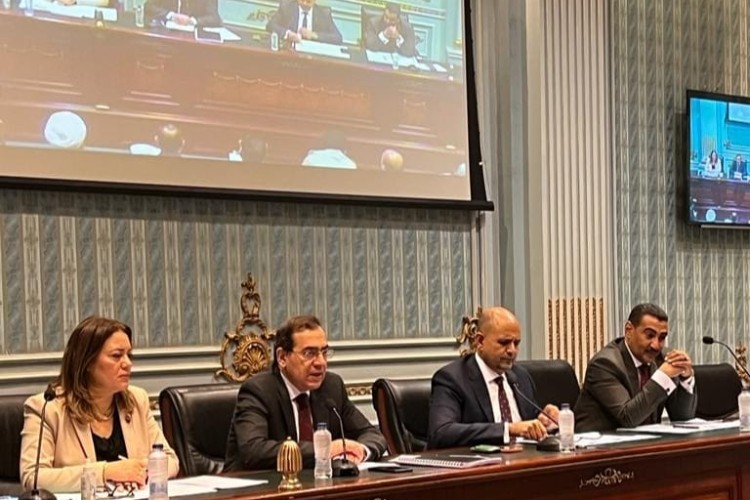 Minister of Petroleum and Mineral Resources Tarek El Molla highlighted the importance of requests for briefing and inquiries submitted by parliamentarians about the course of petroleum work in light of its supportive performance for the national economy and the local market.

El Molla’s notes came during his meeting with members of the Parliament’s Energy and Environment Committee.

The minister stated that the Ministry of Petroleum and Mineral Resources is keen on continuous communication and has official websites on the internet and official accounts also on social networks (Facebook, Twitter and Instagram…) to provide correct information, adding that the Ministry is aware of the importance of this in light of the false information that is sometimes circulated for other purposes.

He emphasized that the Ministry has been diligently following up on everything and plans to announce oil discoveries, starting immediately after the evaluation of the discovery and defining plans for its development, and then the disclosure is announced through the official spokesperson of the Ministry and in full coordination with the Cabinet, El Molla noted. He also touched on a recent disclosure  that confirmed there is indeed a new discovery.

El Molla affirmed that the Ministry, through its holding companies, in cooperation and coordination with Chevron, is working on evaluating the discovery and generating a plan for its development. An official announcement of all the details will be made.

El Molla reviewed efforts to develop oil and gas discoveries to add new production and compensate for the natural decline of wells, and what the natural gas industry has achieved in terms of expansion in the local market. He also reviewed efforts to maximize the utilization of mineral wealth, which is being worked on to increase its contribution to the national income to 5% by 2030.

The minister gave a presentation on the petroleum sector projects in refining and petrochemicals, digital transformation, emissions reduction, and training of petroleum and mining cadres, which include training programs for workers. He outlined that everyone understood their importance in the results and stability achieved by the oil and gas industry in Egypt, which continues to benefit from the unlimited support of President Abdel Fattah El-Sisi, the government, and economic reform policies.

The minister also stated that the private sector now has broader horizons to participate with the government in accelerating the implementation of available investments to serve the economy of our people in various governorates of Egypt, which is currently witnessing an unprecedented development boom.