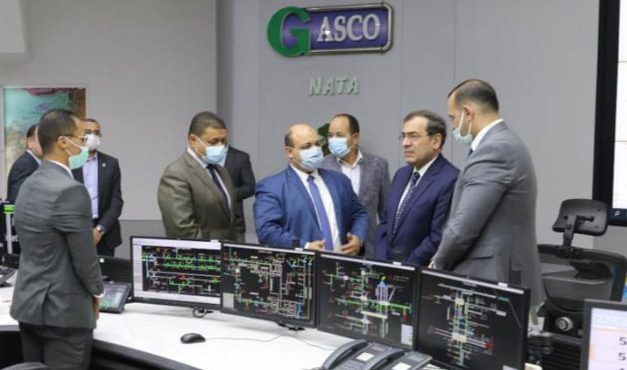 Minister of Petroleum and Mineral Resources Tarek El Molla inspected the National Advanced Transmission and Automation Center (NATA) in New Cairo, which is operated by the Egyptian Natural Gas Company (GASCO), the ministry said in a statement.

The visit was to follow-up on the center’s work after its development and to check on the status of a cutting-edge network, which supplies consumers across the country with their natural gas needs.

El Molla pointed out the importance of the control center development and the upgrades being implemented in the energy market as part of the sector’s Modernization Project. The initiative aims to achieve the highest possible levels of efficiency in managing and operating the gas transport network and lines that extend from northern Egypt to the south and from east to west.

The minister further highlighted that NATA has a distinguished role in supporting the unprecedented development projects in Egypt. It helps meet the needs of citizens in light of the expansion of the national project to deliver natural gas to households across Egypt. NATA’s role in the Haya Karima (‘Decent Life’) initiative, to develop the villages in the Egyptian countryside, is also crucial.

The inspection tour was followed by a meeting chaired by El Molla to review the progress of a number of the most important projects being implemented to expand the transportation and supply of natural gas to cities through pipelines and projects to support the infrastructure of the network.

During the meeting, GASCO’s Chairman Yasser Salah explained that the 120 km Ameriya/Alamein gas pipeline project is currently underway to start delivering gas to the northern coastal areas and to the new City of Alamein. In addition, the 170 km West/Met line project is also making good progress, aiming to maintain gas supplies at the required rates. The expansion of the Dahshur compressor station, which will help increase gas quantities in Upper Egypt, was also discussed.