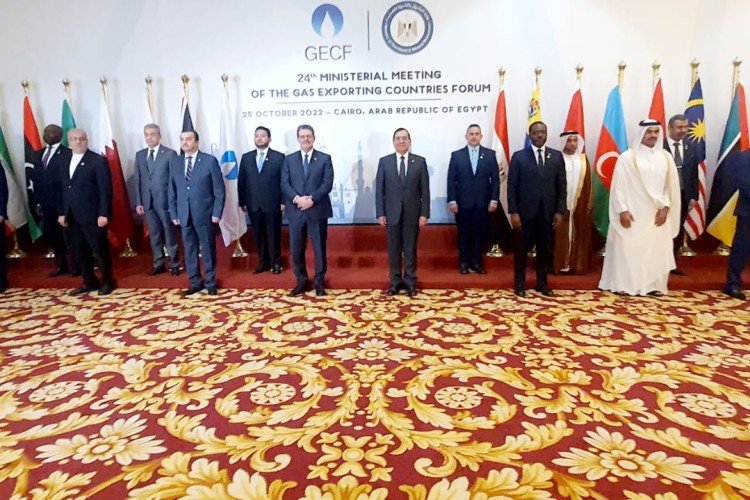 The 24th Ministerial Meeting of the Gas Exporting Countries Forum (GECF) was held on 25 October 2022 in Cairo and chaired by Tarek El Molla, Minister of Petroleum and Mineral Resources of Egypt, in his capacity as President of the GECF Ministerial Meeting for 2022.

In his opening remarks, Minister El Molla said: “We are convening at a critical time when global efforts are dedicated to achieving the energy trilemma for security, sustainability, and affordability. As the cleanest hydrocarbon fuel, natural gas is seen as the perfect solution that strikes the right balance and will continue to play a key role in the future energy mix. Egypt is eager to work closely with all GECF members to develop applicable and realistic initiatives that ensure both energy security and a just energy transition pathway.”

During the meeting, Egypt was congratulated for holding COP 27, and messages of hope and support were expressed for its great success, noting that COP 28 will also be organized in a GECF member country, the United Arab Emirates. COP 27 and COP 28 present a great opportunity to make a case for gas in the energy transition as well as to meet UN Sustainable Development Goals, in particular in Africa’s development.

The meeting was attended by the energy ministers and top officials from Members Algeria, Bolivia, Egypt, Equatorial Guinea, Iran, Qatar, Russia, Trinidad and Tobago, and Venezuela, as well as from Observers Angola, Azerbaijan, Iraq, Malaysia, Mozambique, and the UAE.

The Minister in charge of energy of Papua New Guinea attended the meeting as a guest, as well as a high-level official from Mauritania.

Emphasis was placed on the GECF’s objective of supporting the permanent sovereignty of its member countries over their natural resources and their ability to independently plan and manage the sustainable, efficient, and environmentally conscious development, use, and conservation of natural gas resources for the benefit of their people, including through cooperation with neighboring countries without restrictions.

The meeting also reiterated the importance of cooperation and coordination between member countries and reaffirmed its support for genuine and strengthened dialogue between producers, consumers, and other relevant stakeholders with the objective to ensure the security of demand and the security of supply, as well as open, transparent, unhindered, and non-discriminatory gas markets.

In addition, this occasion underscored that natural gas markets are undergoing dramatic changes in terms of physical flows, market functioning, contractual arrangements, and investment. It observed that while gas hubs experience extreme volatility, long-term gas contract prices are more stable and predictable. It expressed great concern with regard to the attempts to alter the price discovery and risk management functions of markets and to impose politically-driven price caps. It underlined that such artificial intervention in market functioning can only aggravate market tightness, discourage investment, and be detrimental to producers and consumers alike.

The importance of critical energy infrastructure (both national and international) was also emphasized for its importance in facilitating a free flow of gas and stable functioning of global gas markets and condemning any deliberate attacks to damage such infrastructure.